Trees Around the World

For millions of homes around the world, putting up a Christmas Tree signals the start of the holiday season. And in many cities, towering evergreen fir trees take center stage as the holiday season rolls around each year.

The Christmas tree owes a great deal of its popularity to Queen Victoria. In 1846, the Illustrated London News published a sketch of the influential monarch and her family celebrating the holiday around a Christmas tree at Windsor Castle. The custom caught on quickly, and the rest, as they say, is history.

As the holiday season nears, let’s take a look at some of the most spectacular and fascinating Christmas trees around the world.

Gratitude is synonymous with the holiday season, and no tree represents this value better than the one that stands in Trafalgar Square in London.

Donated by the city of Oslo every year since 1947, the 20-meter Norway spruce is an annual gift to the British people as a token of thanks for their support to Norway during the Second World War. Decorated in traditional Norwegian style and 500 white lights, the highly-anticipated tree lighting ceremony takes place on the first Thursday of December every year.

Even though the Trafalgar Square Christmas Tree is steeped in history, it seems the evergreen has also kept up with the latest trends. Since 2012, the iconic tree has been connecting with its legions of fans via its humorous Twitter account. 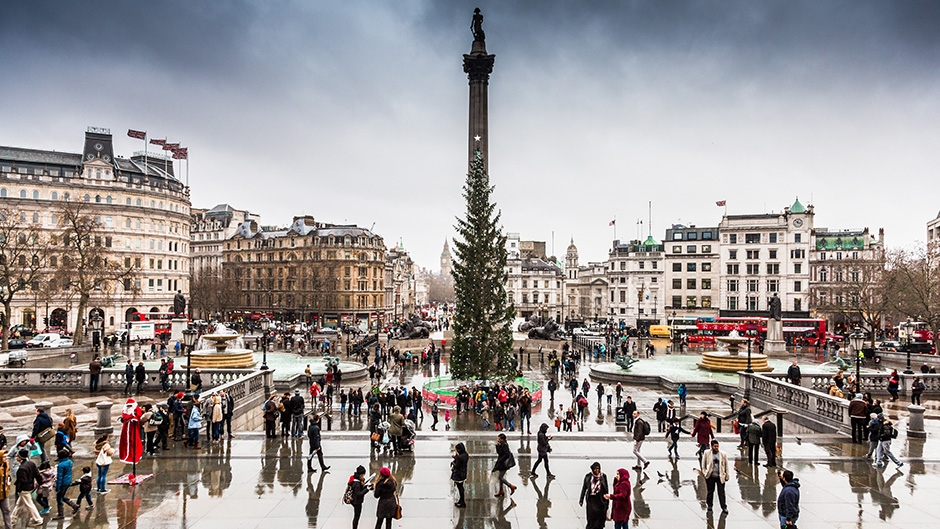 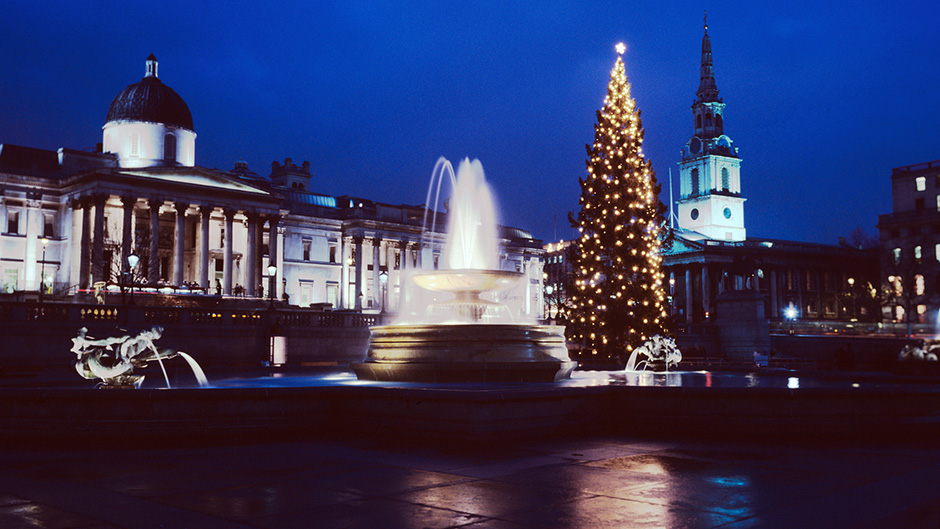 Visited by 125 million people each year, the Rockefeller Center Christmas Tree in New York is arguably one of the most recognizable in the world. But the iconic evergreen is much more than the tree.

The tradition began in 1933 when workers decorated a balsam fir in front of the landmark soon after its completion. Since then, it has served as a focal point for a whole host of holiday activities for New Yorkers and visitors alike. The ice-skating rink at the base of the tree has brought joy to thousands since 1936, while millions watch the lighting ceremony in anticipation of the holiday season.

Christmas in New York would simply not be the same without the Rockefeller Center Christmas Tree.

2013 Rockefeller Center Christmas Tree Lighting by Anthony Quintano is licensed under CC BY 2.0

The 2012 Rockefeller Center Christmas Tree Lighting by Anthony Quintano is licensed under CC BY 2.0

Shops around the world go to great lengths to decorate their Christmas trees in hopes of catching shoppers’ attention in the lead up to the holiday season. But there’s one tree that certainly stands out from the pack.

Galeries Lafayette, the world-famous department store in Paris, has been putting up some of the most delightful and outlandish Christmas trees for over a decade. Standing under the art-nouveau ceiling, the tree is decorated around a central theme each year. Taking inspirations from the arctic, the tree in 2016 was constructed entirely from paper, bringing the atmosphere of a white Christmas to shoppers.

The theme this year is “Spectacular, Spectacular”, and it’s fair to say the department store has delivered a Christmas tree which even the Grinch might find hard to resist. 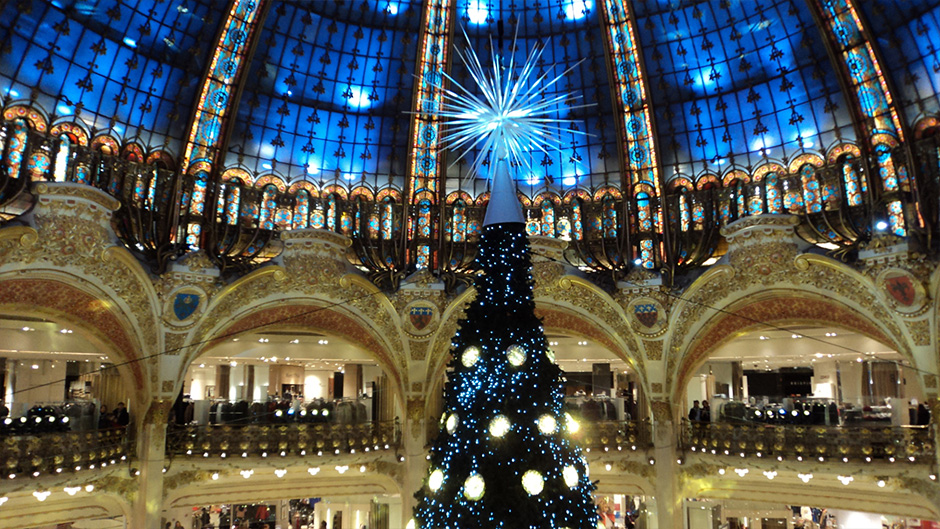 Galeries Lafayette Christmas by ErasmusOfParis is licensed under CC BY 2.0

Speaking of daring takes on the Christmas Trees, the Tree of Light in the Rjksmuseum in Amsterdam is an innovative forerunner.

Unveiled in December 2013, the 7-meter display designed by Studio Droog was a 3D holographic Christmas tree. Installed in the atrium of the Rijksmuseum lobby, the tree was brought to life by four projectors and a 6 by 7.5-meter canvas made up of 33 acrylic panels.

Those who wish to experience the surreal Christmas tree first-hand maybe disappointed to know that the installation ended in January 2014. Nevertheless, there are plenty of videos on social media for your eyes to feast upon. 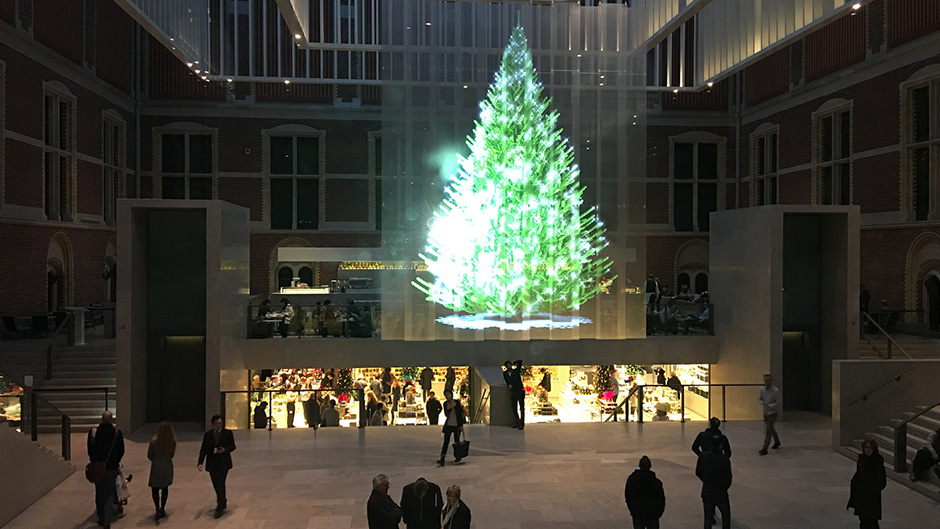 The holographic Christmas tree at Rijksmuseum by shauny2270 is licensed under CC BY 2.0

Untitled by Franklin Heijnen is licensed under CC BY 2.0

The tradition of putting up a Christmas Tree has spread far and wide. Romantic Tower Tree in Everland, South Korea, stands as a testament to the global reach of the holiday symbol.

Since 2015, South Korea’s largest theme park has been delighting visitors with the gigantic Christmas tree as the holiday season arrives. Standing at 26 meters tall and weighing at 25 tons, the evergreen located at the center of the theme park boasts not only a stunning light display on its branches and a star made of 3,600 crystals at the top, but visitors can also immerse themselves in a dose of holiday magic inside the tree, which is decorated with a chandelier and many other glistening installations.

Inspired by time-honored holiday traditions, the theme park has designed a variety of Christmas-themed activities for young and old, all centered around the evergreen. While most Christmas trees are taken down after the holiday season’s over, gardeners at Everland will put a different costume on the towering fir tree as the seasons change, allowing it to greet visitors all year round. 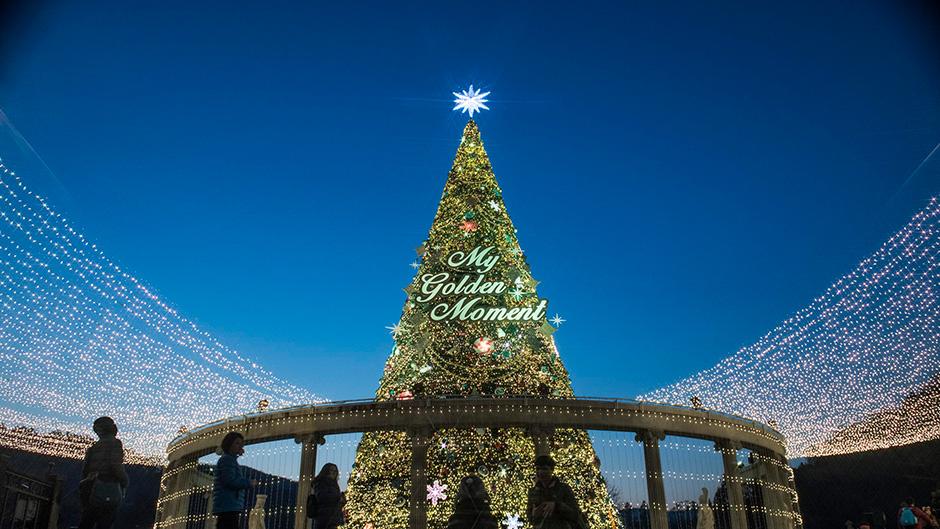 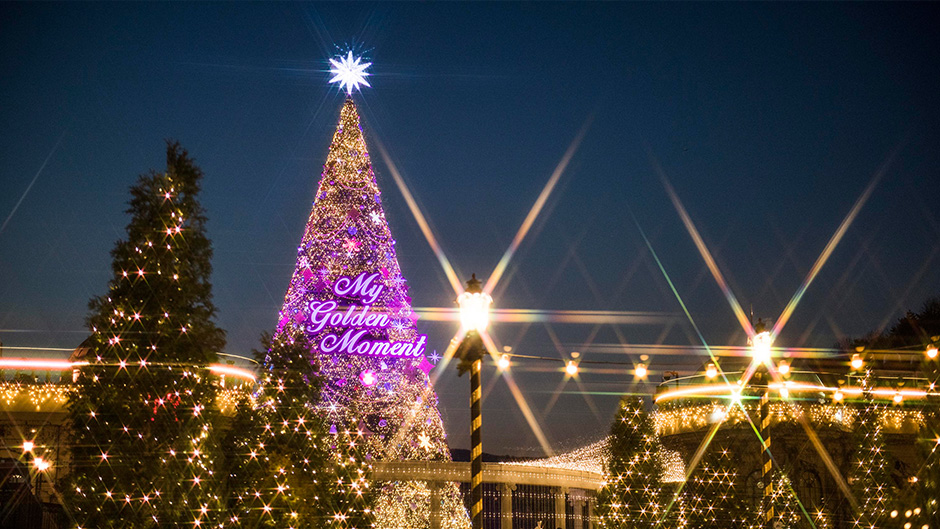 Inside of Romantic Tower Tree 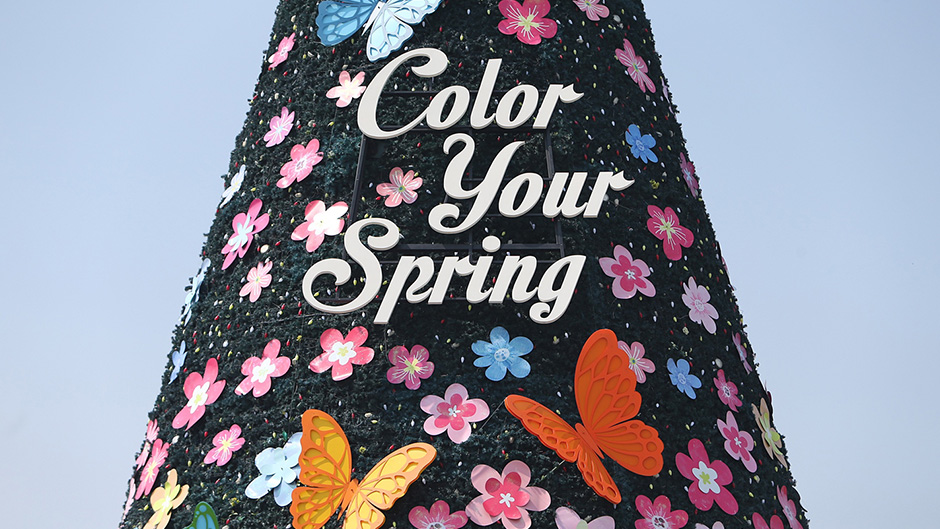 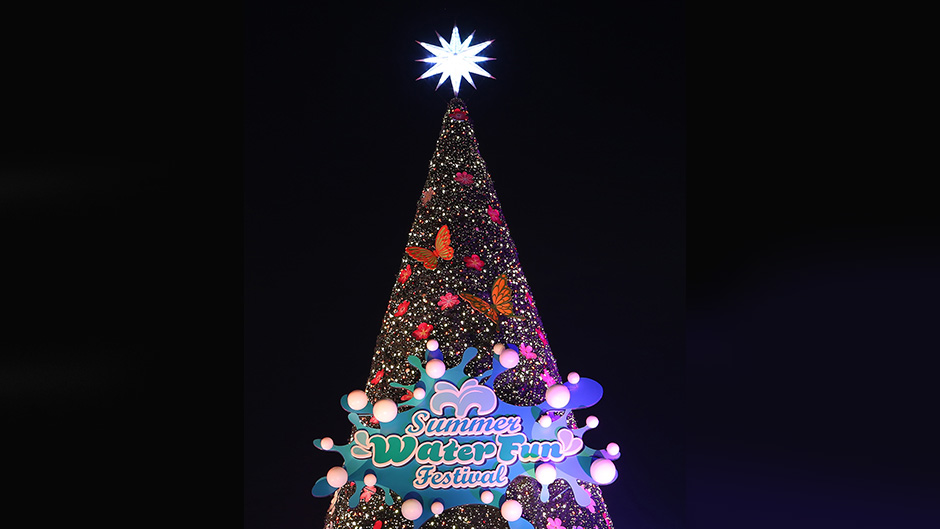 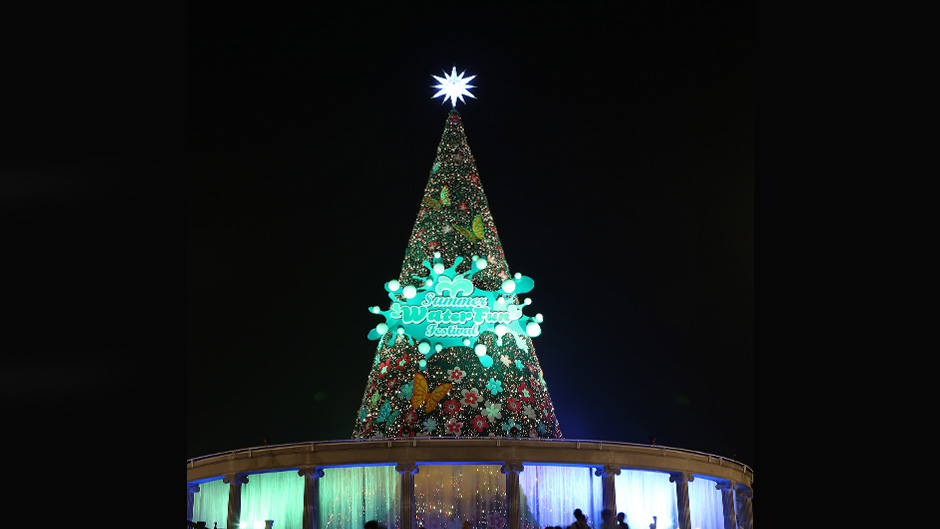 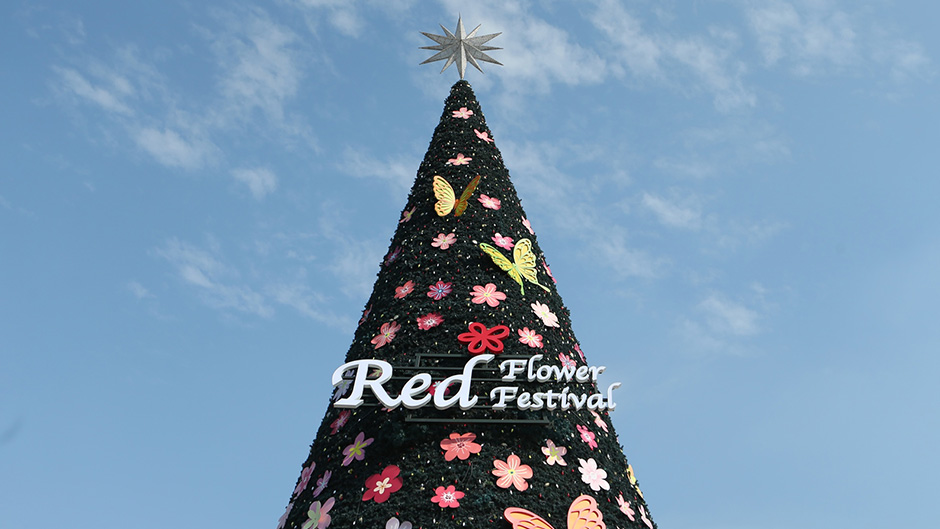 Packing for Your December Adventure: How to Find the Right Outfit