Fu Bao, the popular baby panda at Everland, South Korea’s largest theme park operated by Samsung C&T Resort Group, has already passed 300 days of age and is racing towards her first birthday next month. Weighing a fraction under 200 grams when she was born, she has already grown to a little over a healthy 32 kilograms – an incredible 160 times her birth weight. An average female adult giant panda can weigh as much as a hundred kilos, so little Fu Bao still has some growing to do.

The rises and falls of young Fu Bao

Recent days have seen Fu Bao eagerly following the example set by her mother Ai Bao in climbing almost every vertical object she comes across. After many failed attempts, she is finally becoming an expert tree climber.

As a panda, the ability to climb trees is an essential life skill, as much time is spent sleeping and resting comfortably in branches high above the ground. Naturally, the ability to get up off the ground is also a great protection from natural predators.

After building up strength in her forepaws by climbing a small tree, Fu Bao has recently managed to scale the tallest trees in the outer part of the panda enclosure. But it wasn’t all smooth sailing. On the day of her first attempt, Fu Bao lost her grip on her way back down and fell to the ground. The following day she exhibited tenacity and resilience by climbing up and down another branch than the one she had fallen from. Finally, on the third day she succeeded in climbing all the way to the top and down again without falling.

The way that the body of a giant panda is built makes it easier to climb upright trees rather than horizontal branches. Pandas use the strength in their front and hind legs to hug tree trunks tightly.

It also wasn’t that long ago that Fu Bao had to practice standing up using all the strength in her rear legs, but now she’s running around all over the place.

Growth of a young panda

As with all growing pandas, Fu Bao’s sense of independence is becoming stronger by the day, as is the realization that she can do things by and for herself. When mother Ai Bao enters the room early in the evening to call it a day, Fu Bao doesn’t stop her frolicking. And while until recently she would only go to sleep with her mother, she’s recently taken to sleeping in a room by herself about once every two or three days.

The pranks that Fu Bao is playing on her mother have also increased in intensity, but this is all part of the process of a panda growing up and learning to live in the world. When Fu Bao gets a fright while playing and darts up to the top of a tree, she’s showing that she’s a panda who has been well trained by her mother.

Fu Bao is also becoming a panda with stronger opinions. Even though Ai Bao is a mother who likes to look on and watch her child do things by herself as much as possible, sometimes she feels the need to step in and give a scolding. That’s when Fu Bao exhibits a previously unseen resistance and rebellious streak. But that too is to be expected as part of the process of a panda growing up, as pandas usually go off and live apart from their parents between the ages of 18 months and two years. 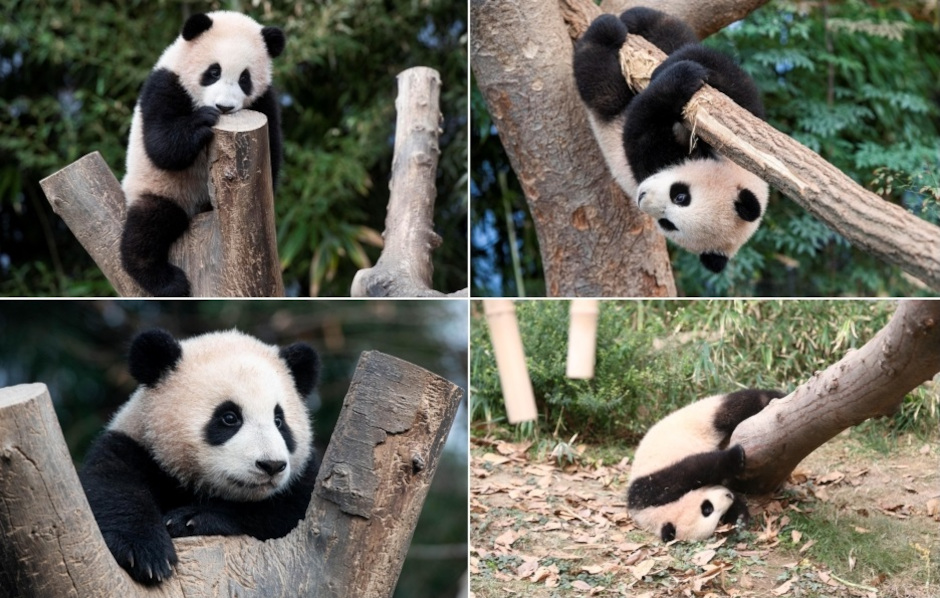 Lately, Fu Bao has begun nibbling at bamboo. While she was teething, she would sit next to her mother and chew on a bamboo stem, but now she has gone beyond that and even swallows it in small amounts – such a change from the time when she viewed bamboo more as a toy than something to eat.

Now that Fu Bao has developed a taste for bamboo, the shoots of that plant are also now her newfound interest. Taking her cues from Ai Bao, she now peels off the hard outer bit and bites into the soft inner parts. Fu Bao’s baby teeth have begun falling out, and when her adult teeth are all in place she’ll be fully ready to munch on bamboo just like her mother.

It’s fun watching Fu Bao grow big and strong and learn to eat and climb. Somehow it reminds us of our own adolescence, as we sought to become more independent from our parents and make our own way in the world. Soon it will be Fu Bao’s first birthday. Panda fans, keep wishing for the good health and strong growth of Fu Bao!

Raemian: Building a new future as a Life Companion

Feeding food: The life force that is ammonia