Beanpole, part of Samsung C&T’s fashion group, has unveiled the official uniforms Team Korea will sport at August’s Olympic Games in Rio de Janeiro. Team Korea athletes will wear the new designs at the official opening and closing ceremonies of the much-anticipated event.

The uniforms were on display at a recent showcase in Seoul’s Nowon district held in conjunction with the Korean Olympic Committee (KOC). The event saw Beanpole, the KOC and others exhibit the national team’s latest range of uniforms and equipment. 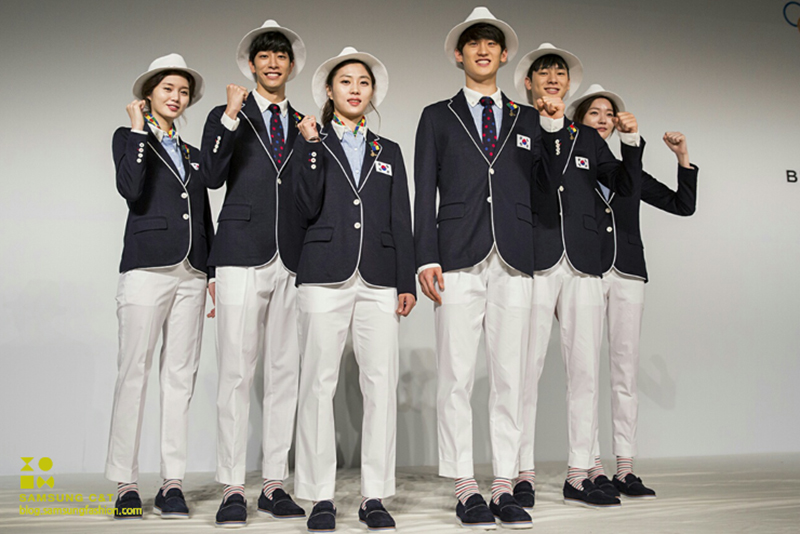 Inspired by hanbok, traditional Korean attire, the Beanpole uniforms are intended to emphasize a Korean sense of beauty, making use of straight and curved lines and three-dimensional silhouettes. Messages of encouragement will be collected and embroidered onto the jackets’ inner linings.

Many had looked forward to seeing the new outfits after the London 2012 uniforms, also created by Beanpole, were selected as the best on display at the London Olympics by British newspaper The Times.

A number of leading fashion brands have represented their nations at important global events such as the Olympics. Some of these include: Giorgio Armani (Italy), Ralph Lauren (USA), Lacoste (France), Stella McCartney (UK) and DSQUARED (Canada). 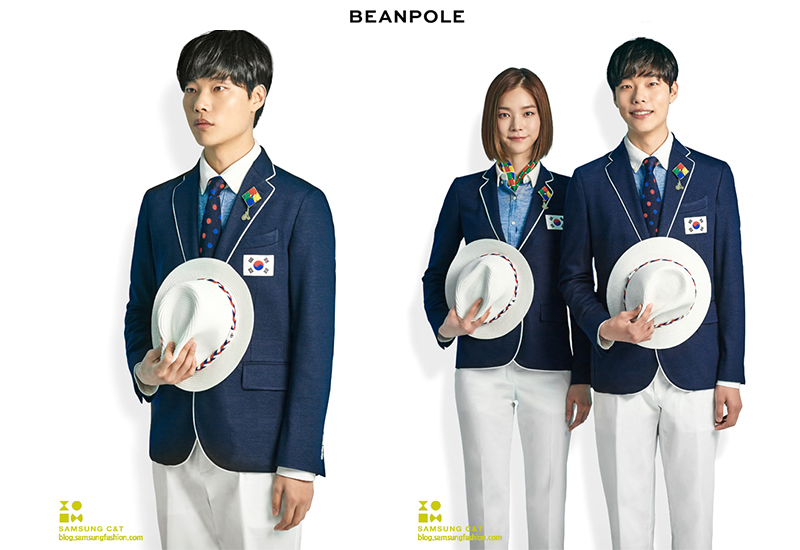 The front of the jacket has a white strip that is supposed to represent dongjeong (white cloth pieces attached to the collar of hanbok outfits), intended to symbolize Korean national pride.

The pants feature a tapered silhouette for comfort, with turn-ups for a sophisticated and neat look.

Beanpole went with a modern style in the form of navy jackets and white pants. These are matched with sky blue, linen jersey t-shirts suitable for the Brazilian climate.

The accessories make use of blue and red, the colors of the Taegeuk, the symbol featured on the Korean flag. Men will wear knitted ties, while women will wear yellow, green, blue and red knotted scarves. This same four-colored scheme will also be applied to the athletes’ hats, belts and loafers.

The linen jackets and t-shirts are wrinkle-resistant and can be machine-washed. Combined with high-performance nano-treated pants, designed to resist contamination, they will help the athletes stay at peak condition during the ceremonies.

The clothing also makes use of insect bite-resistant materials in an effort to reduce athletes’ risk of contracting the Zika virus.

The outfits also feature a knotted brooch that combines both the yellow and green of Brazil and the blue and red of Korea. The brooches will be attached to the top left pockets of the uniforms to create a sense of harmony and balance between Team Korea and the host nation.

“We have put extra effort into representing Korea’s aesthetics and colors for the Olympics, which is a global event,” said Soo Jung Kim, Beanpole’s design director. “We wanted to mix the authenticity of Korea and the dynamics of Team Korean team with a classical design that exudes order and balance.”

Beanpole also recently held a social media event at collect messages of encouragement for the Korean team, and stated that these would be carefully embroidered onto the jackets’ linings.

How Cable-stayed Bridges Are Connecting the World