Mongolia is a land of contrasts. The Central Asian nation boasts both bustling modern cities and wild steppes.

While some metropolitan parts of the country – such as the capital Ulaanbaatar – have undergone rapid changes in recent years, many of Mongolia’s rural provinces are relatively undeveloped. Smaller towns often lack the kind of infrastructure that has become the norm in larger hubs.

In recent years, though, the country has begun trying to redress this imbalance.

Samsung C&T has been an active player in Mongolia’s urban growth. The company has built numerous apartment complexes, airports and railways in major cities. However, C&T also understands the importance of developing some of the country’s more rural areas.

That is why the company has initiated several community-wide volunteer projects aimed at improving agricultural and residential infrastructure in rural areas.

In the central Arkhangai and Töv provinces, C&T’s ongoing efforts have included projects as diverse as reforestation activities, hospital reconstructions and water management.

One such C&T-led initiative is a reforestation project in the center of the country, near Ogii Lake in Akhangai province. The project began in late 2014 and is slated for completion in 2017.

This impressive lake is well-known for its remarkable fauna. It has been classified as a Ramsar Site of International Importance – a globally recognized title bestowed on important wetlands.

However, as a desert climate now pervades most of the area, the wetlands are currently under threat. The project’s goal has been to tackle this issue by planting approximately 1 billion trees, which will help nurture the soil in the area.

The project will ensure that the residents who live near Ogii Lake have access to a range of agricultural resources. Thousands of volunteers from both Mongolia and Korea have signed up to help create what is already becoming a sustainable forest management system.

Their plan includes installing 15,000 windbreaks, preparing areas for crop planting and establishing irrigation facilities. Six greenhouses are currently in the works, which will house over 30,000 fruit and vegetable-bearing saplings. The greenhouses will soon allow local farmers to grow plants such as watermelons, cucumbers, tomatoes and radishes. 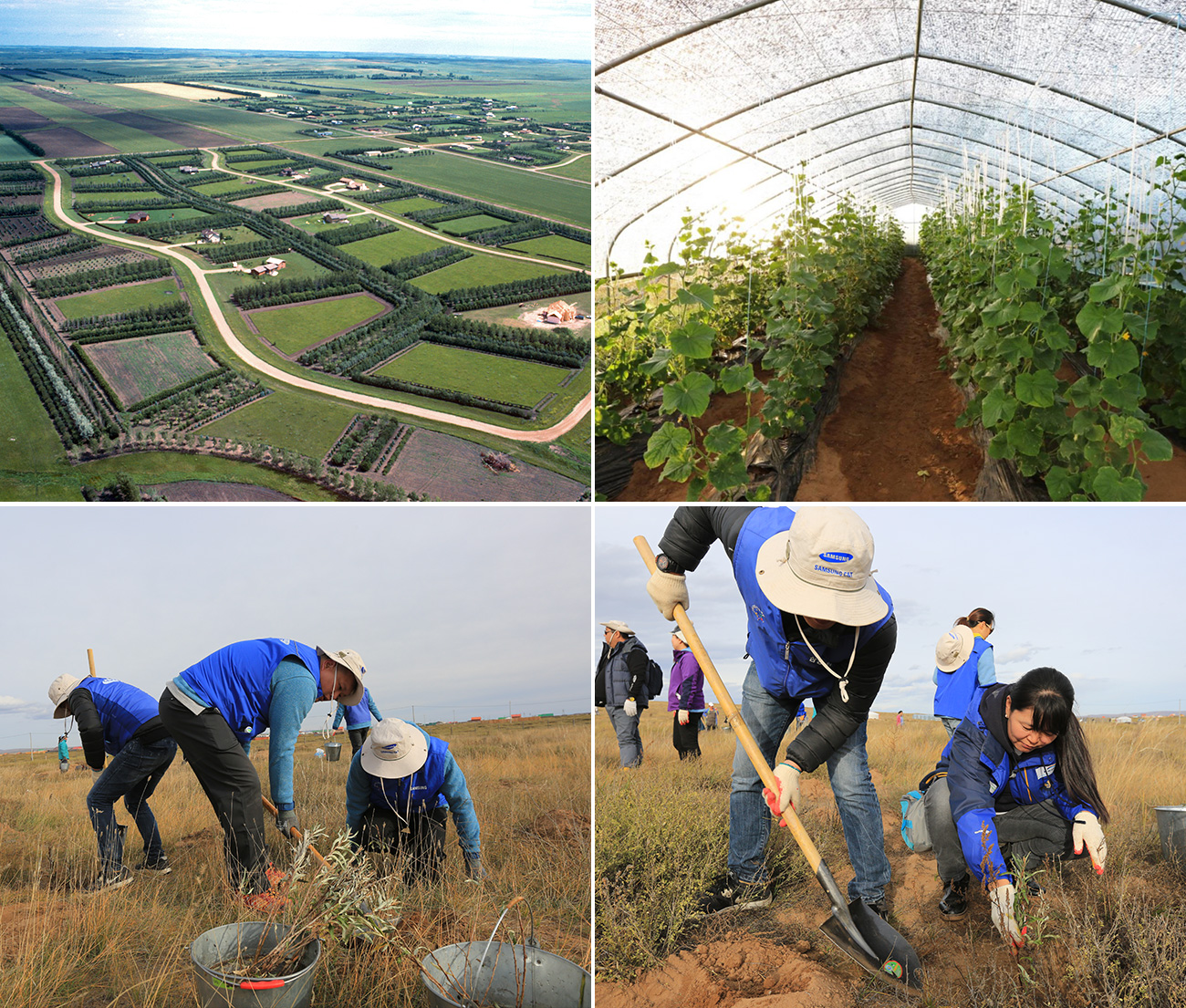 In Töv province, which surrounds the city’s capital, the company has begun renovating community hospitals and schools. Work on a range of projects is underway in the small town of Zuunmod, where C&T employees from both Korea and Mongolia have volunteered to transform the community.

Like the Ogii Lake project, this initiative has seen volunteers plant trees around the town, providing fertile land for agricultural purposes.

The company has made improvements to a community hospital. An important passageway was extended at the facility, allowing staff and patients to move between departments freely and quickly. 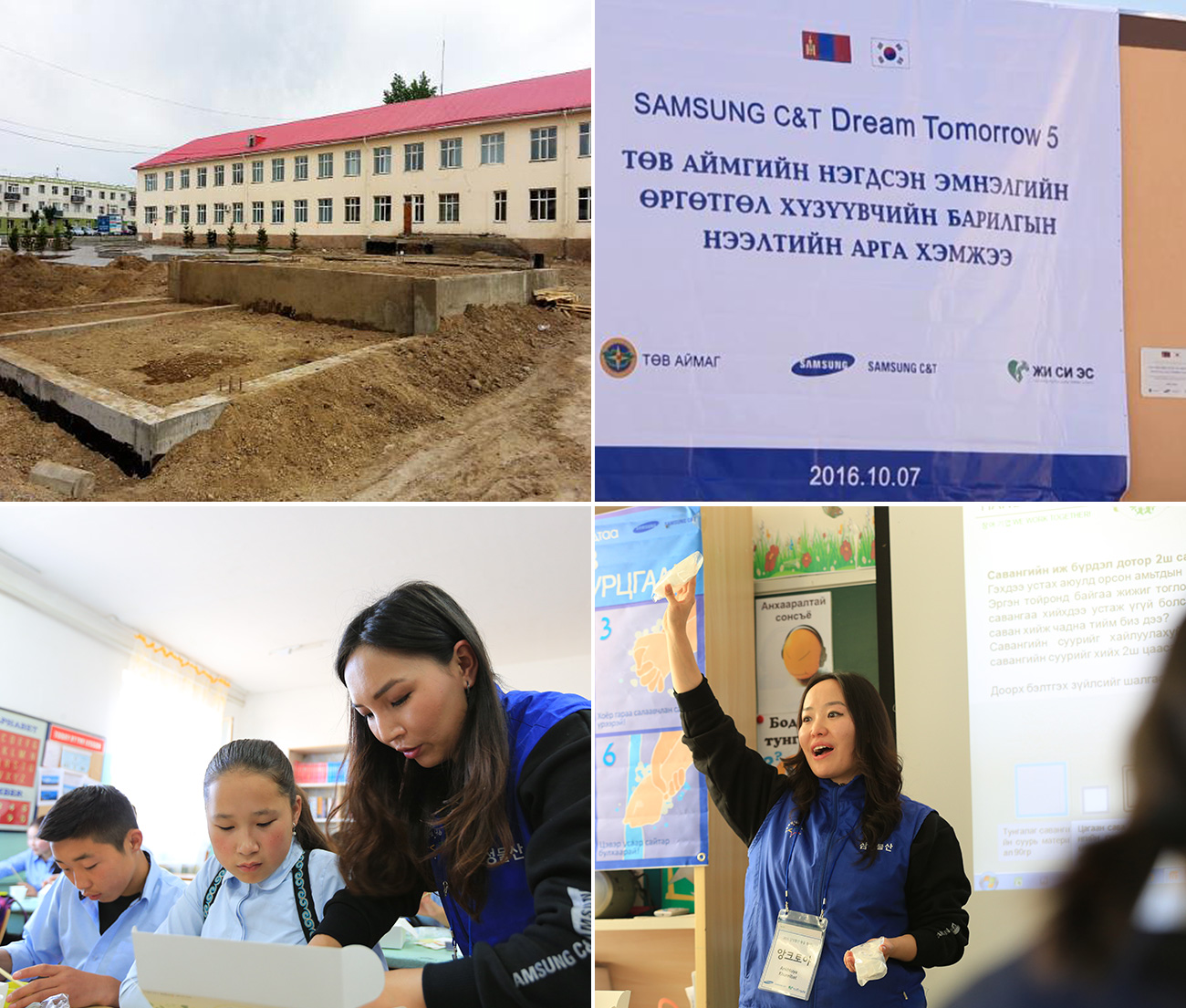 Both the Ogii Lake Reforestation Project and Dream Tomorrow are long-term visions, involving continuous and ongoing support from groups of company volunteers. The most recent C&T mission took place in early October this year.

Here, volunteers took part in tree-planting and mural-painting projects in both the Arkhangai and Töv provinces. The group also hosted cultural exchange sessions, introducing residents to a range of Korean food.

Mongolia is progressing quickly, but for many rural communities, infrastructure development is not coming fast enough. Residents living in less developed regions often have limited access to education and employment resources – making it difficult for the whole country to progress at the same speed.

However, thanks to Samsung C&T and local volunteers, reforestation and other development efforts in provinces such as Arkhangai and Töv are starting to take effect – helping rural areas grow in tandem with larger urban centers.

Samsung C&T has played an important role in improving communities worldwide, including projects in India, Ghana, and Myanmar. By investing in the future of Arkhangai and Töv, the company hopes to create further opportunities for rural communities in Mongolia too.