In busy city apartment complexes, people come and go all day long. This is especially true in Korea, where online shopping has recently hit a record high and where the home food delivery market is worth an estimated US$10.3 billion.

As a result of this trend, people are increasingly finding their apartment complexes full of strangers. Criminals are moving with the times, and are now looking for ways to break into these busy apartments, with their almost-constant flow of human traffic. That is why residents, electronics pioneers – and even construction experts – are finding ways to fight back, using the power of the internet and smart IT.

New smart home innovations are starting to hit the market, meaning home owners will soon be able to add multiple layers of security to their properties. The world is now moving into the era of the Internet of Things (IoT), internet-connected smart home tech devices that can communicate with their owners, and with each other.

A wide range of IoT security devices were revealed at January’s Consumer Electronics Show, held in Las Vegas, and many have made the news around the world. Eye-catching devices include routers that monitor your home for suspicious activity and innovative anti-hacking devices.

In fact, analysts are already speaking of a “golden era” for tech startups that specialize in IoT home security devices, while others state that the IoT industry’s “killer app” will be home security.

But IoT security is not the sole preserve of gizmo-makers and internet gurus – construction experts are also stepping up to the plate. Builders are already incorporating smart home functionality into the houses they build and are even looking at ways to use the IoT in their construction methods. And now they are ready to take the next step, embedding IoT security into the very core of their latest apartment projects.

Increasingly, phone manufacturers are moving away from passcode-lock systems – realizing they are simply too easy to hack – and toward facial recognition authentication. Constructors understand that these same tech advances can be applied to home security systems in new apartments, and are thus looking to create facial recognition-based security platforms.

Facial recognition software means that home owners can simply do away with keys, RF tags and passcodes. And in the case of young children or older residents who sometimes have trouble remembering passcodes, it allows them to come and go as they please, without compromising security.

That is why Samsung C&T’s Engineering and Construction Group is set to introduce its new Facial Recognition Access Platform, part of the IoT Smart Home Platform, in a new 1,091-household Raemian apartment complex. The complex, in Seoul’s Gangbuk district, is slated to open a model home later this year, with residents set to move in early 2019.

The platform features a door-mounted scanner that prompts residents to look into a camera. It then scans the resident’s face, checks it against the platform’s central database, and if authenticated, allows instant access.

The IoT Smart Home Platform also comprises a multi-functional movable control device called the IoT Home Cube, as well as a wall-mounted home pad, both of which allow users to place an instant emergency call if they suspect a break-in. 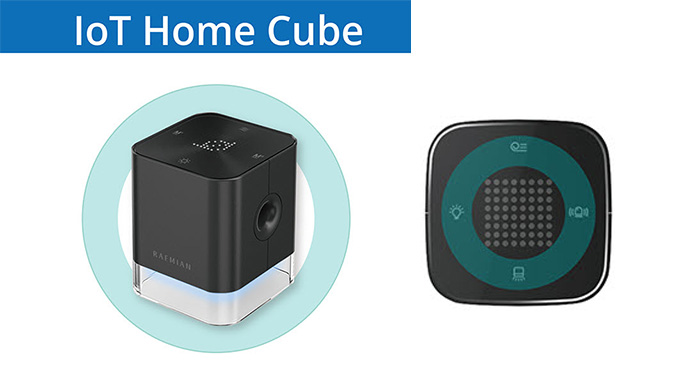 Security innovation goes beyond IoT functionality and facial recognition. Wearables are now starting to take off – and are no longer the sole preserve of fitness fanatics. Analysts say the wearable security market is booming, and will be worth a total of US$5.7 billion by 2021. After all, strapping a security device to your wrist – or that of your child – is a lot more convenient than having to remember an RF tag, a set of keys or a pass-card.

That is why Raemian is also introducing its wearable One Pass system, a wristwatch-like smart band that helps you place an emergency call if you suspect something is amiss in the apartment’s underground parking lot, access entrance gates and doors, call an elevator and more.

Constructors say that the new Raemian development will also feature fingerprint-recognition technology and a smart security locking system that automatically locks doors if it senses a stranger approaching, as well as a Bluetooth-enabled home network system.

Villains are getting increasingly smart and tech-savvy in the modern world, and homeowners with young children in particular need to feel confident that they are a step ahead.

This is why it is now paramount that homeowners are equipped with superior tech, especially when it comes to security. Responsible builders are aware of this fact – and are now looking at ways to make smart homes not just more convenient, but also a whole lot safer.

The Construction Crane Transitions into the Digital Age