Offer a Breath of Fresh Air

In the cold air of a Canadian December, the long, white blades on the immense tower began turning, as the Armow Wind facility started operations. Two-hundred seventy-three blades on 91 towers together began generating 180 MW of power, providing enough electricity for 70,000 homes.

Located on the shore of Lake Huron, about 220 kilometers northwest from Toronto, the Armow Wind facility is just one of a wide-ranging series of renewable energy projects, both wind and solar, that Samsung C&T is constructing around Ontario.

Governments and enterprises around the world are now realizing the importance of reducing their carbon footprints and moving away from fossil fuel dependence. In fact, many experts say that the need for action in this regard has never been more pressing.

However, the Canada endeavor is more than simply an environmental incentive – it is bringing about a major boost to job markets across Southern Ontario.

Steve Cho, a vice president with the trading group, describes the Windsor Solar project, another development that is part of the endeavor, as a “perfect example” of government-private sector collaboration.

Cho says, “Samsung is thankful to become part of the supportive community in Windsor. The Windsor Solar project will create hundreds of high-skilled jobs that will benefit real people in this community.”

Indeed, local jobs are the key focus of the project as a whole. In fact, all the wind generators and solar facilities were made in Ontario. Four manufacturing facilities around Ontario are building the blades and towers for the wind power projects (together with Siemens and CS Wind respectively).

Plants in the region are also making modules and inverters for the solar energy facilities, in conjunction with Canadian Solar and SMA Solar Inverters.

It is hoped that the renewable energy projects will create 900 manufacturing jobs and an estimated 9,000 opportunities for specialist workers in the province.

Nicole Risse, executive director for the Ontario Sustainable Energy Association, says, “If projects like these work with a community, they can really drive economic development.”

Canada is one of many countries now getting serious about adopting forms of renewable energy. Samsung C&T’s Green Energy Investment Agreement (GEIA), created in conjunction with the government of Ontario, represents a CAD$5 billion investment in developing a greener future.

Signed in 2010, the agreement calls for 1,369 MW of renewable power (1,069 MW from wind and 300 MW from solar) to come from seven sites around southern Ontario. That is the equivalent of almost six percent of the normal daily peak energy load for the province.

The projects are coming in three phases: Stage 1 and 2 projects are already up and running, while Stage 3 projects are currently under construction. Under the terms of the agreement, Samsung will operate these facilities for at least the next 20 years.

Already, wind farms capable of generating 869 MW of energy are operating at three locations around Ontario, with two more under development. 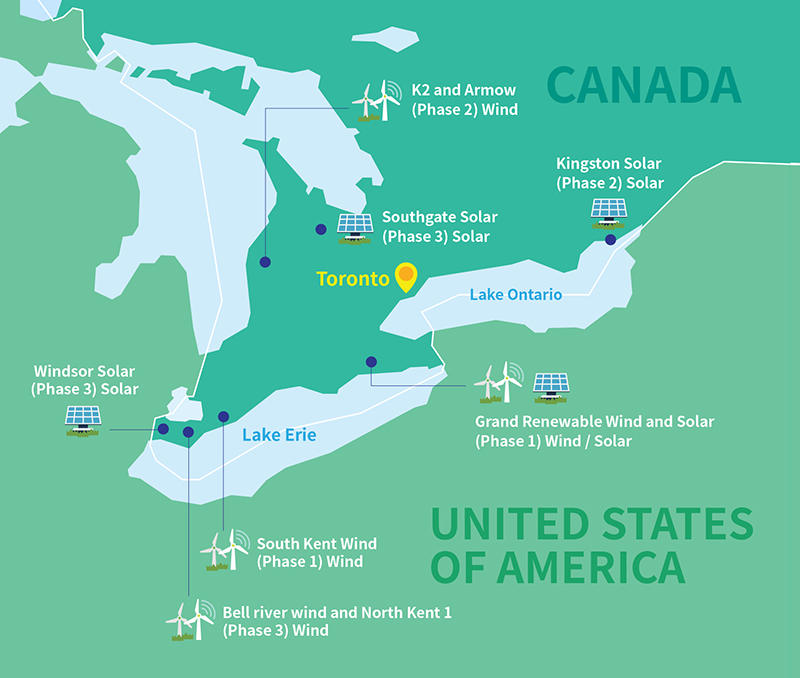 The 100 MW solar facility at Grand Renewable solar project on the Grand River is already operational, and in September last year, the 100 MW facility in Kingston also began operations.

The Windsor facility and another in Southgate are scheduled to open later this year.

Altogether, the company is creating and installing solar panels across four locations around southern Ontario. Collectively these will be able to generate 300 MW of power.

Moving toward a clean energy future is not easy and it is not something that will happen overnight, but Samsung C&T is dedicated to developing and implementing these solutions.

The investment in renewable energy is helping fuel Ontario’s changing power generation needs. It is a project imbued with significance in Ontario and aligns with a larger global shift to green-energy production.