In a world that appears to be changing rapidly, it might feel reassuring that some things remain unwavering. The strong relationship between people and copper is one of these things, as this material has been used by humans to fashion tools and jewelry since ancient times, as we explored in our own recent past.

In this article, we will further explore why copper remains so important and where Samsung C&T fits into the supply chain.

What makes copper shine for so many people

When humans first found copper thousands of years ago, it began a relationship that has continued to bear fruit to this day. This is because copper has so many attributes that have supported the growth of societies around the world.

Ancient civilizations found copper to be useful for many of the reasons we do. It is versatile, ductile, durable, and corrosion resistant, making it perfect for tools, weapons, coins, and monuments. Long before the dawn of antibiotics and modern medicine, it was also known for its naturally antimicrobial character. And of course, it shines – early jewelry was often made of copper.

Some of copper’s characteristics were not harnessed until much later. For example, because this metal is an ideal conductor of electricity, it continues to be relevant in modern advancements from smartphones to electric vehicles. It is also a preferred material for heat exchange applications because it is an excellent thermal conductor, heating up and cooling down quickly.

So, copper has stood the test of time. In fact, it has the longest recycling history of any material known to humankind, with estimates suggesting 80 percent of all mined copper over the last 10,000 years is still in use today. Because it is also easy to alloy, its uses are immeasurable – but some of copper’s main applications are shown below: 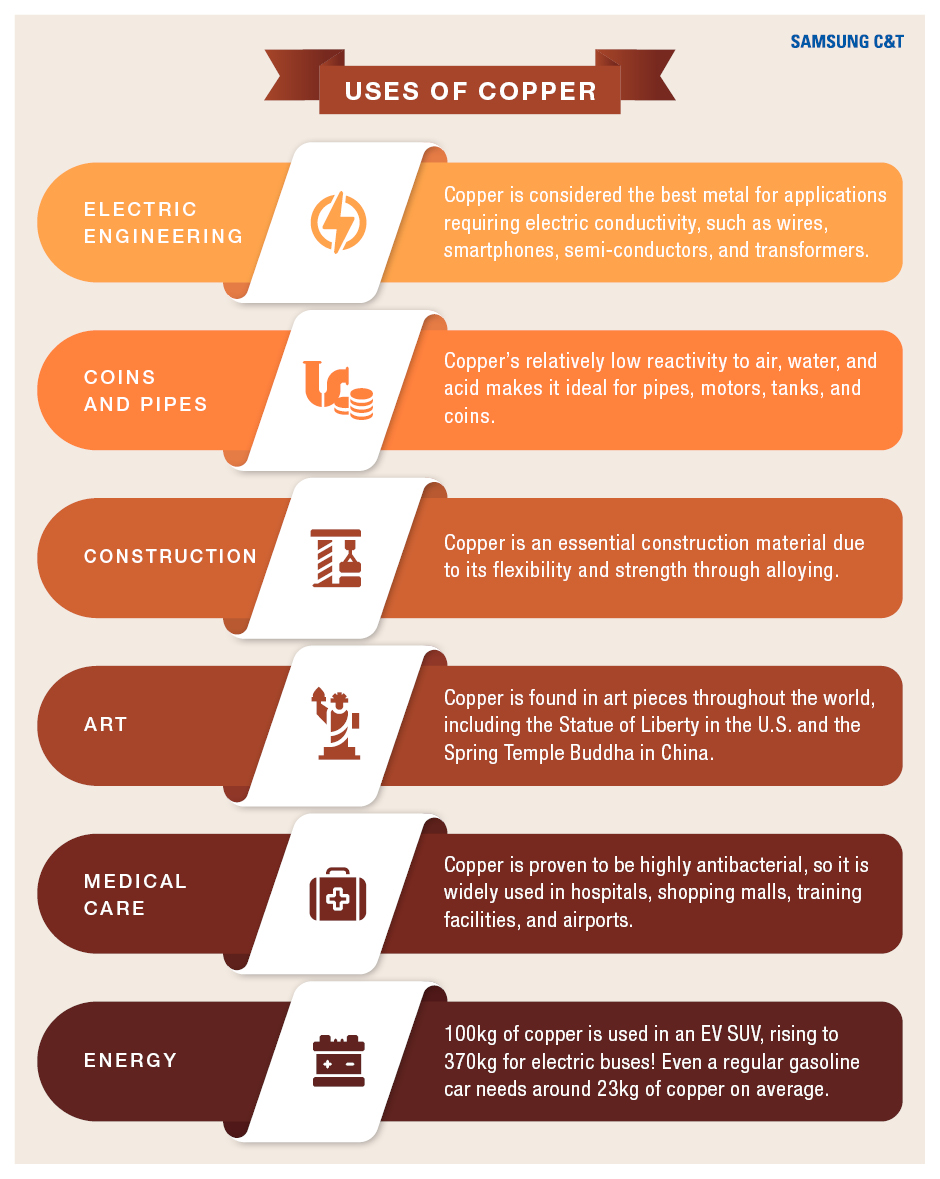 A glowing market for copper and its concentrate form

Copper has another very interesting characteristic. It has a reputation for being an indicator of the world’s economic health, giving it the nickname “Dr. Copper” among market analysts. This is because the metal is used so widely in global manufacturing that market watchers often use its price as an economic gauge.

The good news, then, is that copper has been feeding economic optimism despite challenging conditions for many people in 2020, as we saw a 35 percent rise in the price of copper from a low in March. Naturally lifted by this bullish market situation, the prospects for copper concentrates also look hopeful. Copper concentrates are an unfinished form of the metal found in the step before it is processed for the various uses listed earlier in this article.

In terms of the supply and demand picture, the map below shows the global distribution of copper ores and concentrates.

Samsung C&T shares some of that copper shimmer

Samsung C&T Trading & Investment Group started copper trading nearly 40 years ago in 1981. One of its important areas of focus has been the concentrate form of the metal.

The company has secured stable supply streams from all over the world, including copper concentrates from Mongolia, the Americas, and the Democratic Republic of the Congo. Samsung C&T has also steadily explored demand in Asia, particularly in the Chinese, South Korean, and Japanese markets.

Copper’s global value encourages a strong drive through the various stages of mining, transporting, processing, and manufacturing copper products. It is not only highly useful as a practical material, it also acts as a barometer for the world economy. With its sustainability and energy reduction potential, copper is not going out of fashion in a hurry.

BEAKER goes online and gender neutral with B_