You might drive across a massive steel bridge to work every day or walk along a small wooden footbridge at the park without giving it much thought. Some structures might be gargantuan projects that require years of planning and are designed to impress, while others might be as simple as slapping together a few planks of wood.

What they all have in common, though, is the fact that they uphold an enormous degree of weight, whether it’s from a steady stream of pedestrians or countless cars and motorists.

Deciding what kind of structure these bridges should have depends on a multitude of factors. Civil engineers need to not only consider the weight that each bridge must support but also the distance that it spans, what forces of nature it must endure, and how much time and money is available for the project. A bridge that’s built in an earthquake-prone zone will have structural requirements that are different from one that’s designed to cut across a wide channel with strong winds.

So how do bridge structures vary, and what sets each type apart?

If you’ve ever walked across a cobblestone bridge, there’s a pretty good chance it was an arch bridge. What makes an arch bridge unique is not just that it comes with an arch structure but that the shape defines how the overall load is distributed. Instead of the weight being transferred downward, the curved shape conveys the weight sideways to supports at each end.

The arch bridge has been around for millennia. But the structure was most popular during the Roman Empire, and during this time a significant number of stone arch bridges were built. Some remain standing even to this day.

Arch bridges are now built using many different types of modern materials, but regardless of that, the foundation of weight distribution remains the same. The Sydney Harbour Bridge in Australia is a classic example of the modern arch bridge. 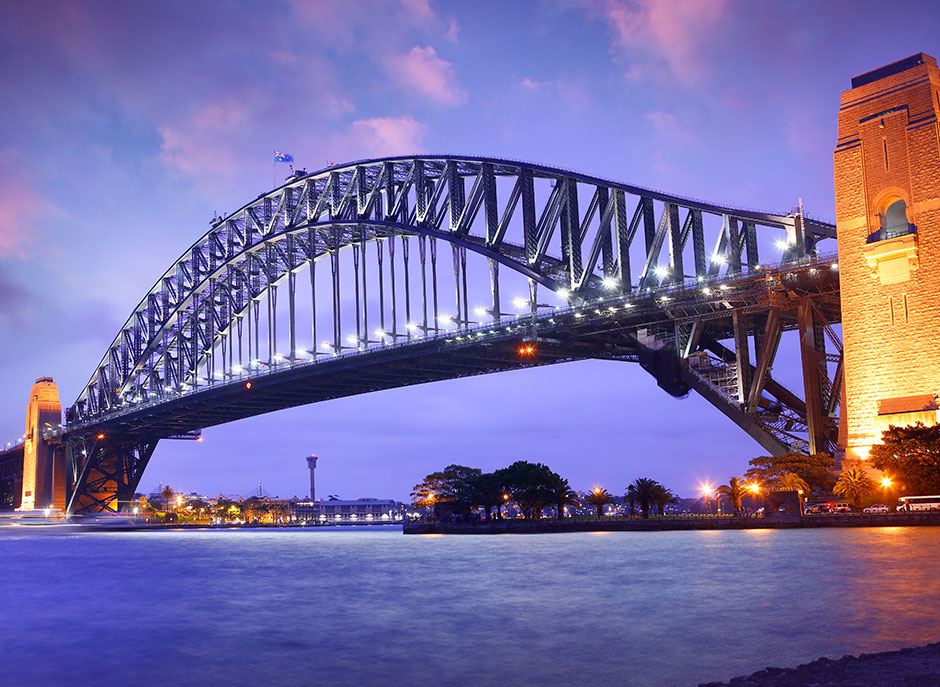 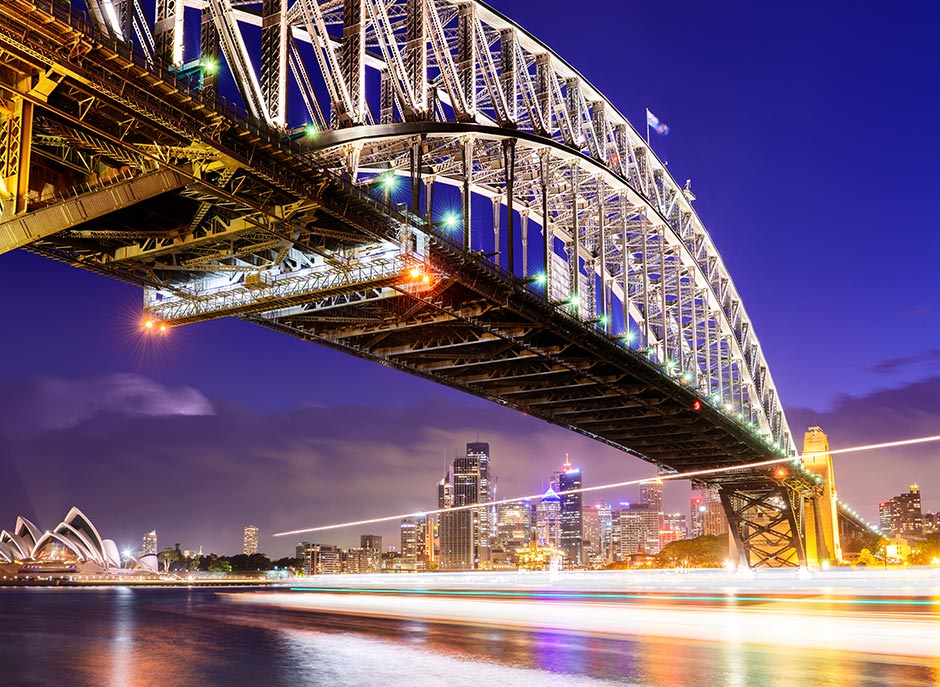 Beam bridges date even further back than arch bridges. The easiest way to understand how a beam bridge works is by imagining an old log propped up on big stones in a stream, creating a crossing. The modern iteration of this would be concrete columns being placed along the span of the bridge and being topped with a deck. Also known as a girder bridge, the beam bridge is considered one of the simplest types to build.

A cantilever bridge is a specific type of beam bridge that uses cantilevers – horizontal structures supported only at one end. This makes construction much easier because there’s very little falsework involved. In other words, there’s less need to build temporary structures during the overall construction process.

Cantilever bridges are especially useful when it comes to cutting across waterways, as they reduce the number of river piers that would be required otherwise. The Forth Bridge, which runs across the Forth estuary in Scotland, is an iconic cantilever structure that was designated a World Heritage site in 2015. 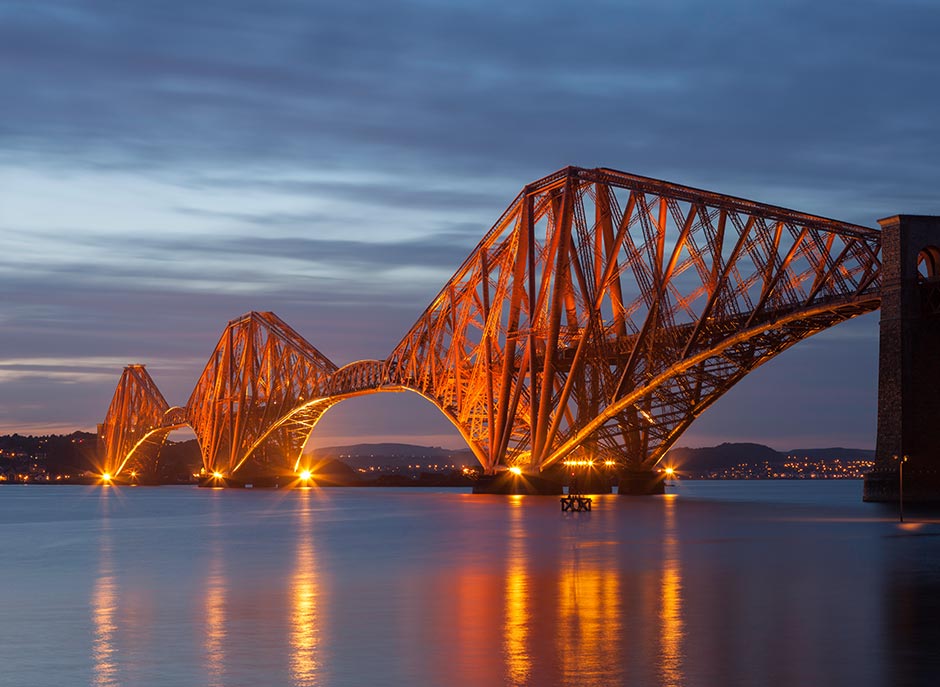 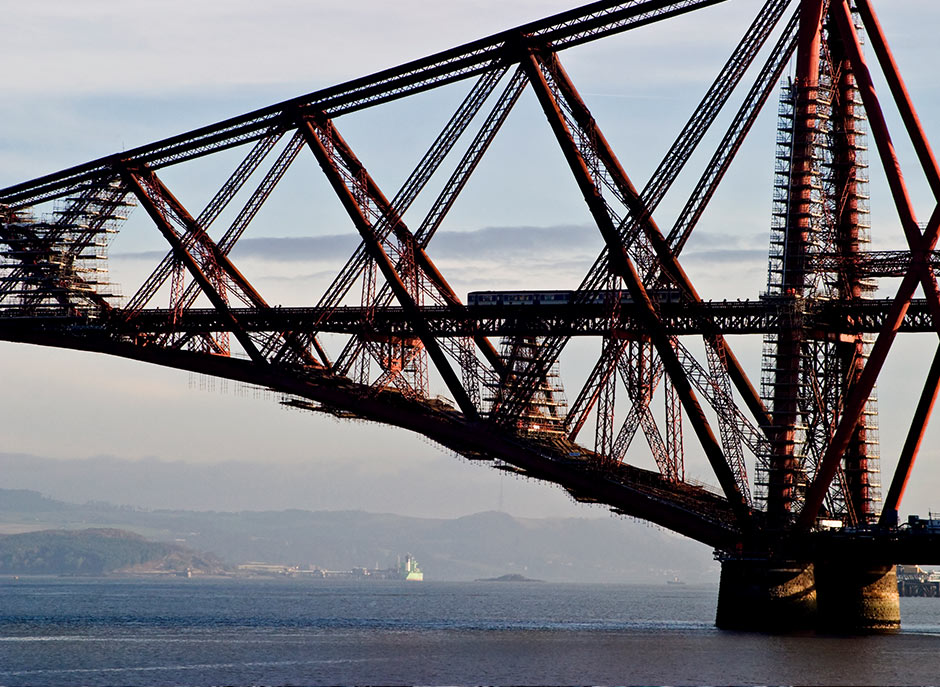 Easily covering a span of up to 2,100 meters, suspension bridges are good for covering long stretches. They are also some of the easiest to understand when it comes to load bearing principles. Just like a swing seat is suspended from ropes and the load is distributed downward into the ground by the frame, the deck of a suspension bridge hangs from cables, and the tension is distributed to towers and anchorages on both ends.

Although there are various ways to construct a suspension bridge, Samsung C&T Engineering and Construction Group built the world’s first-ever self-anchored suspension bridge with three-dimensional cables. Located in Korea, Yeongjong Bridge was completed in 2000 and spans over 2 kilometers with an upper and lower deck. 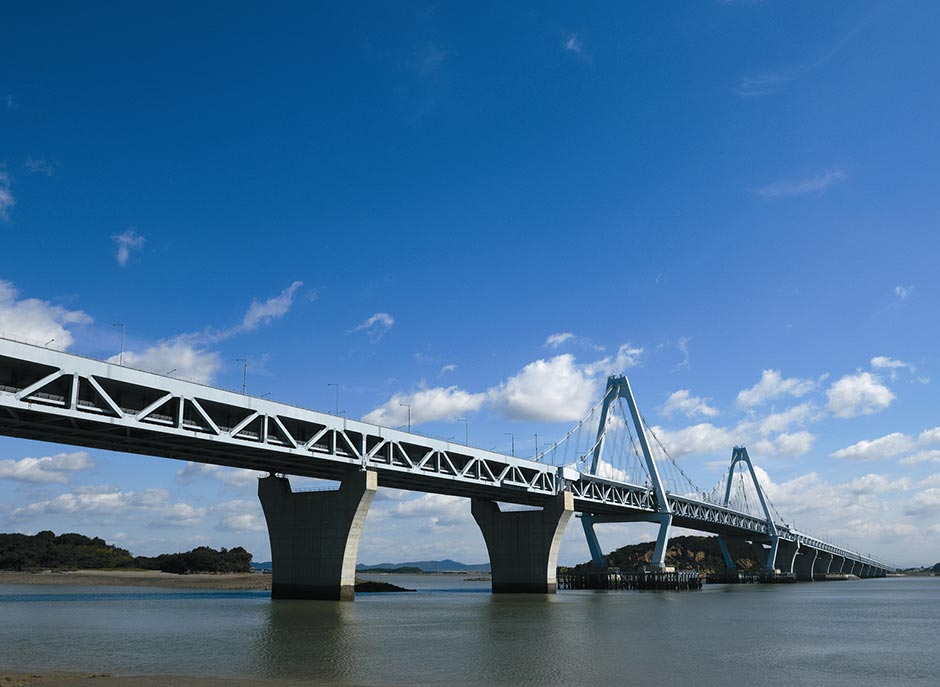 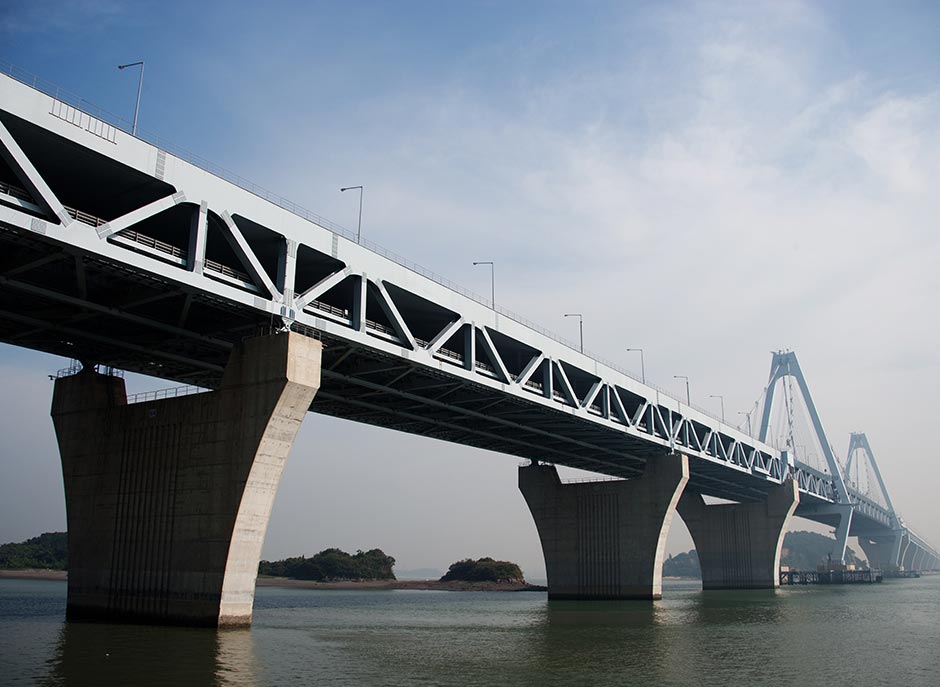 With their elegant triangular peaks, Incheon Bridge in Korea and Mersey Gateway in the UK — both built by Samsung C&T E&C — are perfect examples of cable-stayed bridges. The former boasts the world’s fifth-longest span of 800 meters between the main towers, while the latter has a six-lane structure and has provided a new option for crossing the River Mersey for the first time in 56 years. 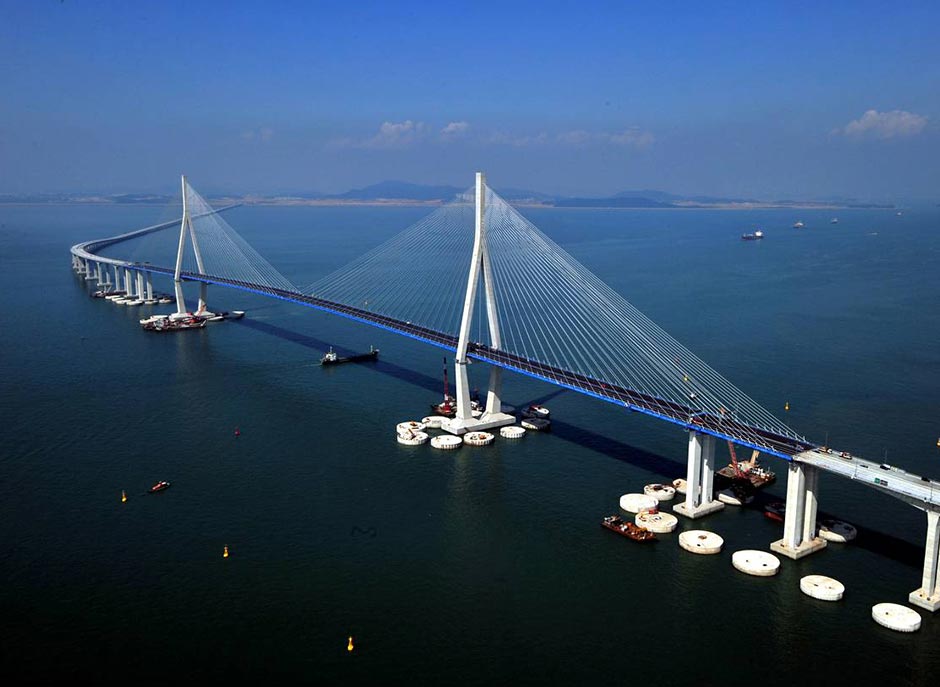 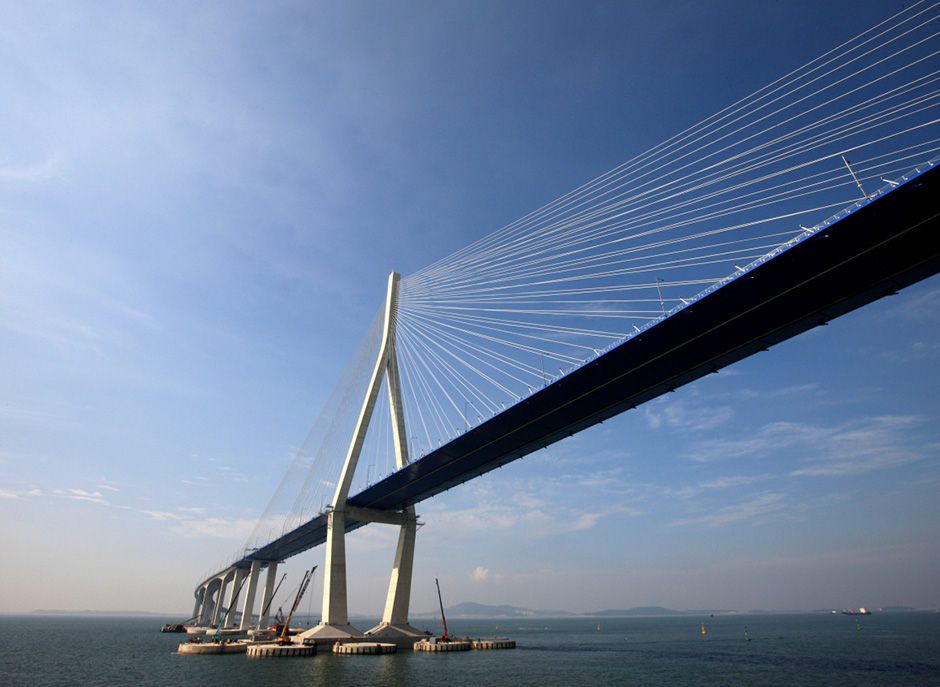 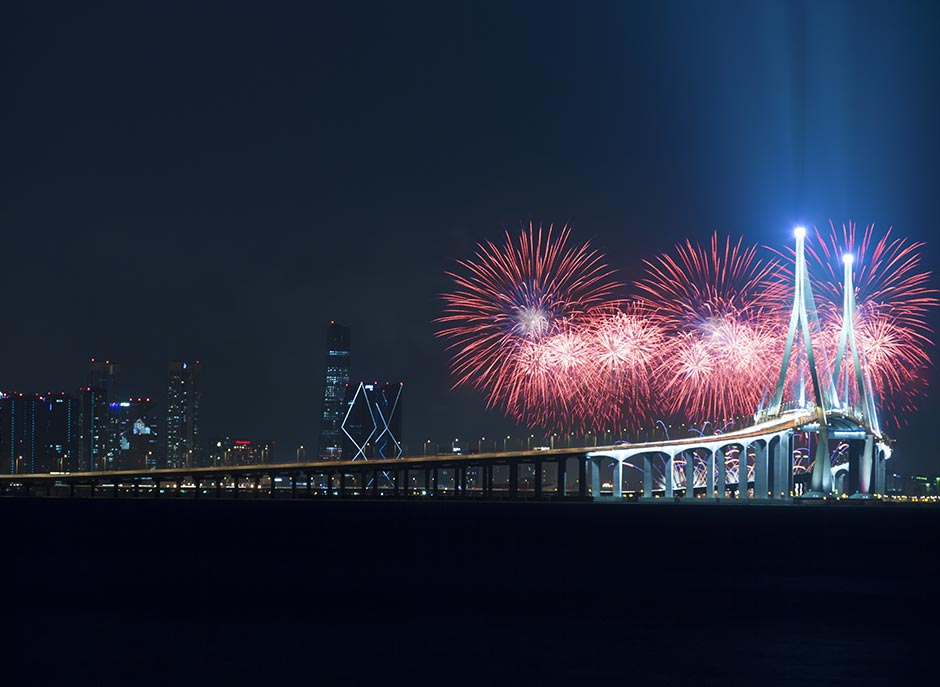 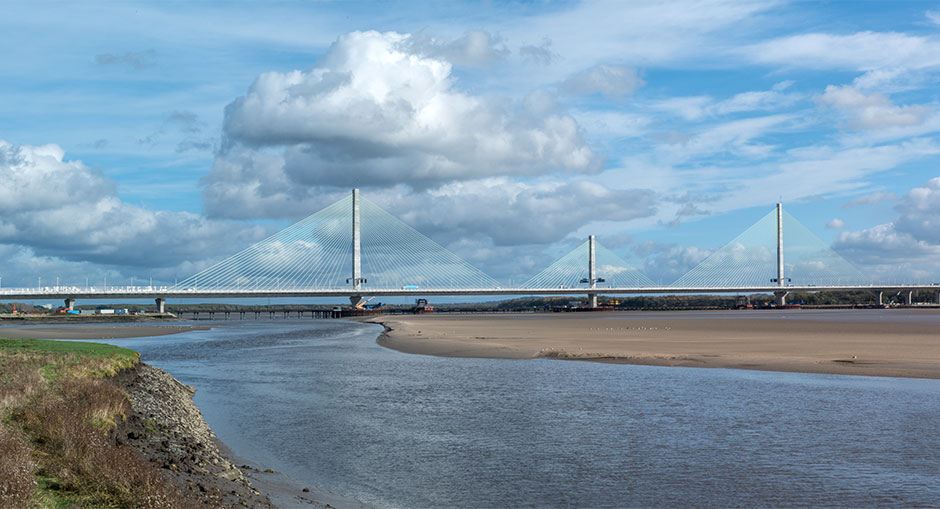 Photo #4 Source: Catalyst Centre-3 by Gerald Murphy is licensed under CC by 2.0

The design of a single bridge is determined by many different moving parts, which include but are not limited to structural integrity, the project budget, location, timeline, and aesthetics. With this in mind, next time you stumble across a different bridge, consider the various weight-bearing principles illustrated above and try to guess what type of structure you’re setting foot on.

Capturing the Moment: The Beauty and People Behind Samsung’s Construction Projects in Photos

Indispensable Materials Series Part 10: How Silver is Powering Our Lives