Ties between Samsung C&T and Myanmar go back a long way. Almost four full decades ago, the company opened an office in Yangon. However, a long period of political instability curtailed activities in the Southeast Asian country for most foreign enterprises – including Samsung C&T – until earlier this decade.

In 2012, military rule slowly came to an end, and economic sanctions on the country were lifted. Since then, Samsung C&T has stepped up its commercial operations in Myanmar – but is also looking at ways to contribute to disadvantaged youth groups in the country through extensive volunteer projects.

One such effort took place in early August this year when a team of Korea-based employees – who voluntarily surrendered their vacations for the chance to participate in a four-day program – headed out to Thingangyun, a township on the eastern fringes of Yangon.

The group’s mission was to lend a hand at Yatanabon Yeiknyein, an orphanage and school for young boys in the district, and home to 130 boys between the ages of five and 16. They were tasked with improving the facilities and providing resources, as well as helping educate the children.

The Venerable Sandasiri, principal of the school, explains that Yatanabon Yeiknyein is funded almost entirely by donations, which are often barely enough to make ends meet, and leaves precious little funding for the upkeep or renewal of facilities.

Ven. Sandasiri says, “Most of the donations we receive goes toward meal expenses. We get through about 100kg of rice a day, so we cannot afford to serve the children much else.”

The volunteers prepared for their trip by specially designing and hand-making eco bags and handkerchiefs to give to the children as gifts. They also brought art supplies with them for use in the boys’ craft programs, and ordered heavy-duty supplies, such as air conditioner units, fans and even washing machines, to donate to the school.

One of the most ambitious projects the group undertook was the renovation of the school’s playground. When the volunteers arrived, they were surprised to see a backyard full of garbage. They quickly got to work, clearing away the mess and lining it with sand and then a layer of pebbles, before setting up slides and other playground items. 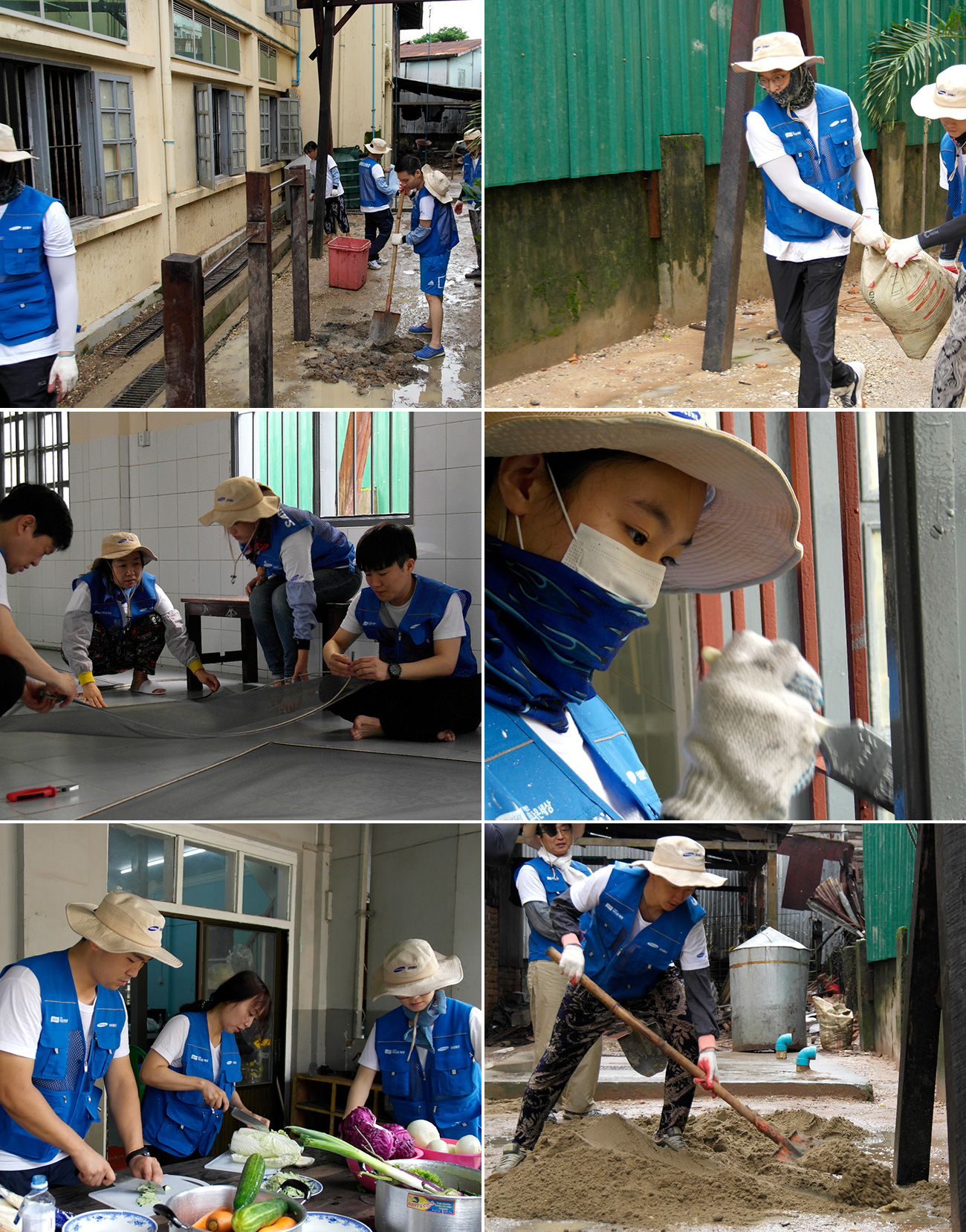 It was hard work in the humid, hot Yangon sun, but the volunteers explained that motivation was at hand – the sight of the children gathering to watch the space turn from a trash heap to an adventure playground provided plenty of inspiration.

Seung Tae Kim, a general manager at Samsung C&T’s Industrial Materials Team and one of the program volunteers explains, “Although the work was tough, I couldn’t really notice that. The children were smiling with anticipation throughout, and I was just so happy to see the joy it was bringing them.”

The group also gave the inside of the building a revamp, with repairs to walls and the ceiling. They also installed window screens inside the students’ main living area, and built lockers for the boys.

Although the building and interior work was a big part of the volunteers’ remit for the four-day program, there was also plenty of time for interaction with the children.

Classroom resources are usually scarce at Yatanabon Yeiknyein, but after completing work on the playground and the building, the team turned its attention to education and games.

The group had brought kits for solar-powered cars and balloon helicopters for the children to build together. To the volunteers’ cheer, the children were delighted to assemble these innovative toys. 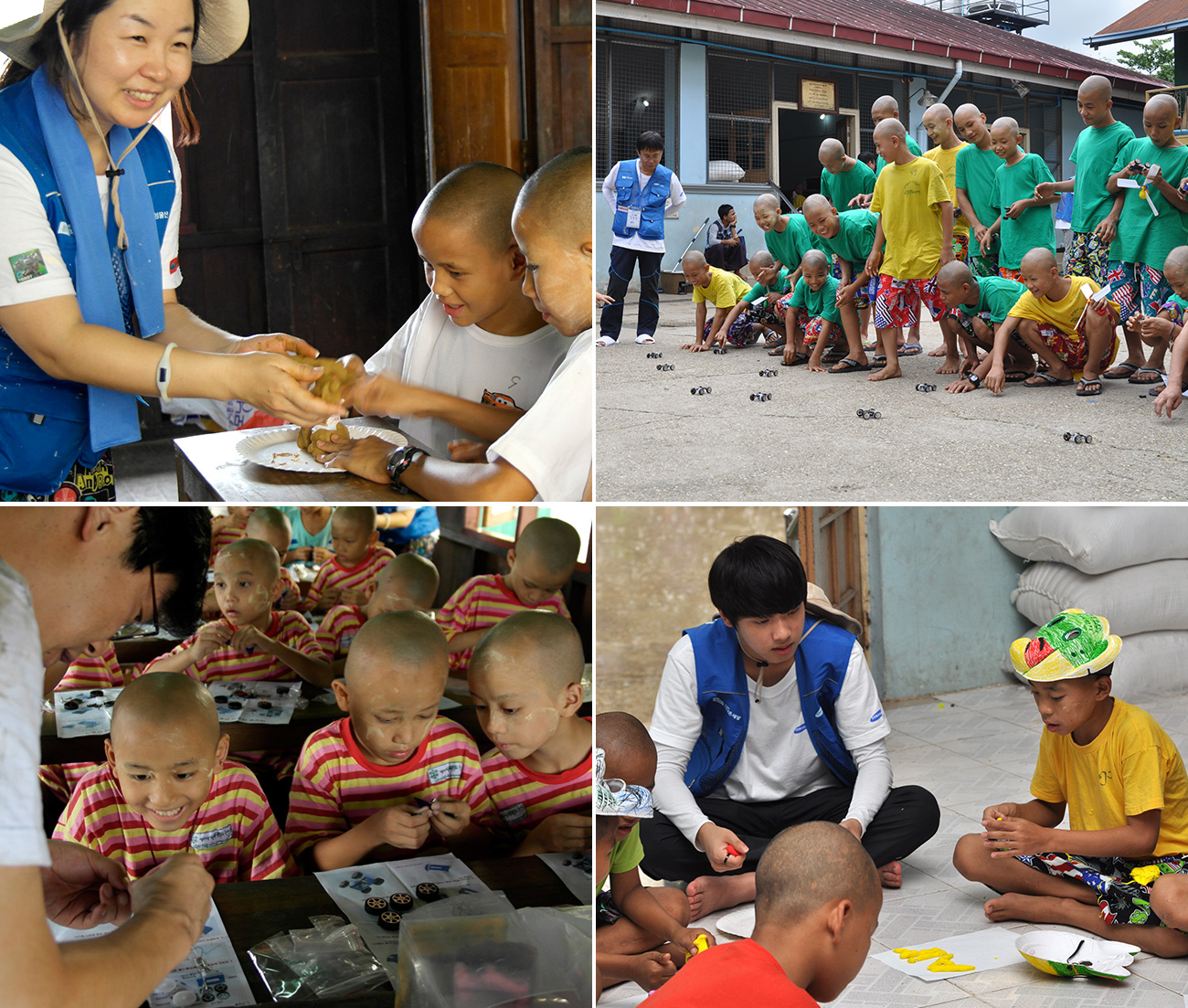 Seung Hwan Cho, a general manager at Samsung C&T’s Living Industrial Team, explains, “I was first worried that making miniature cars and helicopters would be a bit challenging for these young children, but I was pleasantly surprised as the kids were very bright and enthusiastic.”

There were also home economics lessons in store for the children. Senior Associate Jin Wook Park of Samsung C&T’s Project Division, a dab hand in the kitchen in his free time, was there to teach the children about hotteok, a sweet pancake treat popular among young Koreans.

Jin Wook Park notes, “I felt a lot of positive energy when we were able to share the hotteok with the children. They loved it!”

After the fourth day, it was time for the volunteers to bid a heavy-hearted farewell to the orphans and their teachers.

Yoon Jung Park, a senior associate at the Steel Division was moved to tears by the experience, and explains, “I feel like I have become very close to these children, despite the fact that I only spent a relatively short time with them. It was really sad to say goodbye so soon.”

The good news for people like Yoon Jung Park, and others who felt a sense of fulfillment through the project, is that this year’s effort was merely the beginning. Moving forward, Samsung C&T plans to carry out a wide range of volunteer schemes in Myanmar every summer.

The project is just the latest development in a wide-ranging outreach program Samsung C&T has been operating across Asia. The company has successfully operated volunteer programs in India over a five year period, helping a broad selection of disadvantaged children and families.

Senior Vice President Yong Soo Kim, the regional director for Southeast Asia & Oceania notes, “I hope our recent volunteer effort helps build bridges that connect the students in Myanmar with the wider world. It was also a valuable opportunity for company employees, and helps us expand our horizons.”

A new dawn is breaking in Myanmar, and through corporate and voluntary activities, Samsung C&T is playing its part in helping disadvantaged youths find hope in the country.

Understanding the True Value of Safety in Construction