for Outstanding Contribution in 2018

As Samsung C&T grows as a truly global company that strives to exhibit the very highest standards of business practice, it envisages success as not only measured in business performance metrics, but also in the number of people it can reach within its regional communities.

The Trading Group was therefore honored to have ended 2018 with two awards that reflect this duality and also recognize the hard work put in by its employees day after day – one from the Korean government for the Group’s contribution to international trade and another from the City of Shanghai for the office’s community endeavors.

On December 5th of last year, the 55th annual Trade Day event was held at the COEX Center in Samseong-dong, Seoul. Over 2,000 government and trade officials were present to honor 2018’s award recipients at the event which was established to promote the balanced development of trade and recognize the continued efforts that industry leaders have been making to further the nation’s trade goals.

This year, there was much to celebrate, as 2018 saw Korea surpass $600 billion in exports for the first time, garnering a trade forecast of $1.1 trillion. In the face of challenging trade conditions, Korea has become the world’s sixth largest export powerhouse, and to commemorate the occasion, 600 workers were recognized for their work in expanding the overseas market. Furthermore, 1,264 companies received the ‘Export Tower Award’ and 77 outstanding individuals were awarded the prestigious President’s Commendation. One of those recipients was C&T Trading’s very own General Manager, Hun-bae Park.

2018 saw the C&T Trading Group achieve $150 million in exports of fertilizer products, a leading example of best practice in overseas trade. This achievement was thanks in no small part to Park and his 26 years of experience and service in fertilizer trading. This award recognizes that his dedication and strong performance has secured the foundation of stable growth for the Trading Group, as well as enhanced the export competitiveness of the Korean fertilizer market; the campaigns he has run for domestic fertilizer products have opened up the doors to exporting in various new regions, such as Thailand, Vietnam, Turkey and Mexico.

Park noted that it was the legacy achieved by his predecessors at C&T that has paved the way for such success. “Fertilizer was first exported in the late 1970s and has significantly contributed to C&T’s export record and Korea’s trade performance. Now, we are exporting more products than ever before. I think the reason behind this is the hard work of those who came before us in putting their heart and soul into building good supply and demand line relationships. I, too, look to work for the younger generation so that they might then reap the benefits of our labor.”

Park (center) with his C&T colleagues

In Praise of Philanthropy

On December 13th, the city of Shanghai recognized Samsung C&T as one of ten companies who have contributed most consistently and most meaningfully to society over the past year. Other recipients of this awarded include Haier, the Agricultural Bank of China and the Shanghai International Convention Center. 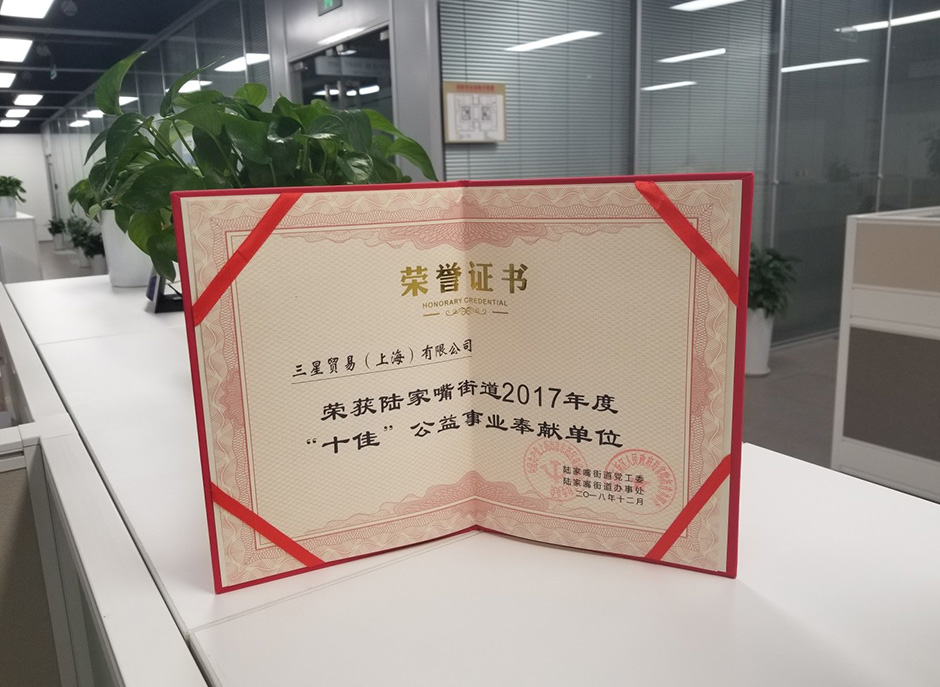 C&T Shanghai’s CSR award certificate, which details the office as one of the ‘Top 10 Social Contribution Companies for Public Interest in the Lujiazui [Shanghai] District in 2017’

The ‘Regional Top 10 Superior Companies in Social Contribution’ honor was awarded to C&T on the basis of the past two years of charitable enterprises all employees and executives of the Shanghai office have been doing together to become a company that truly gives back and takes one step closer to the local community. The company has been working in partnership with the local Lujiazui Volunteer Work Group across various philanthropic fields such as cleaning up local areas, helping disadvantaged families and caring for those with disabilities.

Senior Manager Xiying Yin recapitulated the office’s pledge to keep engaging with the local community. “C&T Shanghai is committed to being a company that contributes to Chinese society through our volunteer work. We will continue to provide continuous service so that we can give back to society in a way that feels truly rewarding.”

In July 2018, C&T volunteers took to the streets of Shanghai’s financial district to clean up the local area [left], and in August 2018, they handed out cold drinks to local community workers to help mitigate the dangers of working outdoors in extreme temperatures [right]

Samsung C&T is proud to say that 2018 ended on a warm and heartfelt note for the company the world over, and in 2019, the Group will continue to work hard to champion best practice in all of its endeavors.