Football Stadiums around the World

As the late German filmmaker Michael Glawogger has observed, if a universal language exists, it would probably be made up of footballers’ names. Since the rules of the game were first drawn up at Cambridge University in 1848, football has spread to all corners of the globe. Actions on the pitch can often incite a level of passion many have described as religious.

If the fans are its followers, then stadiums are the cathedrals of the Beautiful Game. While star players often dominate headlines with their skills and wonder goals, it’s the stadiums that bring fans and players together to give the game its cultural meaning and history. With exteriors and stories as diverse as the tactics deployed on the field, football stadiums are a sight to behold, even for the neutrals.

In just over a month, players from Russia and Saudi Arabia will line up against each other in the first match of the 2018 World Cup. As we near the end of the four-year wait, here are 5 most historical and spectacular stadiums around the world.

Football fans often like to think of their team’s home ground as a fortress capable of resisting even the most ferocious opponents. For fans of Croatia’s HNK Trogir, they can unabashedly make that claim literally. Their home ground, Igralište Batarija, is located in between not one but two 15th-century fortresses. 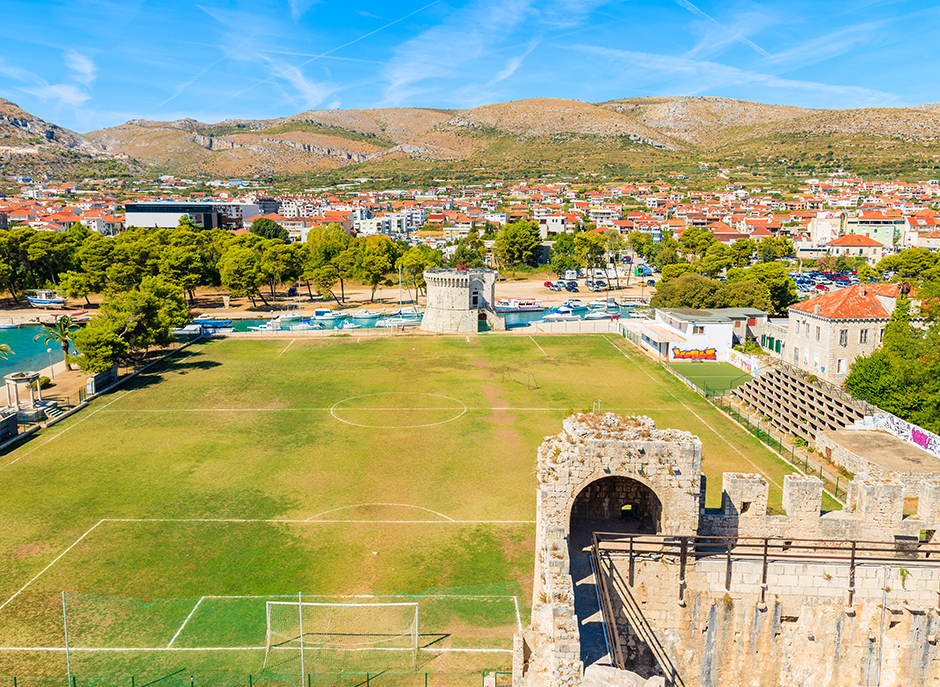 On one end of the 1,000-seat stadium is Kamerlengo Castle, while the Tower of St. Marco, a Renaissance-style fortress, sits on the other end of the pitch. The historic buildings not only provide an impressive backdrop to the stadium, they also serve as perhaps the most unique football terraces, as spectators can watch HNK Trogir’s home games from the top of the monuments.

2. The Float at Marina Bay, Singapore

Unless you somehow cross paths with an ardent Singaporean Sunday League fan, it’s unlikely that you’ll find many people who’ve watched a game of football at the Float in Singapore. But what this stadium lacks in big game actions, it more than makes up for in its design. 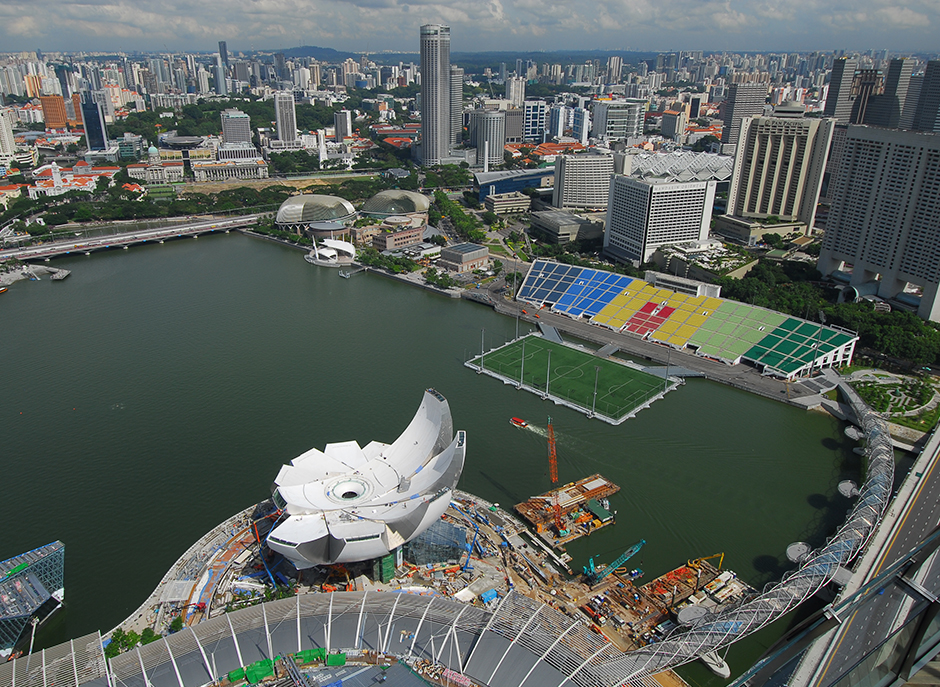 Opened in 2007, the stadium is essentially a floating steel platform with a capacity of 30,000. Comprised of 15 pontoons that fit together like jigsaw puzzles, the pitch is held in place by 6 pylons that reach the seabed and 3 linkways that connect the structure to land.

While not many football games have been played at the Float, the stadium has hosted many large events, including Singapore’s National Day Parade as well as the Singapore Grand Prix. 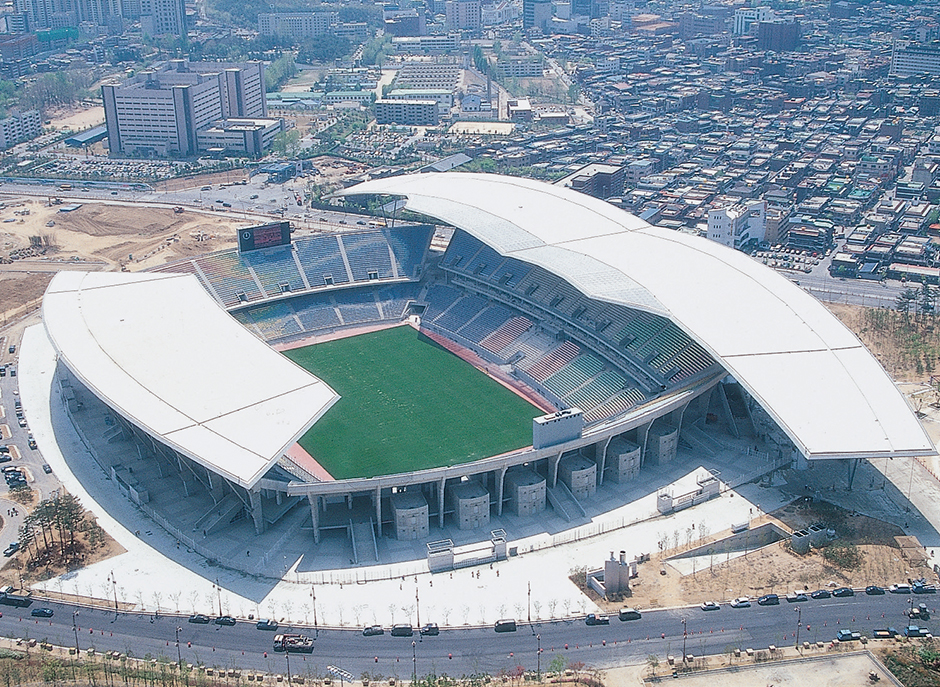 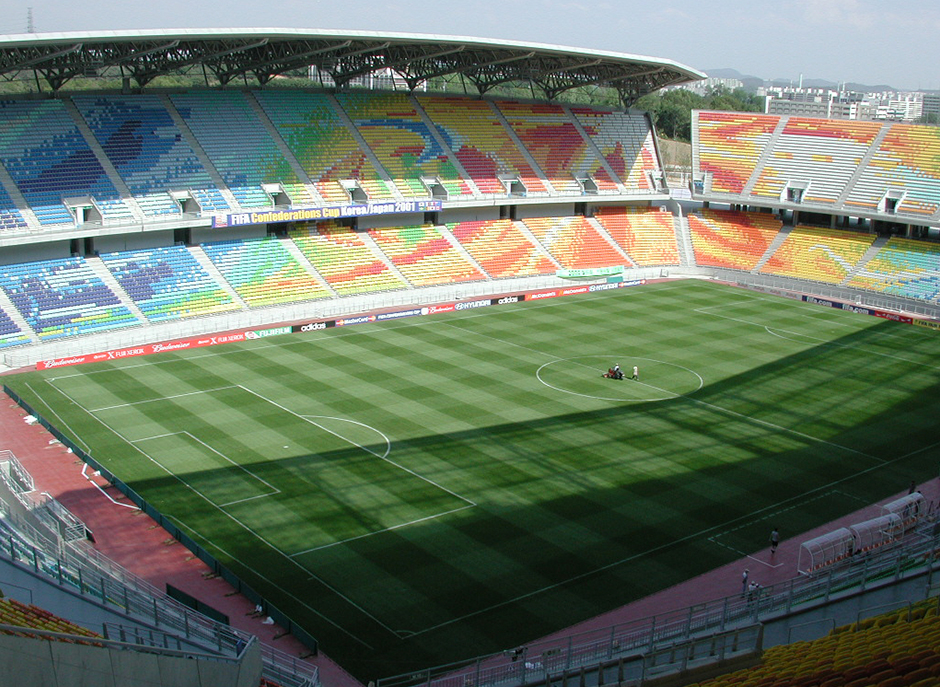 The 2002 World Cup co-hosted by Korea and Japan is inscribed in the history books for many reasons, not least because it was the first time East Asia played host to the tournament. Located a few kilometers east of the Hwaseong Fortress, the Samsung C&T-built Suwon World Cup Stadium was one of 10 grounds in Korea for the tournament.

Known affectionately as Big Bird Stadium due to its distinctive wing-like exterior, the 43,959-seat stadium is now home to Suwon Samsung Bluewings F.C. – one of Asia’s most decorated football teams. The club’s fans, Frente Tricolor,  is well-known for staging elaborate displays during home games, making the stadium one of the best grounds in Asia to watch football.

Estadio Centenario in Uruguay may not have the amenities and elegance of modern stadiums, but the concrete colossus holds a special place in football history. 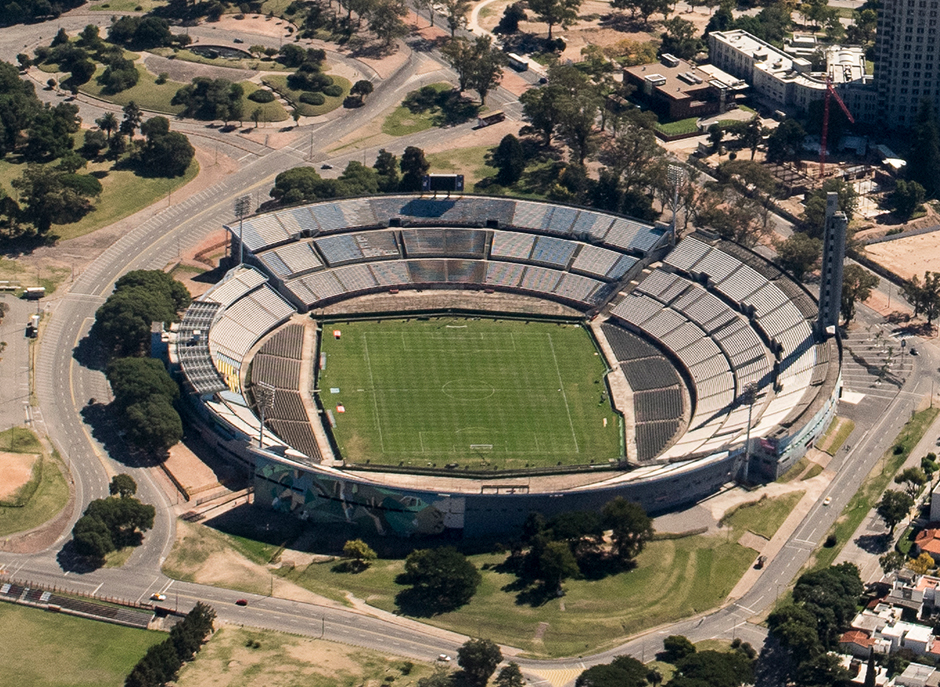 Built between 1929 and 1930, Estadio Centenario was the main venue for the inaugural World Cup, hosting each of the 13 nations which took part in the tournament at least once. Designed by architect Juan Antonio Scasso, the 100,000-seat stadium was declared by FIFA, the international governing body of association football, as a historical monument of World Football in 1983.

The historic stadium continues to be the home of the Uruguay national team to this day, and many top teams have succumbed to the Charruas under the imposing shadow of Estadio Centenario.

Home of FC Barcelona, one of the world’s most renowned football clubs, Camp Nou is the largest stadium in Europe. With a seating capacity of 99,354, the size of the Catalonian stadium is matched by the stature of the players from the past and present who have unleashed their magic at the ground, including the late Johan Cruyff and Lionel Messi. 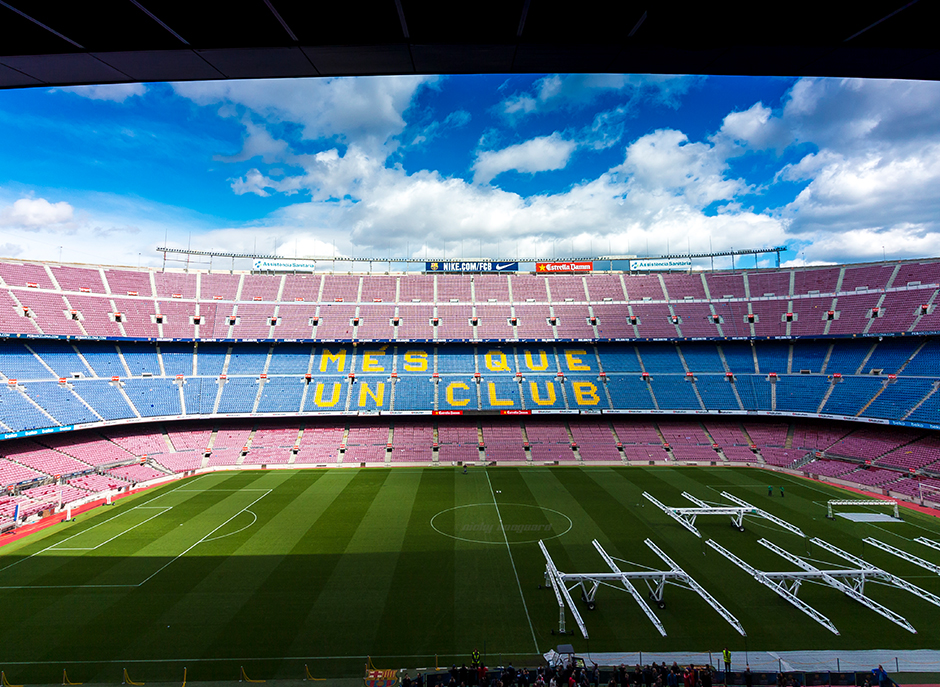 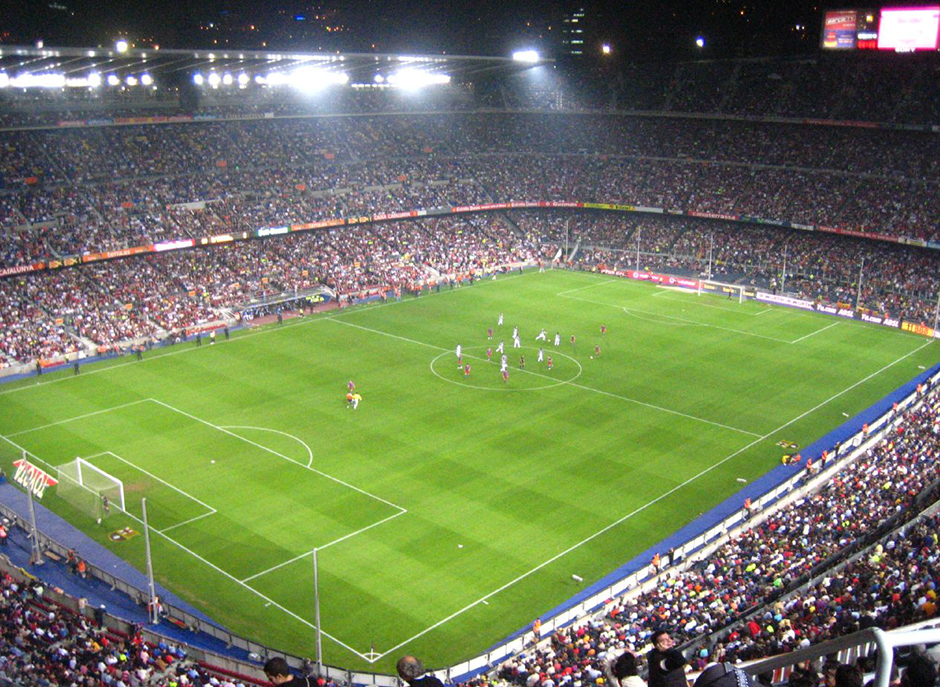 Photo 1 ‘Camp Nous overview’ by NickyBoogaard is licensed under CC BY 2.0

Photo 2 ‘Camp stadium’ by adriagarcia is licensed under CC BY 2.0

Completed in 1957, Camp Nou is due to undergo a major renovation, with completion scheduled for the 2022-23 season. Just as Barcelona teams through the ages have pushed the envelope of football tactics on the field, architects behind the major renovation project are also using the latest construction technologies, including BIM, to renew the ground.

Flower Power: How Floral Prints Can Freshen Your Spring Wardrobe