The materials that make batteries

2021 is shaping up to be a big year for the electric vehicle (EV) market, with related companies enjoying a boost already as EVs progressively move towards mainstream status. From Norway to South Korea, EVs are becoming an increasingly important part of the public and private transport discussion.

The most important factor that distinguishes an EV from a conventional vehicle is the battery that powers it. This feature will look more closely at the materials used in EV batteries and how Samsung C&T Trading & Investment Group is involved in trading them.

Rise of EVs and the force behind them

It might seem as if EVs have enjoyed a rapid climb from being an obscure concept, but actually they were first introduced more than a century ago. By 1900, EVs accounted for a significant share of all vehicles on the road, and New York City even had its own fleet of electric taxis.

Gasoline and diesel vehicles quickly took over in the 20th century, gaining popularity over EVs for the same reason some consumers might still drive them today – they became cheaper than EVs and benefited from a supportive infrastructure. However, EVs were bound to fight back eventually given that gasoline and diesel vehicles rely on fossil fuels and pollute the environment.

So, let’s take a closer look at the power that drives an EV. Obviously, they rely on a charging infrastructure, but lithium-ion batteries are currently the dominant technology that makes EVs work in the first place. Lithium-ion batteries generate power through the movement of lithium ions and electrons. When the battery is charged, the ions and electrons move from a cathode to an anode through an electrolyte and wire, respectively. Conversely, when the battery is discharged, they go back to the cathode the same way, which allows the EV to move. You can check out the typical makeup of an EV battery below. 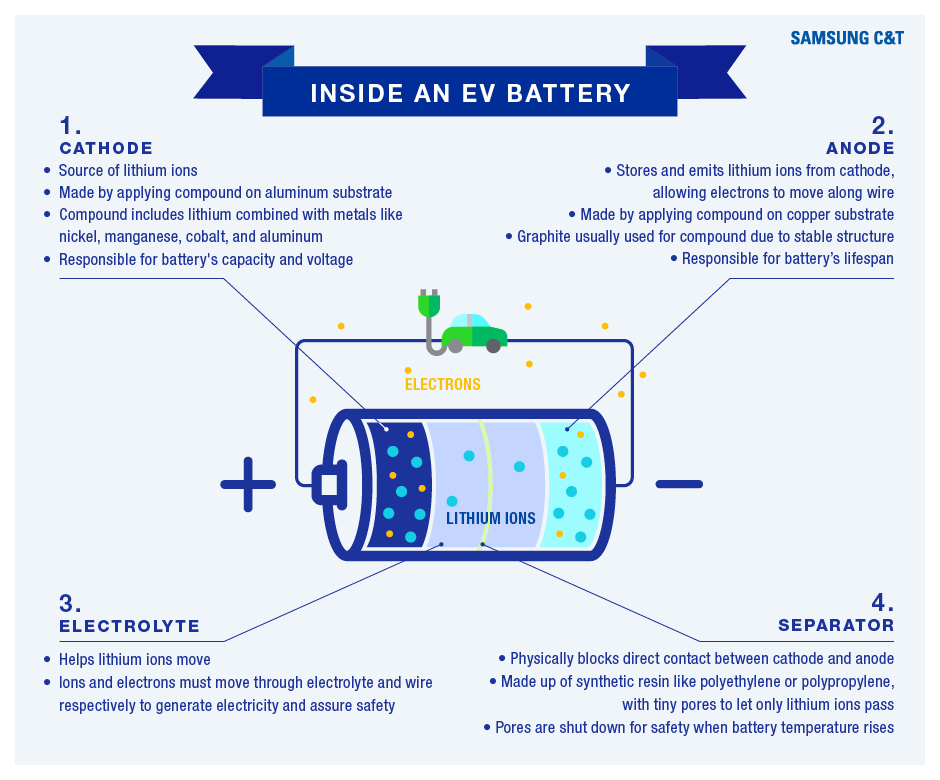 Behind the global EV boom: The battery and raw materials market

The EV battery market is projected to reach USD 133.46 billion by 2027, growing at a CAGR of 18.05%. Lithium-ion batteries account for around 70 percent of the rechargeable battery market.

Companies have been continuously investing in ways to lower the cost of producing EV batteries. As a result, lithium-ion battery prices have dropped 87 percent between 2010 and 2019, and they are expected to keep falling thanks to new breakthroughs in chemistry and manufacturing techniques.

Underlying material prices can also play a significant role in the future of powering EVs. Lithium-ion batteries rely on a ready supply of key metals, and the markets for these materials are benefiting from the overall boost being enjoyed by the EV industry. For instance, the lithium market is steadying after a three-year downturn, and even the recent move by the Chinese government to reduce subsidies for EVs has not hit the market for EV battery materials as it did in 2018. Moreover, global demand for nickel used in EV batteries is set to increase over 10 times from 60,000 metric tons in 2018 to 665,000 tons by 2025. And as EVs require up to 3.5 times more copper than internal combustion engine (ICE) cars, demand for copper to supply EVs is projected to take over that of ICE vehicles in 10 years.

For example, the company trades rare metals such as nickel and cobalt. Samsung C&T is leveraging its sourcing network while seeking to develop new suppliers to meet rapidly growing demand for rechargeable battery materials, including cobalt and nickel as well as lithium.

In addition, Samsung C&T supplies copper concentrates. Copper concentrates are an unfinished form of copper found in the step before it is processed, and processed copper has several uses including for EV batteries.

While EVs continue to drive themselves and various materials towards new heights, there is also another important aspect to ensuring the industry’s sustainability – recycling used EV batteries. Part 2 will look more closely at this, as well as finding out about Samsung C&T’s participation.

The Persona of Juun.J unveiled at Paris Fashion Week