The start of a new decade has got many of us resolving to become fitter, healthier, and happier. But what about our planet? As the United Nations Climate Change Conference COP 25 showed last month, much needs to be done to get global warming under control.

If we are to limit greenhouse gas emissions to the level targeted by the UN Environment Programme (UNEP), it will be important to use eco-friendly energy sources like the sun, wind, and water. The International Renewable Energy Agency (IRENA) says the world needs to more than double its current plans for renewable energy capacity by 2030 in order to meet the UNEP’s goal.

So, let’s find out more about how renewable energy can help.

How does renewable energy work?

There are six types of renewable energy highlighted on IRENA’s website: solar, wind, ocean, hydropower, bioenergy, and geothermal. What these energy sources all have in common is that they are natural in origin.

For example, it is well known that the sun emits powerful rays. These can be caught by solar panels or concentrated via mirrors to create electricity. Another force of nature, wind, can move the blades of turbines to generate power, while renewable technology also harnesses the energy of water in dams and reservoirs, as well as ocean waves. More earthy sources include bioenergy from trees, plants, and organic waste, along with geothermal energy using heat from deep underground. 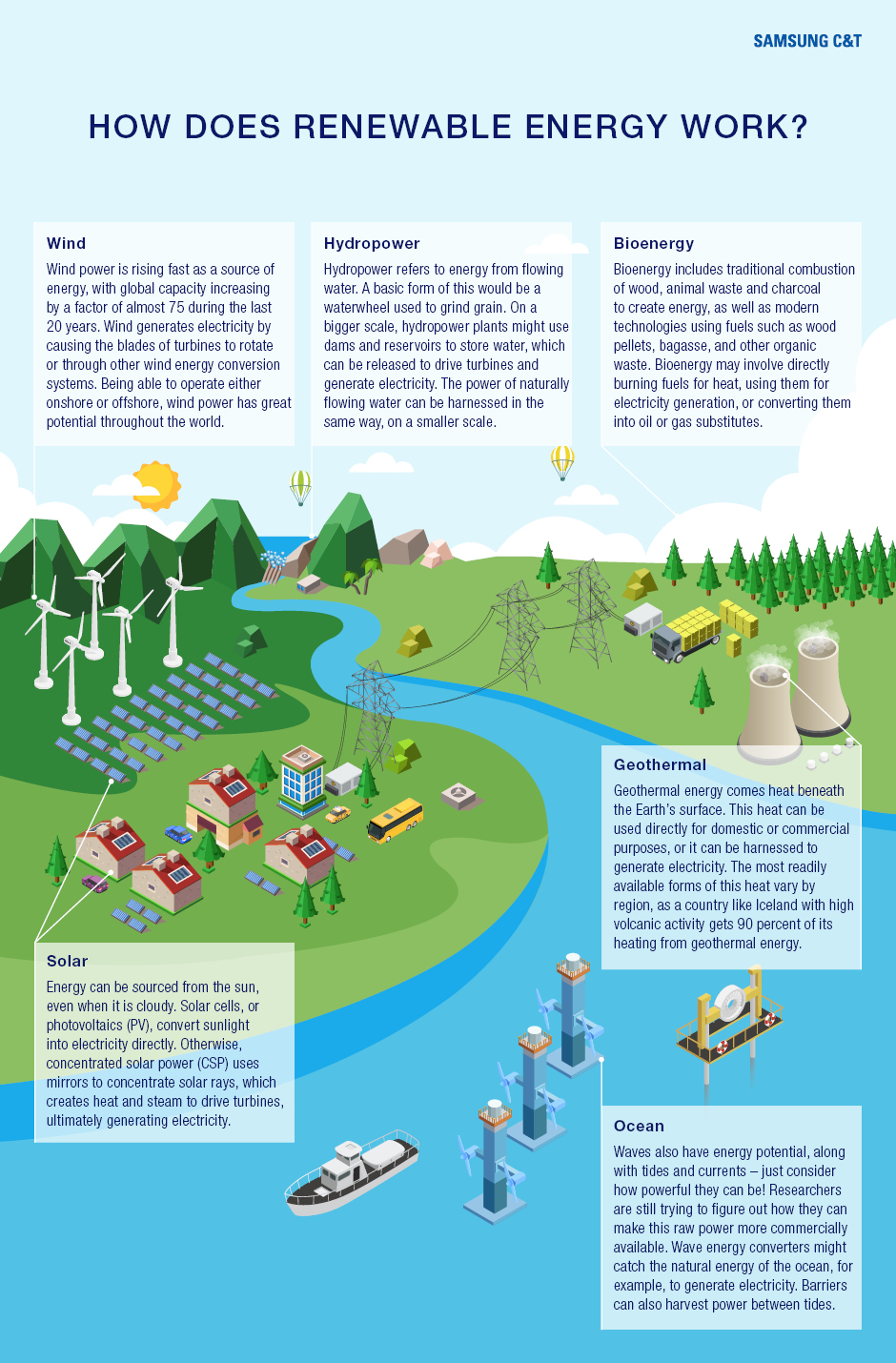 IRENA’s goal is for renewable energy to make up half of global power generation by 2050. With fossil fuels currently supplying around 80 percent, the agency insists the renewable share can exceed 30 percent by the end of this decade “at no extra cost.” In fact, it claims the energy shift would not only be cost-effective but would also bring with it considerable socio-economic benefits – boosted economic growth, more jobs, and a healthier environment.

Mark Jacobson, a professor from Stanford University, has gone even further with research colleagues. They produced this vision for getting to 100 percent by 2050, with projected benefits outweighing any disadvantages. If that sounds like a bold ambition, then the infographic below outlines IRENA’s own target for how renewable energy sources could outweigh non-renewables in order to meet the world’s key climate goals within the next 30 years. 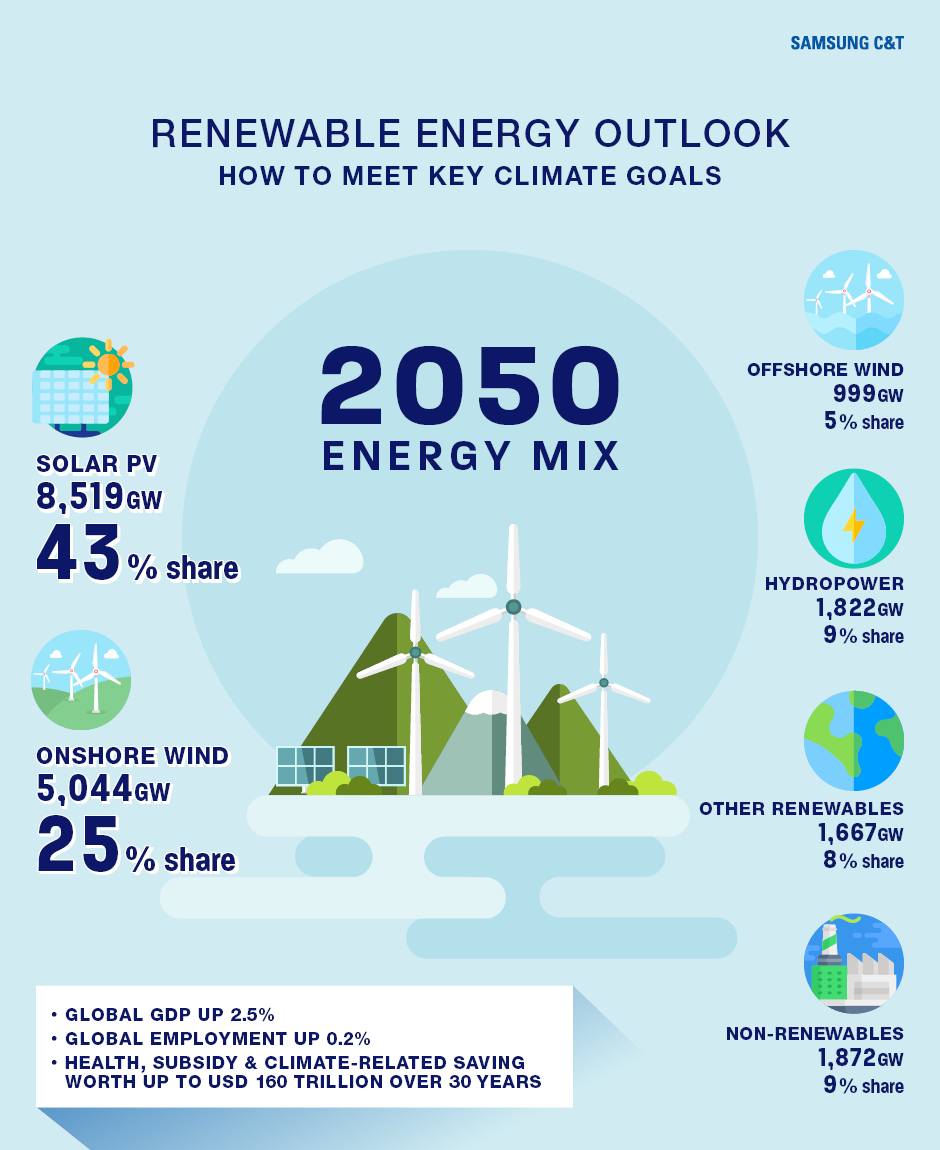 Given the benefits of renewable energy, it’s not surprising that the industry as a whole has already been growing in recent years. What’s more, it’s getting easier and more cost-effective to invest in and consume renewable energy, according to this report published online by the World Economic Forum.

Samsung C&T Trading & Investment Group has been participating in the growth of renewable energy through, for example, solar and wind energy plants in North America. In 2018, the company completed its landmark Ontario Project, including 10 power plant complexes providing a total capacity of 1,369 MW of wind and solar energy, or enough to power 400,000 households. In addition, Samsung C&T Trading & Investment Group is building several utility-scale solar power projects in the U.S. and will develop their capabilities further.

Samsung C&T is also active in the bioenergy industry, specifically the biofuel business, operating a 24,000-hectare palm plantation in Indonesia capable of producing up to 60,000 palm fruits per day. The outer part of the fruit’s seed, or palm kernel shell (PKS), is a valuable bioenergy resource. Moreover, the company is a key importer of wood pellets to South Korea, as these are also an important source of bioenergy.

With further investment and development, spurred on by the race to develop renewable energy technologies, this decade really could mark an important era in our shift towards eco-friendly power.

The fossil fuel alternative set to power Asia and beyond