Fall in love with

In the language of flowers, the link between love and roses is so entwined that it is difficult to pinpoint where it began. From William Shakespeare to Gertrude Stein, writers throughout the ages have etched renowned tributes to this famed flower of late spring.

Much earlier, between the 4th and 5th centuries BC, Greeks and Romans were known to wear rose garlands during wedding ceremonies. The red rose, in particular, was associated with Aphrodite, or Venus, the goddess of love. Yet most rose species are native to Asia, including the red rose so many people worldwide admire today.

It is with this long tradition in mind, then, that Everland – South Korea’s largest theme park – is celebrating the 35th anniversary of its own Rose Festival by exhibiting a million roses from May 17 to June 16. Operated by Samsung C&T Resort Group and located just outside Seoul in Yongin, Gyeonggi Province, the event became South Korea’s first flower festival when it was first launched in 1985. Since then, around 60 million people have visited Everland Rose Festival.

This year, the festival’s rose garden has been transformed under a “falling in love” concept.

Visitors can stroll from the entrance through five themed zones, perhaps finding inspiration in the narrative as it moves from love at first sight, to a proposal, a wedding, and then a party featuring a pure white greenhouse pavilion and plenty of photo spots along the way.

Among the million roses in bloom, Everland Rose Festival boasts around 720 different kinds of rose in a 20,000 square-meter garden – including representative species from Britain, the United States, and France, as well as 20 in-house varieties.

Henrianne de Briey, President of the World Federation of Rose Societies, visited the festival’s garden a couple of weeks before it opened, giving a lecture and expressing her thanks during a ceremony to name an Everland-developed rose, Baronne Lily, after her mother. She described it as having a “beautiful and elegant fragrance,” and she “looks forward to it being loved by Koreans.”

The allure of a unique scent

Aside from the fragrance of so many roses in one place, the festival is showing off a new scent created by Everland with cosmetics brand Amorepacific Mamonde. Derived from Everland’s own species, Tete de Belle, the scent is described as “cool and sweet” – reminiscent of its petals, which appear as if they are laughing. If weekend visitors upload photos taken in the rose garden on their Instagram, they get a free perfume sachet.

Meanwhile on Saturdays, there is a perfume workshop four times a day. Lara’s Perfume Workshop offers the chance to create one’s own rose scent with a professional perfumer. Workshop places are available free of charge on a first-come-first-served basis.

There are also some enticing performances and other features for visitors to enjoy. Spring-Up b-boy, ballet, and jumping stilt performances will be held twice a day. From May 24, Mamonde Garden gives onlookers the opportunity to experience the energy of a flower in bloom, thanks to an air dome, fluttering petals, and a large air balloon.

During Everland Rose Festival, the theme park is open daily from 10 a.m. to 10 p.m. – for more information, please click here. 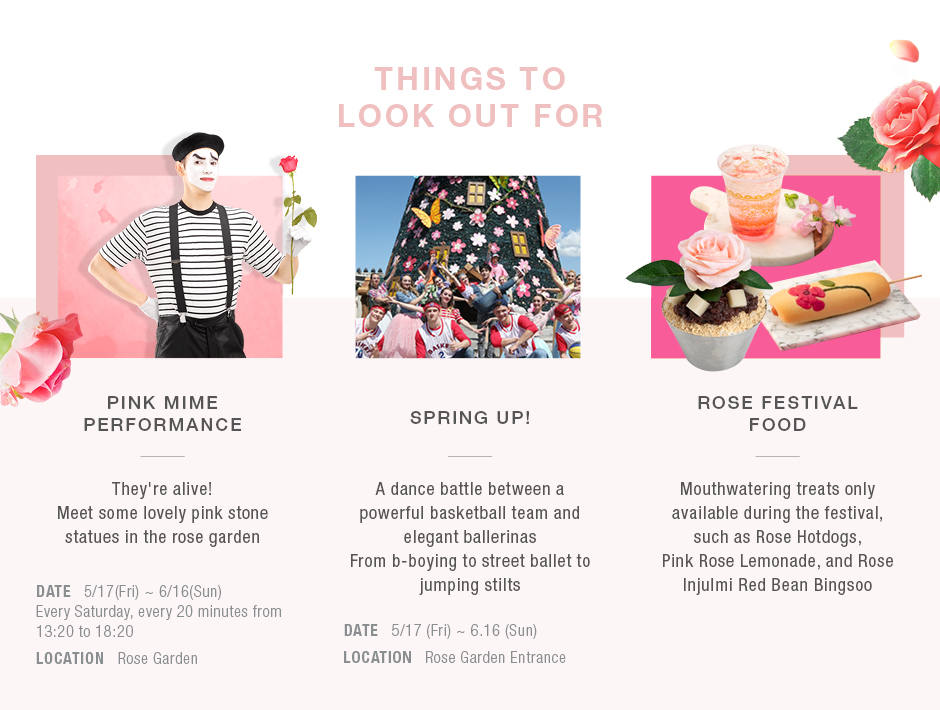 How 5G is building the future