You might not realize it with all those bustling city intersections, but Korea has some of the best cycling scenery the world has to offer. And when you decide to plan a bike trip there, you start to view the country in a different light – with its mountainous spine surrounded by serene rivers, lakes and a coastline that varies massively depending on where you are on the peninsula.

With Korea’s glorious autumn weather now upon us, here are five options for an idyllic bike trip.

This first recommendation is something of a hidden treasure, located around 100km southeast of Seoul in Chungju, North Chungcheong Province. The area is famous for its apples and hot springs, but the local government is trying to tempt more young people to visit. One of the ways it’s doing this is through cycling along Tangeum Lake.

Among the suggested bike routes is a 40 minute-course starting from the Chungju Experience Tourism Center. It then leads over a bridge, moves down a forest bicycle path to pass the rare Seven-Story Stone Pagoda dating back to the 8th century, and continues through Jungangtap Park. Visitors can also take in the spectacular scenery that surrounds the lake, including the national parks at Mount Worak and Mount Sobaek.

There’s no need to take a bike with you, as you can borrow one for free from Tangeum Lake, including tandem and kids’ options. The location was chosen by Beanpole, Samsung C&T Fashion Group’s representative brand, for its second Bike We Like campaign. On Aug. 29, the company announced it had donated 36 bikes and sheds to the area, drawing inspiration from Beanpole’s trademark bicycle logo and its sustainability philosophy – all the donated bikes are upcycled from abandoned bikes left in city centers. 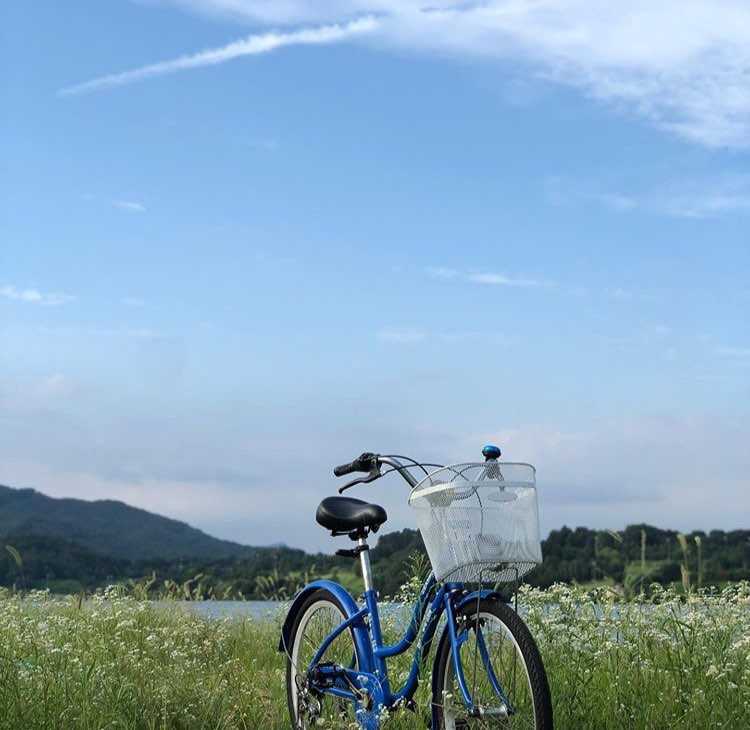 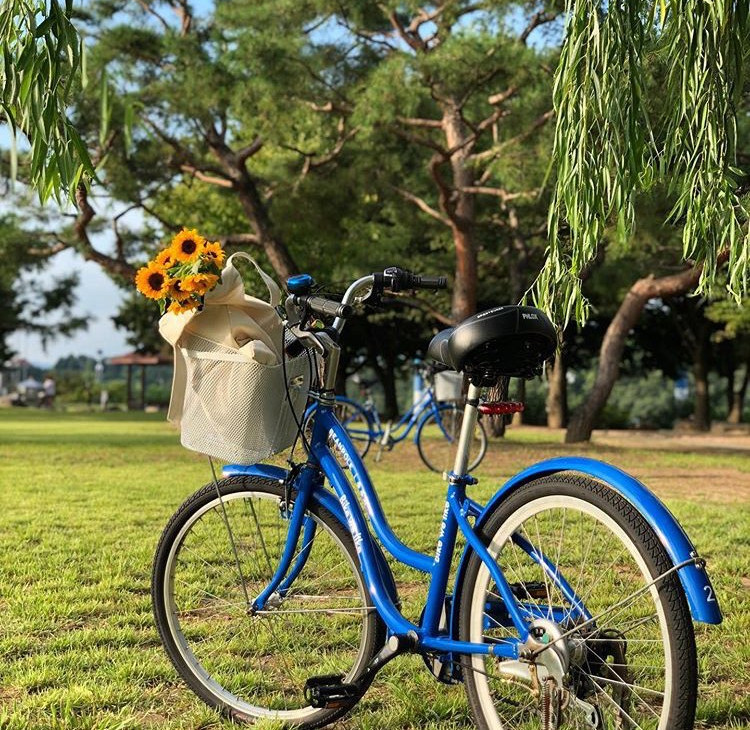 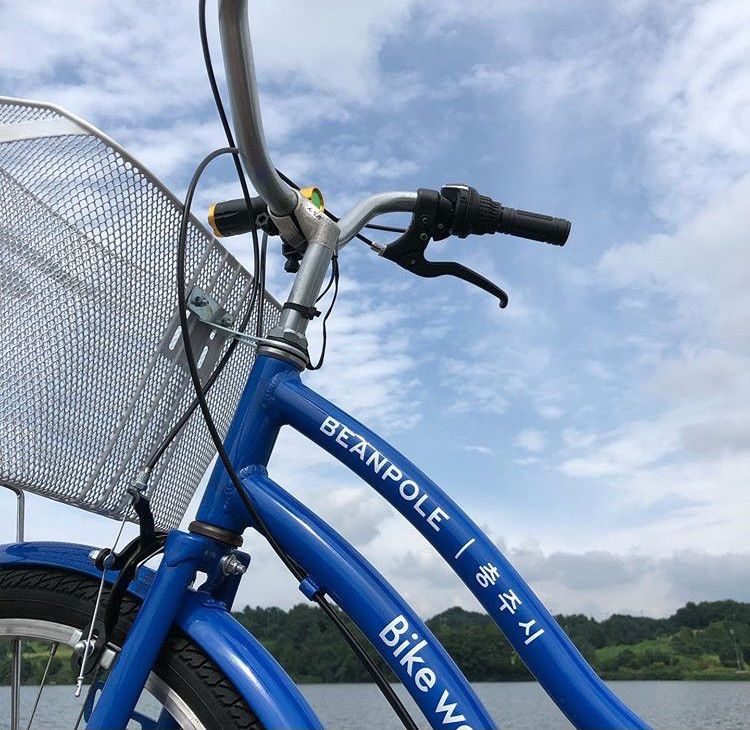 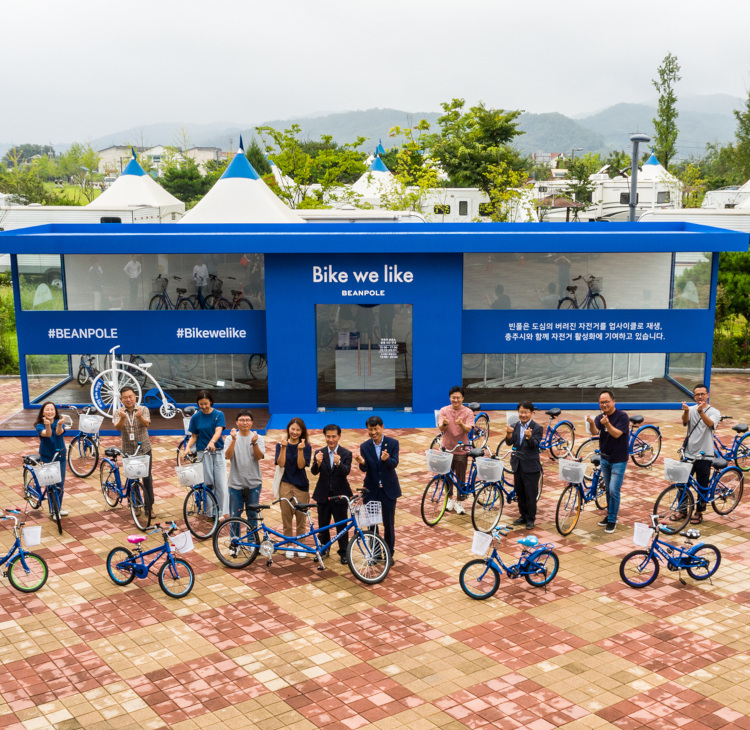 We have to also mention the wonderful cycling destination that was highlighted by Bike We Like’s first campaign on Jeung Island off the southwestern coast of the Korean Peninsula. This is a place that really takes you away from it all, having become Asia’s first official “slow city,” leaving visitors in the company of sandy beaches, clear water and unspoiled nature that was recognized for its biodiversity by UNESCO.

As a legacy of 2018’s project, there are also upcycled bikes to borrow there and take on a 40 km tour connected to a coastal road. In June of last year, Beanpole collaborated with 2 Hope Bike, a social enterprise running a bike recycling business. As with this year’s Bike We Like campaign, they collected and upcycled bikes abandoned in cities before donating them to South Jeolla Province’s Jeung Island.

While cycling along, look out for local salt farms and mudflats, not to mention an incredible view of the horizon dotted with dozens of deserted islands. Ujeon Beach offers a particularly good vantage point, as its white sands wrap around 4 km of coastline.

If you’re looking to do some cycling in Seoul but are worried about those busy roads, then look no further than the Han River, known locally as the Hangang.

Not only are the banks of this river steeped in history, they are also lined with 80 km of cycling paths. There are several places to hire bikes for a very affordable hourly rate along the river, as well as convenience stores and food trucks to provide fuel along the way. A good place to start is Yeouido Hangang Park because it is spacious and located in the center of the city. Renting a bike is easy there and you can head off either west or east or even cross over to the north side of the river. You will notice plenty of other cyclists, but also people of all ages just relaxing by the river in tents and having picnics. Nanji campground near World Cup Stadium in Sangam-dong is recommended if you want to camp overnight during your Seoul bike trip, and there is an ecological park there too.

If you are inspired by the Hangang experience and feeling really adventurous, you might want to plan a nationwide bike trip. Avid cyclists follow a 1,757km course that tracks Korea’s four major rivers through the country’s renowned historical sites, traditional villages and stunning scenery.

A little way outside Seoul, but still within easy subway traveling distance, is a bike path that has become one of the nation’s favorites in recent years. This 25.6 km route in Gapyeong, Gyeonggi Province, opened in December 2012. Cyclists will often hop on a subway from Seoul and within an hour be riding their bikes along the path that winds along the Bukhan River.

You might want to take a little detour and visit popular spots like Jara Island, which will host its highly acclaimed Jarasum Jazz Festival from Oct. 4-6. When viewed from a 1.5 km sky road used to cross the Bukhan River, the local scenery forms the shape of a terrapin, which translates to “jara” in Korean.

There are several subway stops along the Bukhan River, including Daeseong-ri station, which is also part of a much longer 900 km cycling trek being undertaken by the OMC 2019 Korea 5 Mountains event from Sept. 29. The event is part of the partnership between Samsung C&T’s fashion brand Beanpole Sports and nonprofit cycling organization One Mile Closer (OMC).

This volcanic island is simply beautiful, and a treasured destination for local holidaymakers and honeymooners alike. Located about 450 km south of Seoul in the waters south of the Korean Peninsula, it enjoys a fairly moderate climate and is often perfect for outdoor excursions. And that is where cycling comes in!

At 234 km all the way around, Jeju Island’s coastline is made up of 10 courses, which can all be done in one go if you are feeling particularly energetic. But most cyclists will want to pick some attractive spots and hire bikes as they go along. As with the Han River in Seoul, renting a bike is not too expensive – a basic model will cost around the equivalent of US$10 a day. Jeju City has a lot of rental options, and Iho Tewoo Beach is less than 10km away, passing Yongduam Rock along the route with its dragon head shape among the black rocks.

There are many other recommended beaches on Jeju Island that you can bike to. Favorites include Hyeopjae Beach and Hamdeok Beach – both of which capture that slice of paradise so many of us are looking for, and all the better to travel by bike!