When you hear the word “ammonia,” you might immediately associate it with a pungent odor. However, would you believe that it is also a life-giving commodity hidden behind our lives?

As a basic raw material for all nitrogen fertilizers, which are in turn among the most frequently used in the world, ammonia is key to providing the nutrients that crops need to feed the world’s population. Given that the COVID-19 pandemic has worsened food insecurity, it is even more important to work to ensure adequate crop harvests.

With the fertilizer business also being significant to Samsung C&T Trading & Investment Group, let’s find out more about ammonia and the vital role it plays.

At room temperature, ammonia is actually a colorless gas made up of nitrogen and hydrogen atoms. It dissolves in water and easily liquefies at cold temperatures.

Ammonia is also toxic, so it should be handled very carefully to avoid inhalation or contact. Despite its toxicity, ammonia is produced all around us by nature – and even within the human body, as it is a byproduct when we break down protein. The ammonia is then released after being converted into urea.

However, a particular aspect to focus on is ammonia’s importance in the supply of nitrogen to plants, a vital element for their growth. Although there is plenty of nitrogen to be found in our planet’s atmosphere, it is not available to plants in this form. Instead, they get the nitrogen they need from ammonia. With the development of the Haber-Bosch process in the early 20th century, people were able to start manufacturing ammonia more economically, delivering a huge boost to food production.

These days, ammonia helps sustain the food needs of billions of people as a key ingredient in ammonium nitrate fertilizer. You can see various applications of ammonia in the infographic below. 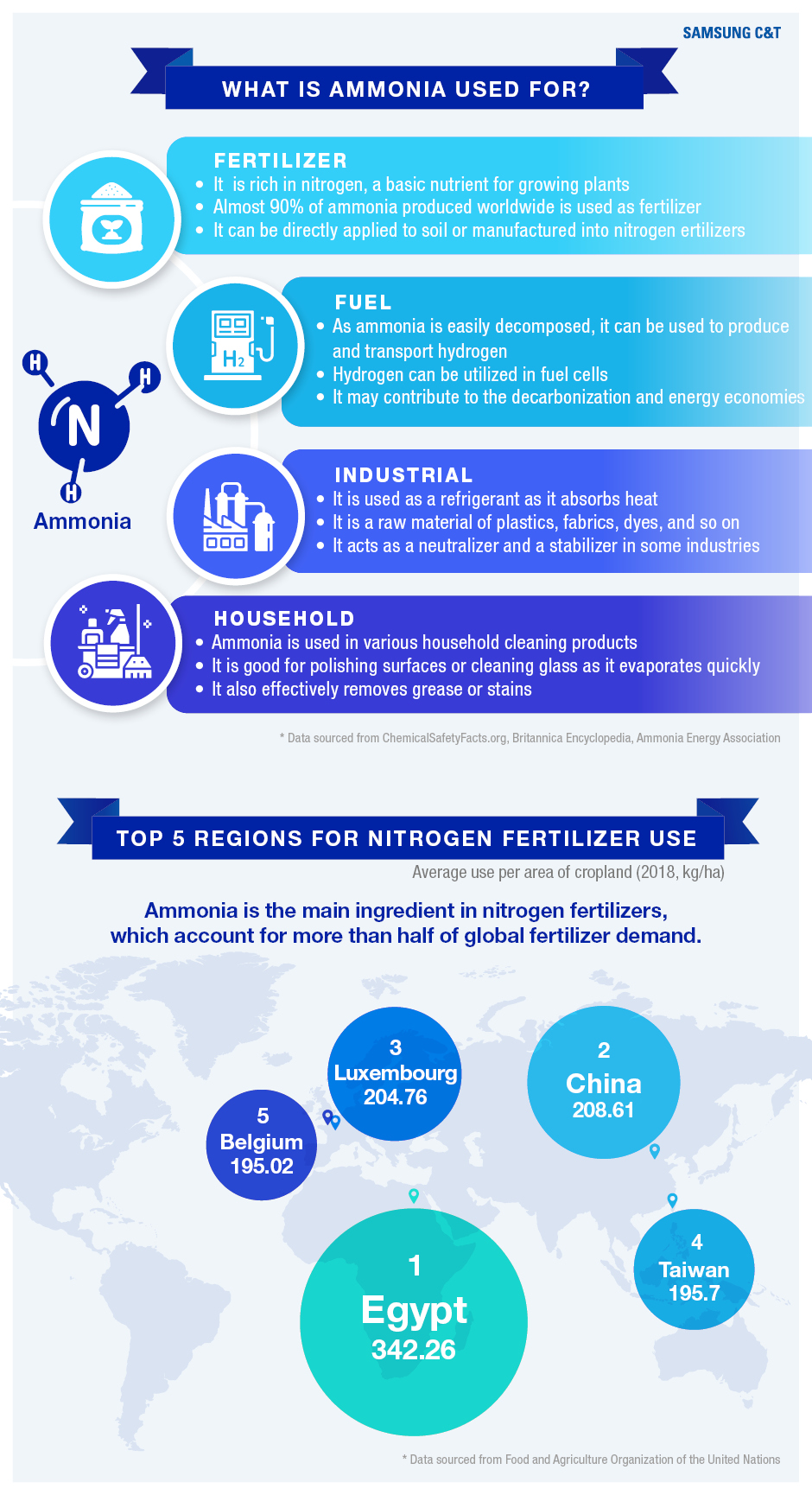 Given the importance of food as a driver of demand for fertilizers, and therefore ammonia, we should start by assessing food commodities.

Earlier this month, we learned that the FAO Food Price Index (FFPI) rose sharply in May, marking the biggest month-on-month gain since October 2010. This was the twelfth straight monthly rise in the value of FFPI, and cereal crops have been an important part of the picture. As for the fertilizer market, its size reached USD 171.7597 billion in 2020 and is expected to grow at a CAGR of 2.4% from this year to 2027.

China was the biggest consumer of ammonia in particular last year, followed by Eastern Europe, Southwest Asia, and the U.S. The world’s ammonia consumption is projected to rise by about 12.9% between 2020 and 2025. Its production is also forecast to expand gradually to 190 million tons by 2022, accounting for almost 60% of total fertilizer ingredient supply, including phosphoric acid and potash.

As reflected in the infographic above, there is additionally growing interest in ammonia in the production of hydrogen as an energy source.

The company’s business covers most of the world from Southeast Asia to Latin America, having become one of the world’s top 10 fertilizer traders. Moreover, Samsung C&T is closely monitoring ammonia’s potential in the production of hydrogen.

So, the opportunities with ammonia seem endless, which is fitting considering this compound of nitrogen and hydrogen stretches throughout our solar system and across space and time.

8seconds brings back Everland’s heritage on its summer clothes