Get the Lowdown on the

Passenger numbers rose last year at airports in Europe, Asia and elsewhere. And with so many planes in the skies, customers are becoming increasingly discerning about the airports they travel to and from.

More money and care than ever before is going into airport architecture, design, construction and maintenance – with some very striking results.

Here’s all you need to know about the world’s five favorite airports, as voted for by airline customers in 2016, and compiled by Skytrax.

L: Hong Kong Airport by eugene_o is licensed under CC BY 2.0

R: Hong Kong: a modern airport by charclam is licensed under CC BY 2.0

Opened to the public in 1998, this is the world’s busiest cargo airport. As the primary hub of Cathay Pacific and a range of other prominent carriers, it is one of Asia’s leading air traffic gateways. The airport is built mainly on reclaimed land on the Chep Lap Kok island. What’s more, it’s due a massive revamp. Work is already underway on its new Three Runway System – with Samsung C&T set to play a key role.

L:  Airport by OiMax is licensed under CC BY 2.0

R: Haneda Airport by Junpei Abe is licensed under CC BY 2.0

Also known as Haneda, this massive airport began life as a small airfield in 1931. It has since grown into the world’s fifth busiest air transport hub, with a staggering 79.2 million passengers passing through last year. Its third, five-story terminal was added in October 2010. Haneda has been busy upgrading its facilities in recent years and now features a fourth runway, new Tokyo Monorail and Keikyu Airport Line stations, and a brand-new international air cargo facility.

R: Licht-Glas Kunst by Polybert49 is licensed under CC BY 2.0

The only non-Asian airport to make the top 5, Munich Airport is decidedly less busy than other European hubs, but has a range of advantages that help it stand out. With direct flights to 248 worldwide destinations, you are never short of places to go. It is also one of Europe’s newer airports, opening in 1992 to replace Munich-Riem Airport, which is now a convention center. Plans are in the works to create a new 4,000m runway, while a new satellite building opened in April last year.

R: Seoul Airport by Michael Allen Smith is licensed under CC BY 2.0

Opened in 2001, this is the newest airport in the top 5. The Samsung C&T-constructed Incheon International Airport in 2015 became the first air hub to top the Airport Service Quality (ASQ) list for 10 consecutive years. Built on an artificial strip of land between two islands off Korea’s west coast, it has a total of 76 boarding gates, and was designed by Curtis Fentress, an award-winning architect whose works include Kuwait’s Arraya Tower and the striking Denver International Airport. With a new passenger terminal schedule to open next year, there is always something going on at this Korean transport hub.

Changi tops the list for the fourth consecutive year, and the airport claims to have scooped an incredible 533 “world’s best airport” lists. You can fly from Changi to 380 cities in 90 countries, and it has recently added a whole new range of city links, including flights to Europe and Oceania, as well as non-stop services to the United States. Opened in 1981, Changi’s annual handling capacity is 66 million passengers. It is located just 17km from Singapore’s business and tourism center, the famous Marina Bay. Big things are afoot at Changi: a three-runway project is underway, with Samsung C&T participating in a joint venture project that will see a runway extended, a new supporting taxiway system link, security fencing and perimeter roads added as Changi looks to improve its capacity yet further. 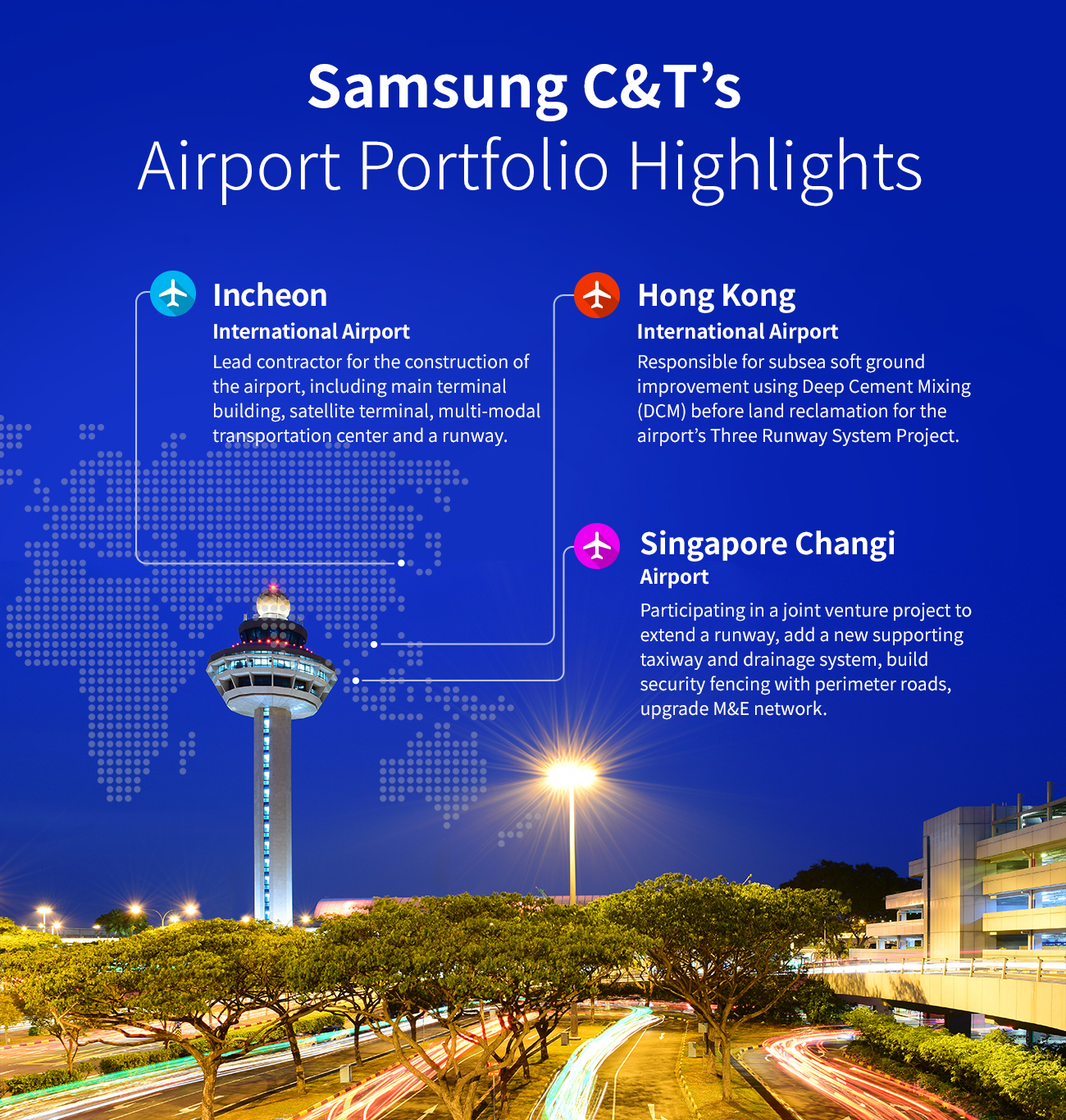 Make It Yours: 10 Hippest Colors for This Spring