In the heart of Samcheong-dong, one of the oldest and most fashionable neighborhoods in Seoul, lies a lifestyle shop with a difference.

Like the other trendy boutique-like stores in the area, Heartist House is packed to the rafters with some of the smartest-looking clobber and accessories in town. But more than just another outlet for clothes and lifestyle items, Heartist House has an additional function: allowing people to touch lives and contribute to building communities.

And it is not just the shop’s owners who get to contribute. Absolutely everyone – from its customers to participating designers and volunteer staff members – all get to play a central part.

More than 18,000 shoppers a month come together with a countless stream of volunteers at a place that is far more than just another store.

What Is Heartist House? 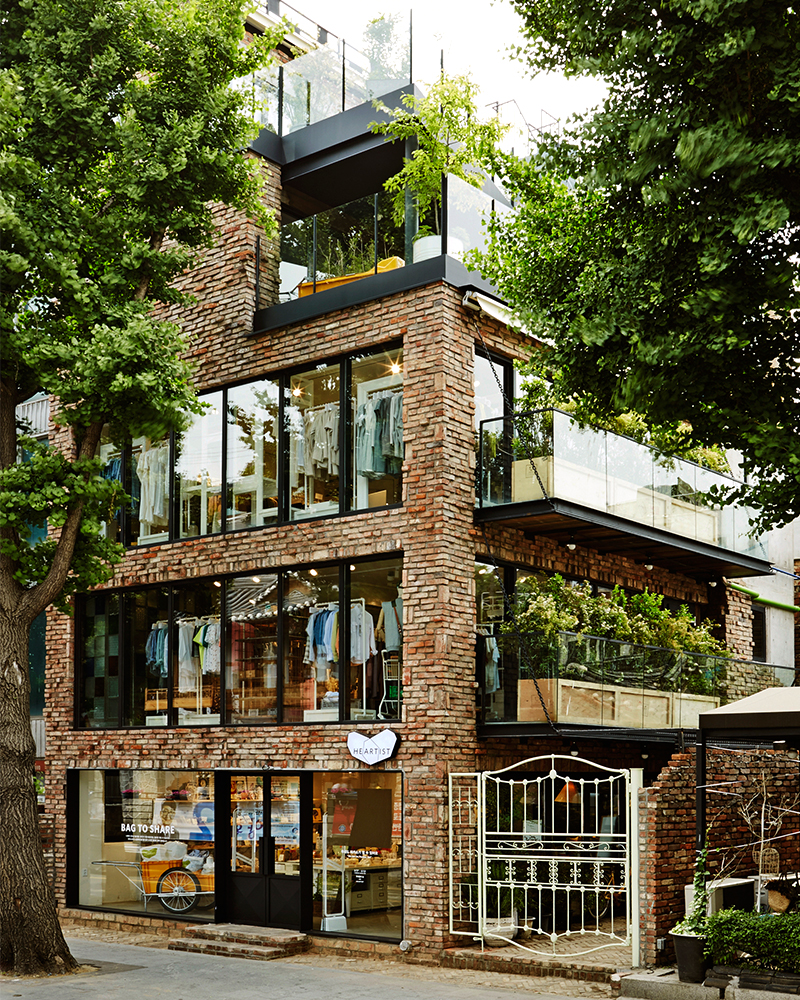 An amalgamation of the words “heart” and “artist,” Heartist House first opened its doors in 2014. With the 60th anniversary of the founding of Samsung’s fashion business, now Samsung C&T Fashion Group.

To celebrate its landmark anniversary, the company decided to create a store that would build bridges between fashion-conscious punters and groups in need of a helping hand, including visually impaired children and low-income households.

The choice of Samcheong-dong as a location was anything but random. For many Seoulites, the neighborhood will always be cherished. It is one of the city’s oldest and most central areas.

In a time gone by, it was home to nobles, civil servants and craftspeople whose business kept them tied to the royal court at Gyeongbok Palace, only a stone’s throw away. But while much of Seoul has raced into a breathless, perpetually busy modernity, Samcheong-dong remains smaller in scale (you will find no skyscrapers around here), and considerably quieter.

It is also home to the densest collection of art galleries in Seoul, along with clusters of small cafés and shops. Largely free of the tourist hordes and a favorite haunt of bohemians and well-heeled fashion fans, the area is seen by many as an island of sophisticated calm.

Samsung C&T Fashion Group was keen to make Heartist House fit in with its surroundings and exude the same charm as other ventures in the neighborhood.

So the company decided to craft what is now Heartist House out of an old warehouse that had stood in the area for some time. With several floors devoted to fashion and domestic goods, as well as a rooftop garden that offers a great view of the surrounding area, the building has much to offer in the charm stakes.

Run by a devoted group of volunteers, this is no ordinary store. It was developed based on five key concepts, namely: reduce, reuse, recycle, refine and recover.

The shopping bags are eco-friendly, and all made from biodegradable materials. More than half of the lights, furniture, mannequins and other interior objects are recycled. The gardens and plants get watered using recovered rain and moisture gathered from air conditioning units. Even the bricks that Heartist House is built with come from an older building.

This ethos is something that shoppers, brands and designers here can all buy into – quite literally. Designers are invited to reinvent products, and create something brand new from an older item, for example.

Meanwhile, donations from Samsung C&T’s range of brands, such as Beanpole and 8 Seconds are also on sale here. And if something doesn’t sell, it goes back to a group of designers who “upcycle” it, turning it something completely different.

One of the most important parts of Heartist House is that all the money raised there goes to its Heart Campaign, Samsung C&T Fashion Group’s CSR program. While helping its neighbors in a variety of ways, the signature program is sponsoring visually impaired children. In 2015 alone, Samsung C&T held 17 events for the Heart Campaign, supporting scholarships and medical expenses for visually impaired children.

In addition to the Heart Campaign, Heartist House offers a wide range of special activities and events to help the community.

The Dream Designers program brought children from low-income families to meet professional designers from the company to learn about fashion and receive hands-on advice.

Heart of Art, meanwhile, provided an opportunity for children to get art lessons and boost their creativity.

30 Market is a designer community that ran a pop-up store at Heartist House, offering customers the chance to get their hands on the works of 15 promising young designers.

Meanwhile, Covering the Trees in Samcheong-Dong was a campaign that saw a group of 56 new Samsung C&T recruits head to the shop’s surrounding area to decorate the trees – with covers that not only spruced up the nature in the area, but also protected the wildlife from pest damage.

And in April, Heartist House ran a pop-up store called Slow Pharmacy, devoted to house plants and the benefits they can bestow upon their owners.

At its core, this is a dynamic melting pot of fashion, craft, volunteer activity and charity work that actively involves not only the shop’s staff and customers, but also other members of Samsung C&T staff, a whole host of fashion and design professionals. That the proceeds of all this activity goes toward helping disadvantaged children is a fact that really puts the heart into everything that Heartist House does.