Why We Can’t Live Without Copper

Note: This is the first in a series of articles on the Samsung C&T Newsroom that will examine several key materials, looking at how these are being utilized by a variety of sectors, including the trading, technology and construction industries.

The importance of copper continues to diversify in the modern world. As a global trader of copper and other mineral resources since the 1990s, Samsung C&T’s copper trade operations see it focus mainly on deposits sourced from Chile, Mongolia and Kazakhstan. The company is also expanding the mineral’s sales in the key Chinese market. As vital as the metal is to modern trade and industry, however, its history actually goes back to the dawn of time.

Copper was one of the first metals mankind developed for use in tool-making and jewelry. In fact, archaeologists say you may have to go back as far as 8,000 BC to find the starting point of the man-copper collaboration.

To say that the relationship between humankind and copper goes back a long way, however, would be an understatement.

The Sumerians and Ancient Egyptians smelted copper and used it to create agricultural tools such as picks and hoes.

In fact, copper was once considered so valuable in the ancient Middle East that royals proudly wore ornaments made of the radiant metal. The Romans, meanwhile, mined it in Cyprus, forging copper coins and weaponry for use throughout the Empire. The word copper actually comes from the Latin cuprum, or “Cyprian element,” as does Cu, its chemical symbol.

Its usage in the modern construction industry is diverse – some of the world’s most notable landmarks are made using copper and its alloys. New York’s iconic Statue of Liberty, for example, is made entirely of copper carbonate.

More recently, the Spring Temple Buddha in Henan, China, built in 2008 was put together using 3.3 million kg of copper alloy. 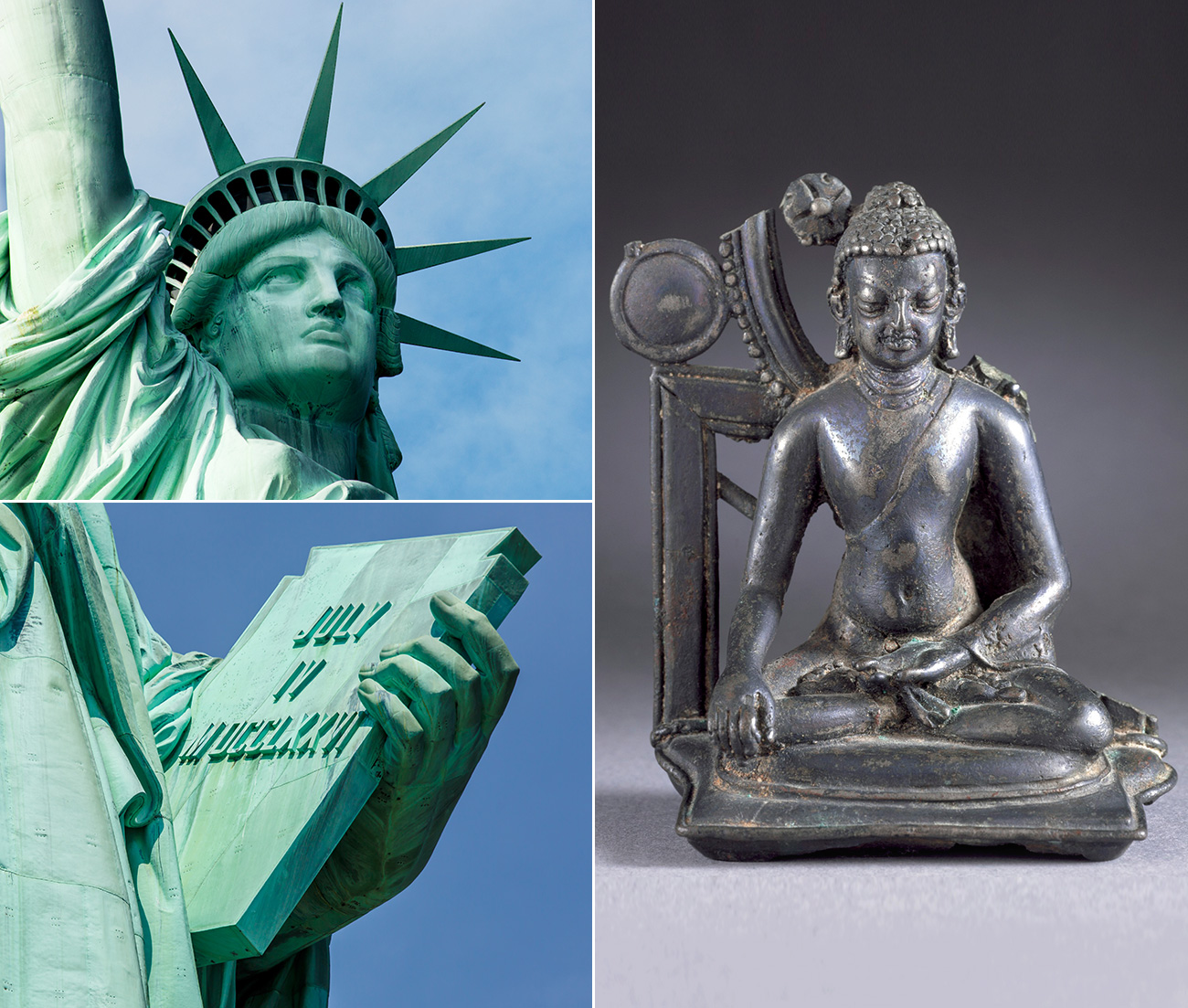 Buddha Shakyamuni by Ashley Van Haeften is licensed under CC BY 2.0

Beyond these impressive landmarks, the metal is used diversely, and in a very wide range of industries. Although it is not always easy to spot copper as we go about our everyday lives, it is in fact everywhere we go. The importance of copper in many cases goes beyond the tangible.

Copper’s key characteristics are high ductility, malleability and thermal conductivity. It is also resistant to corrosion, another factor that has driven it to become the third most used metal in the world today, behind steel and aluminum.

It is infinitely recyclable and endlessly versatile, thus appealing as a practical material for building, electrical components, household equipment and even medical devices such as IV poles, as well as the aerosol guide pipes used in inhalation systems.

What is more, copper’s physical properties mean it easily forms alloys with other minerals. Common compounds include bronze, brass and tin. This diversity makes copper an ideal material for both small and large-scale construction projects.

Copper’s high conductivity means it is now widely used in electrical engineering, while its heat transfer abilities allow it to perform well in extreme or turbulent environments. Heat transfer is a necessary property when it comes to corrosion resistance, since it protects the metal from undergoing chemical or electrochemical reactions by distributing heat quickly and evenly.

Importantly in these times of eco-awareness, copper’s high durability means it outperforms most other metals in terms of sustainability and energy-saving. Wiring, semiconductor chips, pipes, tanks, motors, transformers and more all make extensive use of the metal for these reasons and more.

It is also highly valued by medical professionals and increasingly health-conscious civil engineers. Copper’s strong antimicrobial properties allow for its use in hospitals, shopping malls, training facilities and airports. In 2008, the US Environmental Protection Agency said germ-killing copper alloys could offer long-term protection against bacteria such as the so-called MRSA superbug, and more recently, drafted an efficacy protocol for the antimicrobial testing of copper products.

The world’s biggest copper consumers are China, the United States and the European Union. In fact, China recently began stockpiling the metal as part of a government drive to bring rural residents into bigger cities – without copper, it seems, modern urban expansion is almost unthinkable.

Big consumers such as China continue to modernize, driving up the demand for the metal. According to the Economist, “Global demand for copper is expected to rise by more than 40 percent to 27m tons by 2020.”

Copper reserves are located mainly in Chile, China, Peru and the U.S., and a majority of the world’s copper is mined in Latin America. It is Chile’s biggest export, and the Economist states that in Santiago “even taxi-drivers know the price of copper.”

For global traders, copper’s commodity price serves as a barometer for the world economy. Industry analysts refer to the metal as “Doctor Copper,” as its price can often indicate the overall health of the global economy. Rising copper prices have been shown to indicate growth, while the inverse is often true in the case of an economic slowdown. Steel and aluminum surpass copper in terms of consumption, yet their usage is limited to relatively few industries, making them less useful as economic indicators.

Pricing dynamics are a key driver for copper producers and investor relationships. Increasingly, the global copper market looks toward China as one of the world’s most prolific manufacturers. The Wall Street Journal reports, “China consumes almost half of the world’s copper production and recent data has shown the world’s No. 2 economy is importing record volumes.”

The copper trade is a key indicator in the health of global industry as a whole, as supply provides the resources necessary for future innovations. Actual copper trading sees many different forms of the metal change hands – traders deal in copper concentrates, anodes, cathodes, ingots and even scraps.

Copper has come a long way from its pre-historic origins; from adorning the arms and necks of Egyptian pharaohs to its use in cutting-edge medical care. Its role in the world has ultimately evolved to that of an economic bellwether and a primary stakeholder in the international metals market.

Our need for copper shows no signs of diminishing, and the lack of substitutes for this workhorse metal makes it completely indispensable to modern life. As its uses becomes more diverse by the year, its importance as a trade commodity has possibly never been so high.

Office Cool: How to Choose Biz Clothes That Let You Beat the Heat