[Interview] Call of the Wild:

The Life of an Everland Zookeeper

HOME   >    LIFESTYLE   >    [Interview] Call of the Wild: The Life of an Everland Zookeeper
| by Samsung C&T Global PR Manager

The call of the wild has always had an allure for Kwang-hee Lee. The milestones of his life are marked by time spent with animals. As a young boy in rural South Korea, he grew up close to nature and domesticated farm animals. Then, while studying industrial design, he got a part-time job at the Everland Zoo and he knew he wanted his life to go in a different direction. 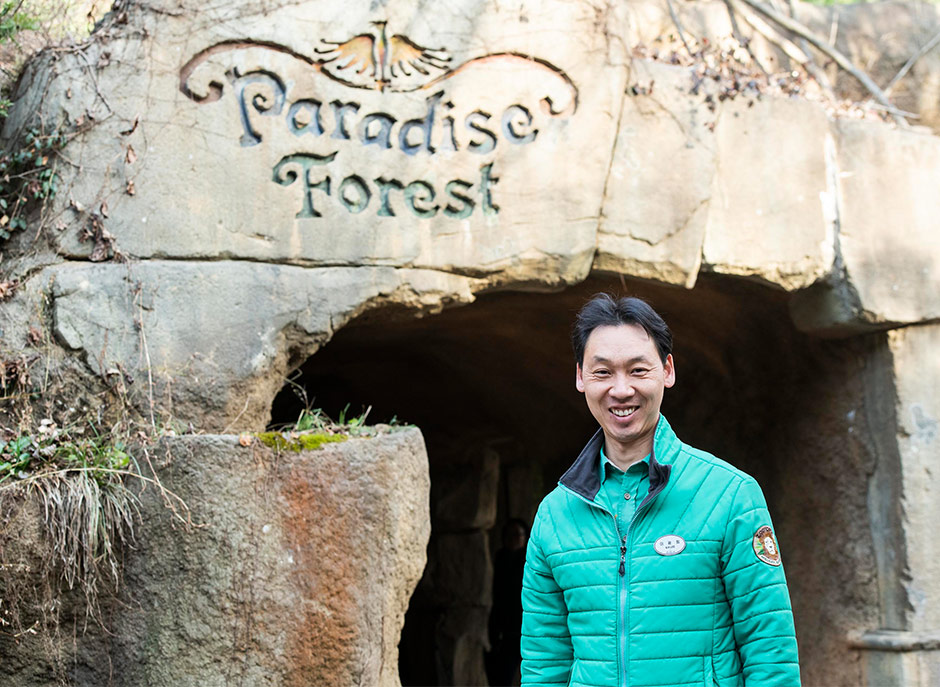 “When I was first hired, I taught guests the developmental stages of chickens, from eggs to hatchlings,” said Lee. “Actually, it was my daily routine when I was a kid, so I was surprised to learn that I could turn this kind of work into a career. I think that’s also why I was so attached to this type of work.”

He loved the job so much that he abandoned his industrial design ambitions in favor of working full time at Everland where he has been a zookeeper for the past 17 years, even appearing on TV to showcase the animals he cares after. But like all great things, Lee’s career started small.

With experience under his belt, he’s the head caretaker of the polar bears. His routine starts by checking on the animals every morning to see how they slept, how much food they ate, and their overall well-being. Then it’s time to clean their habitat and manage the exhibition area. As guests come throughout the day, Lee teaches them all about the zoo’s animals, from their habitats, to food and their life in the wild.

When sunset hits, he helps move all the animals indoors and prepares their dinner before the night shift takes over to keep a close eye on the animals overnight. It’s a job Lee finds rewarding from a variety of aspects.

“I feel most rewarded when I see the animals grow and reproduce well,” said Lee. “I also love seeing them play with toys that I brought for them. The tigers have lots of toys set up for their enrichment and it’s a joy to see them play. I also feel proud when I get people interested in the animals.”

But even with so much joy in the job, there are also moments he finds hard to stomach.

“To be honest, when the animals pass away, that is the hardest time for me to endure,” he said. “Since we have spent so much time together, it is hard for me to accept the reality.”

That reality hit hard this October 17th when Tongki, a 23-year-old polar bear that grew up at Everland passed away.

Polar bears hold a special place in Lee’s heart. His phone gallery is filled with images and videos of Tongki, keepsakes of their time together over the last 15 years.

“Zookeepers share more emotion and communication with animals than anyone,” he said, recalling their time together. “No words can explain when their animals pass away. I hope the animals that went to heaven will stay peaceful there remembering the zookeeper’s love and affection.”

Perhaps the biggest reason that Lee holds polar bears so dear is that they helped him meet his wife. Eight years ago, when Tongki’s girlfriend, Mingky, passed away, Lee found himself inconsolable.

“I couldn’t eat at all for about a month, and it was a really difficult time for me to do my work as a zookeeper,” he explained. “Mingky was one of the most adorable polar bears and I could say that she was my best friend in our zoo. When she died, I could not do anything.”

It’s then that his co-worker, now his wife, helped him recover from his grieving. For that, he has developed a fondness for the animals unlike any in the park.

“The polar bears are very smart and clever,” he said with a smile. “They know how to figure out how objects work, and they can even read my emotions, it’s quite remarkable.”

With such a heartfelt attachment to his animals, it’s no wonder that Lee views his role as a zookeeper as more than just a job.

No Life Without Animals

When Lee first started at the park as a part-time employee, he so loved seeing the animals every morning that when he was up for his promotion, he begged his boss to let him do the work.

“I even told him I did not need a salary to do it,” he laughed. “As I have my own family, it is impossible not to think about money, but it’s not my top priority. The most crucial factor is how much I like my job.” 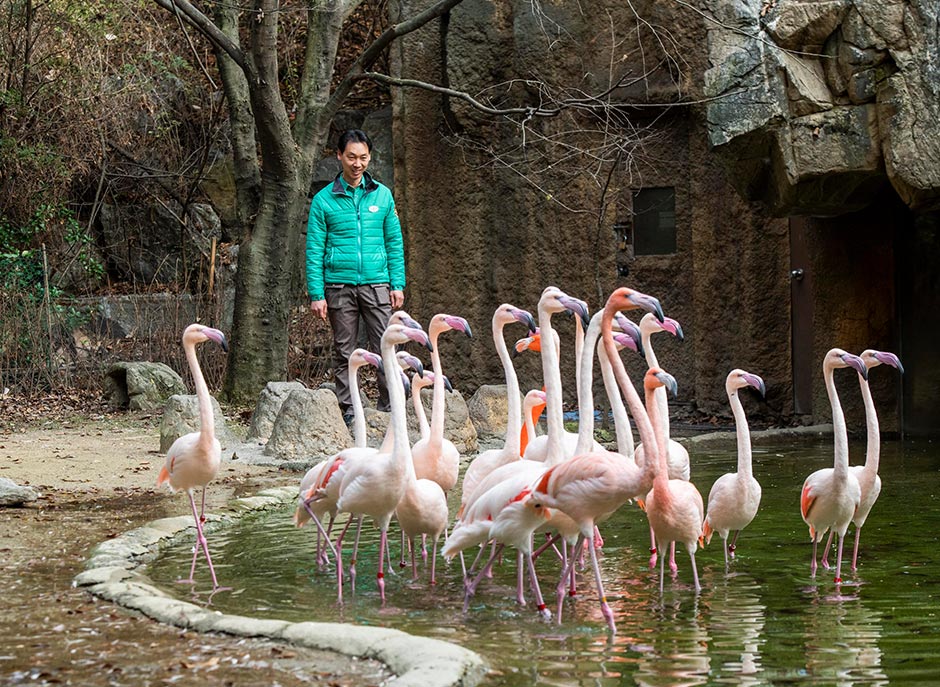 But the job is about more than love of animals. Although many young animal lovers have a romantic idea about becoming a zookeeper, Lee says they often don’t make the cut.

“There were some people who joined up expecting only the good side of the work, but they left after three days,” he explained. “There is a difficult side to the job. People like to watch the tigers eating, but as zookeepers, we also have to make sure they digest the food well, clean the habitats, and check for other problems. It’s only a job for those who both love animals and who are ready to get their hands dirty.” 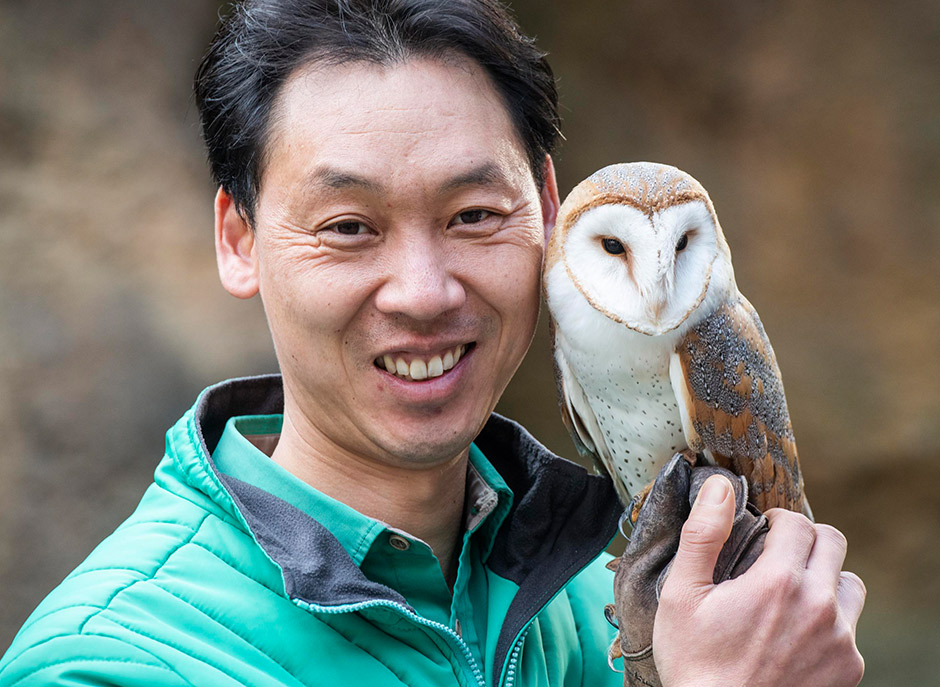 Lee sees the role as one similar to a parent, citing a willingness to understand the sanctity of life and treating the animals as though they were your own family as fundamentals of the job. It’s a philosophy he has adopted since the first day of his job in 2001, which he sums up simply:

“Treat animals as if they are part of your own body, as though you cannot live life without them.”

Beyond the Coral Reef: Where to Spot Pantone’s Color of the Year 2019