Giving Back and Gaining More

There are plenty of sprawling cities around the world, which see development in downtown areas spill over to residential neighborhoods and eventually to surrounding communities. But that’s not yet the case when it comes to Myanmar’s capital, Yangon.

The hustle and bustle of the city comes to a full stop at the northern banks of Yangon River. Across the river is the town of Dala, where signs of urban development are scarce, and many parts are without basic infrastructure such as running water and electricity.

Volunteers from Samsung C&T visited the area to carry out a five-day school renovation project at Dala Primary School No. 19. Some two dozen employees and family members arrived at the beginning of August – the height of the rainy season, which typically lasts from June to October.

The company has been sending employee volunteers overseas for seven years now. Some of the members at Dala had already come to Myanmar last year to offer help at a school for orphans on the eastern fringes of Yangon. Conditions this year were described as more demanding and challenging by some, but the overwhelming consensus was that everyone gained invaluable experience from their time at the school. 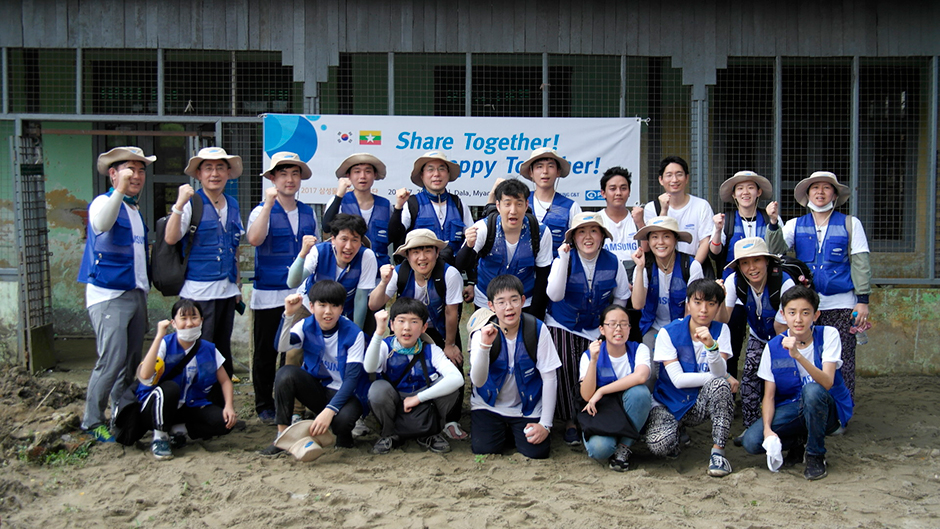 Planning Ahead: Gifts for the Children

Ahead of the trip, members put together a gift set comprising handmade soap and tote bags for the school children. As they were making the soap, they embedded small animal figurines deep inside to help students get into the routine of handwashing.

The volunteers rehearsed their main cultural programs for the children upon their arrival down to the smallest details like a paper-folding art session. 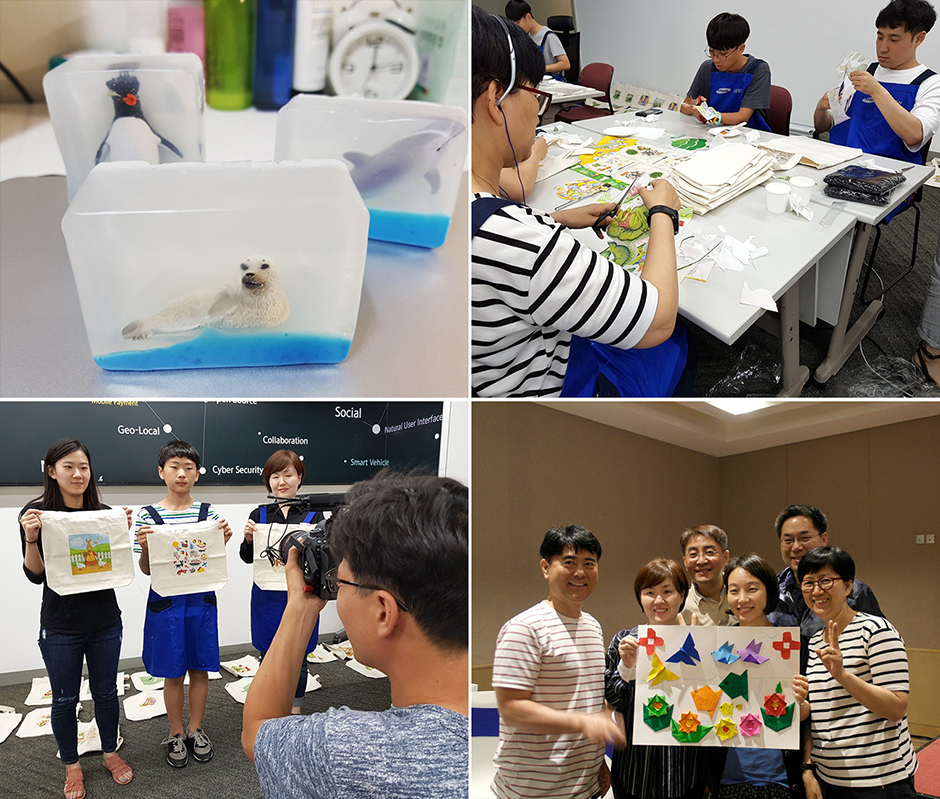 One of the major tasks at Dala Primary School was transforming the schoolyard, which offered very little room for children to play due to mounds of dirt, giant puddles, and a tiny unfinished footpath. Members first had to dig out heavy loads of dirt to level the ground and secure enough room for a wider walkway. They then redistributed the soil across the yard and dragged bricks across the entire area to make sure the surface was even. 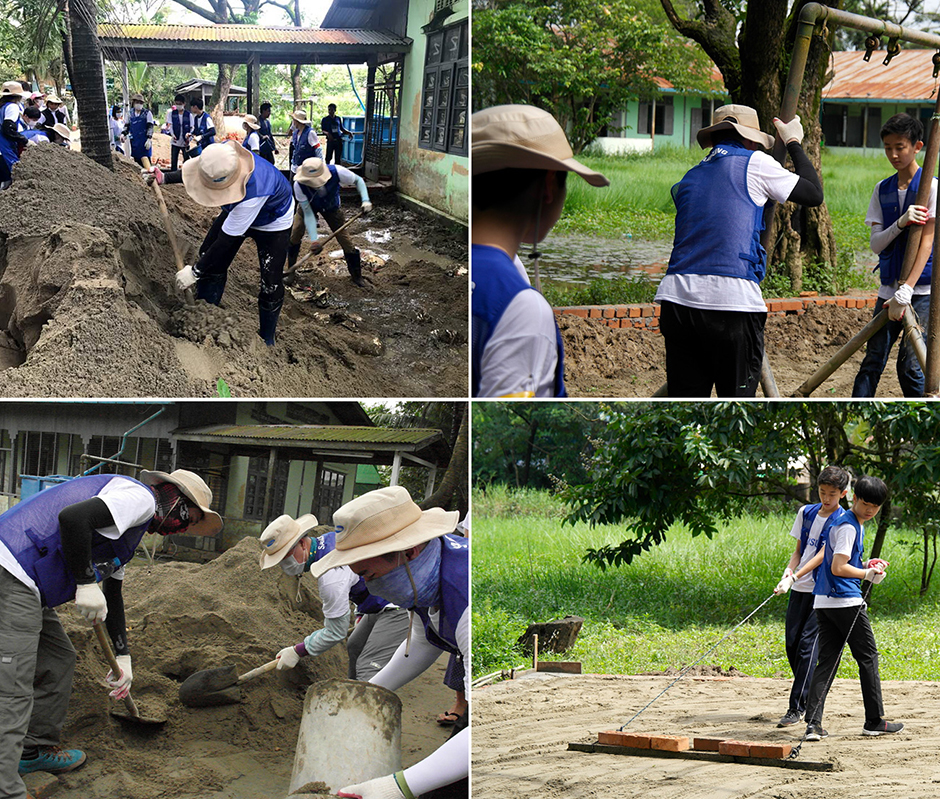 Tae-keun Park, who joined the volunteer team this year with his teenage son, led the bricklaying operation for the walkway. He said the trip had allowed them to spend quality time together and talk about things more openly while sharing the same room.

Park said that although volunteering may look like it’s all about helping others, he feels the participants end up taking more away from the experience. “Our children (from Samsung C&T) were inspired by the students here, the children here were inspired by us, and I was able to look back at things and find more motivation for myself,” Park explained.

Another task that required a great deal of planning was creating an organized space for children to store their shoes. Three volunteers took the lead on building the shoe rack, coming together to take measurements, cut planks of wood, and paint it.

One of the members, Dong-ho Kim, admits things looked rather bleak in the beginning because of the lack of right materials, but he said quick thinking and a change in approach helped them complete the project on time.

Kim was part of the team that visited Myanmar last year and said it was the interactions he had with the children that brought him back. “It was great to be able to step away from all the complicated things in life and focus on simple tasks in front of me,” he said about his experience in Dala. 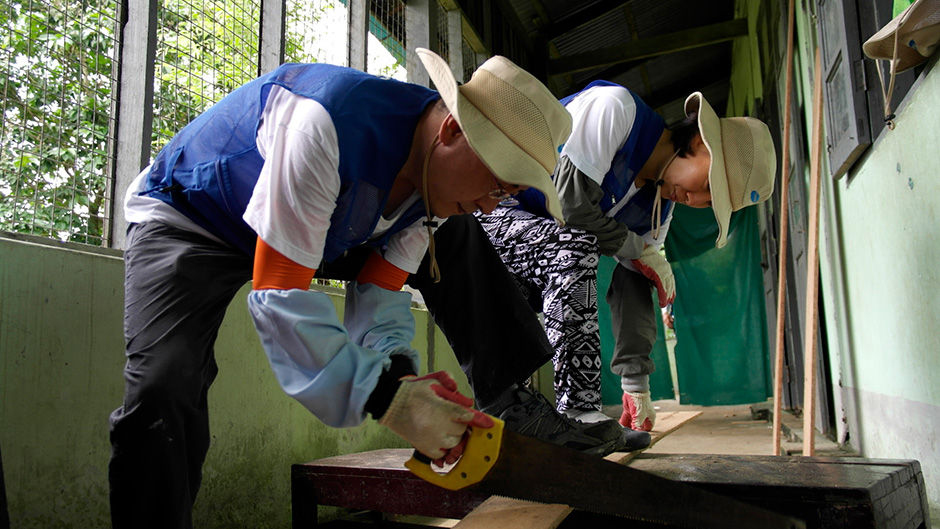 [Shoe Storage Before & After]

Giving the building a makeover with a fresh coat of paint was another priority members had for the school. Large patches of mold were covering the exterior when the group first arrived, likely caused by extended periods of relentless rain and stifling humidity. Conditions inside the classrooms were not much different, sapping vitality from a space that should be providing kids with creativity and opportunities to let their imagination run wild.

The volunteers first scraped off the old paint, then added a primer before giving the walls a fresh coat of mint green paint.

But that wasn’t the end. Three people were tasked with painting a mural to give the classroom more character. Myung-hoon Choi admits it was not an easy job. “I was so worried while we were getting things ready. This was something the children would have to look at every day, so I was really concerned that it would turn out wrong,” he explained. Choi said he was most grateful when people working on other projects stopped by even during their breaks to help complete the project.

“When I first heard the children wanted something about the ocean because they’ve never been to the beach, it broke my heart. That’s why I wanted to do a good job,” another member on the team, Na-ri Bae, said. The response from the children suggests they did. “I’ll never forget the looks on their faces after seeing the mural all done. Their eyes just lit up,” she added.

Getting to Know the Children

On top of all these projects, the volunteers also prepared several cultural programs. Children had the opportunity to fold beautiful paper flowers, decorate their own folding fans, and also compete in a mini Olympics chock-full of games like no-hands candy-grabbing and hula hooping.

Integral to a lot of these activities were the children of Samsung C&T employees, who some proactively, some after a bit of convincing, joined their mothers and fathers on the trip. The group of seven, all middle school students, was involved in all parts of the project from digging to painting as well as taking photos to decorate the classroom.

“Looking at the children here studying in such difficult environments gave me a lot to think about,” Seok-il, the son of Young-jin Kong said, also noting that all the children at the school were exceptionally kind and beautiful – something that most other participants seemed to agree on. 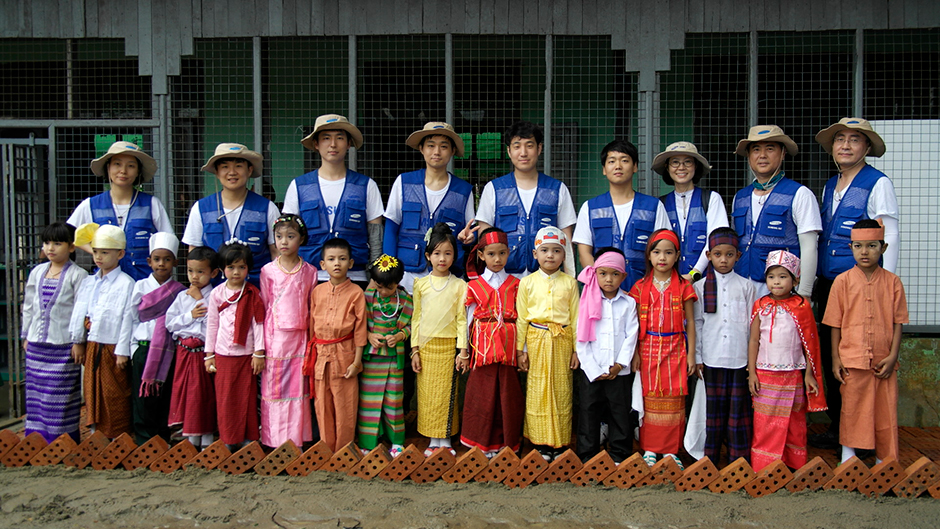 As members wrapped up their five-day project in Dala, many were keen to share what they had learned or come to think about during their stay. Rok-hun Lee, who led the entire operation, was one of them. Given the more challenging conditions, Lee said his greatest priority was ensuring everyone’s health and safety.

Looking back, he said he treasures each and every moment, but that he’ll never forget watching the heavy showers that passed through every afternoon. “I think the experience was not just about helping others but also ourselves, because I’m sure that everyone learned a lot from this all,” Lee said. 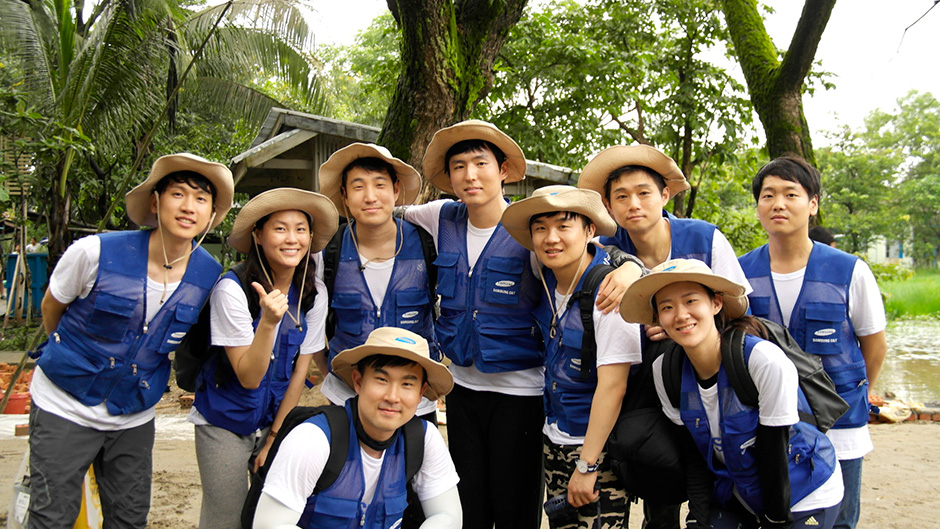