Letters of permission to work

Whether we are talking about building apartments, constructing public facilities or erecting power stations, the construction industry is very labor intensive. From the initial groundbreaking to putting the finishing touches on a building’s interior, sites are full of people moving in different teams, each focused on their own task area. There are countless moving parts and actors, and several different sections of one project may be proceeding simultaneously and almost independently of each other. All this adds up to a greater potential for risks, which, if left unchecked, may lead to workplace accidents. This can all be avoided by the use of an on-site permit system.

What are ‘Letters of permission to work’ and how do they work?

A letter of permission to work is a standardized form used by individuals or teams involved in a specific task to go over and mitigate possible hazards before executing a given task. Because one construction site may involve many partner firms operating under the supervision and management of a construction firm, site personnel coordinate by using the letters to review and discuss tasks with the project’s client and partners prior to carrying them out. The letters cover pretty much every single task imaginable: some 800 to 900 can be issued at a large site on a daily basis. Hazard assessments are carried out and self-checklists are gone through before every job.

When used correctly, the letters enable project partners and workers at sites to perform all tasks safely and effectively. This systemization of safety eliminates virtually all guesswork, and use of the system has contributed directly to impressive safety achievements.

The following infographic explains the three steps involved in the process of obtaining a letter and enumerates 14 example types of permits that may be issued at a construction site. 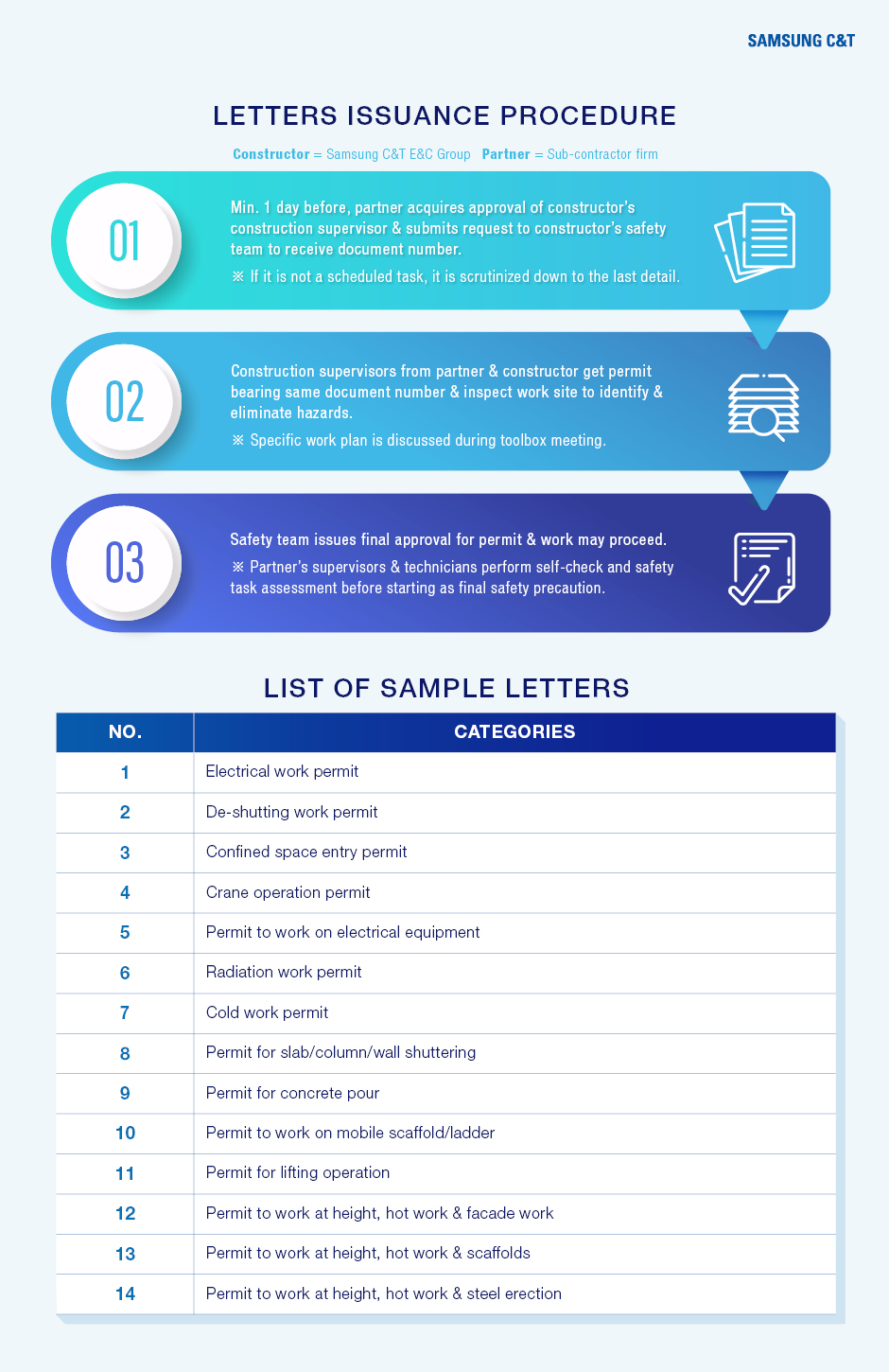 Let us examine a hypothetical example in which Samsung C&T E&C Group may use letters. An inspection reveals a fault in a lobby chandelier at a certain construction site. The ceiling is 18 meters tall, and in order to troubleshoot the problem it is necessary to remove parts of the ceiling and check the circuits that are hidden above. A meeting is called by the constructor with the client and the project’s partners to discuss and agree on seven separate letters. Two sample letters – involving working at height/hot work, and working on a mobile scaffold, ladder, or suspended platform – are given here for illustration. By using these letters and following the hazard assessment and self-checklists, the workers are able to fix the chandelier safely and effectively. 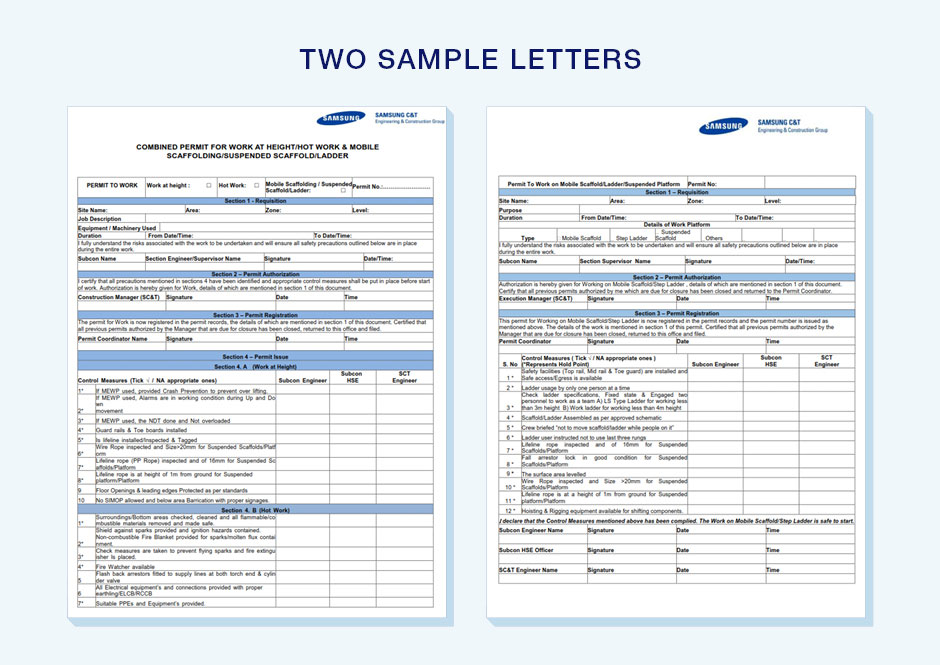 Thanks in part to this rigorous and standardized application and utilization of letters of permission to work, Samsung C&T E&C Group is constantly increasing the number of accident-free man-hours at construction sites worldwide. Furthermore, the company has already garnered a number of international awards recognizing its work in raising safety standards. Last year alone, Samsung C&T E&C Group received an Occupational Excellence Achievement Award from the U.S. National Safety Council; an Accident-Free Recognition and a Safety & Health Certificate of Excellence and Finalist Trophy at the 2019 Annual SHE Award Convention, both from the Land Transport Authority of Singapore; and a Certificate of Appreciation from Jawa Satu Power in Indonesia.

A letter of permission to work is a kind of promise that those involved make towards safety. The rising count of accident-free work hours, displayed at each worksite, provides a powerful motivation to keep that promise because every serious accident resets the count to zero. Prizes and awards are recognizing milestones in the pursuit of making construction sites safer help to buttress that motivation. The end result is that everyone involved in a project, whether working for the developer, the constructor or partner firms, is galvanized to be safety conscious. The letters help to institutionalize and routinize that safety consciousness. This is the goal towards which Samsung C&T E&C Group will continue to strive.