Bridges in various forms have existed for millennial, ever since our ancestors put stepping stones into streams. But as different modes of transport developed and people wanted to carry more objects, the need to build smoother, more solid bridges became apparent. Today, bridge construction technologies and techniques have become a separate science. Not content to merely traverse uneven terrain and rivers, we are now able to cross seas and oceans connecting islands to the mainland and to different parts of a mainland divided by water. Here we introduce six impressive and important sea bridges in Asia and the Middle East starting from East Asia and moving westwards. 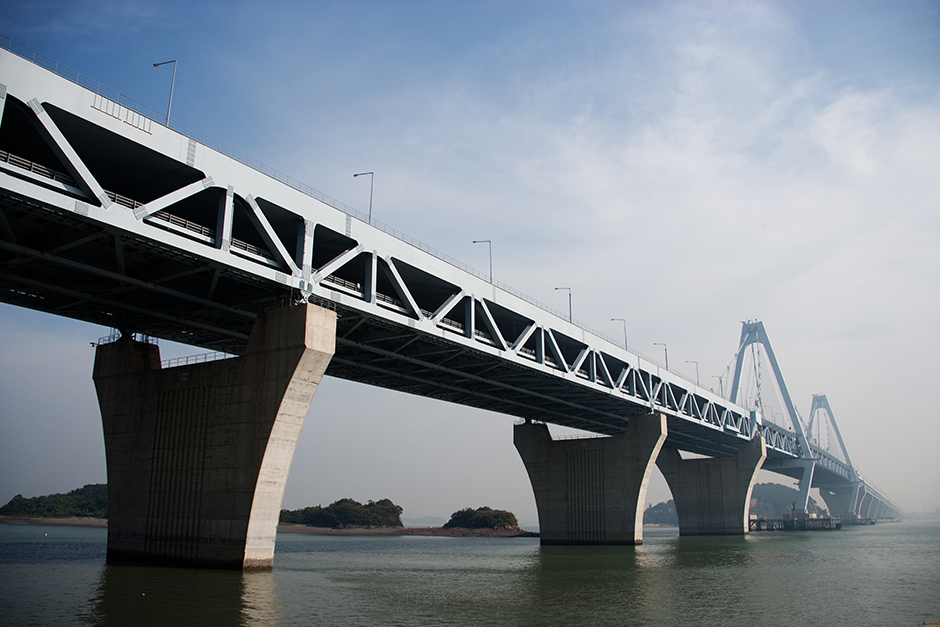 Yeongjong Bridge connects the northeast of the Island that hosts Incheon International Airport to the Korean mainland. It took 5 years for Samsung C&T Engineering & Construction Group to complete the construction. Spanning 4,420 m, the middle part of which is a 550 m suspension bridge, the deck of the bridge hangs from vertical suspenders attached to long suspension cables between two towers.

In constructing it, Samsung C&T E&C became the world’s first builder of a 3-dimensional self-anchored suspension bridge. Unlike most such bridges, where each end of a cable is fixed to a large anchorage block on the ground, Yeongjong is self-anchored, meaning the cables are attached to each end of the bridge’s deck itself. Seen from above, the suspension span of Yeongjong Bridge resembles the tiled roof of a traditional Korean house floating on the blue sea, and the main towers remind us of the round shape of a traditional Korean ceramic storage jar. Also, while most suspension cables have the same width from end to end, here they are very wide at both ends, narrowing as they reach the top of the two towers. As a result, with the vertical suspenders hung at a diagonal angle, this 3-dimensional cable arrangement allows Yeongjong Bridge to be more resistant to wind. 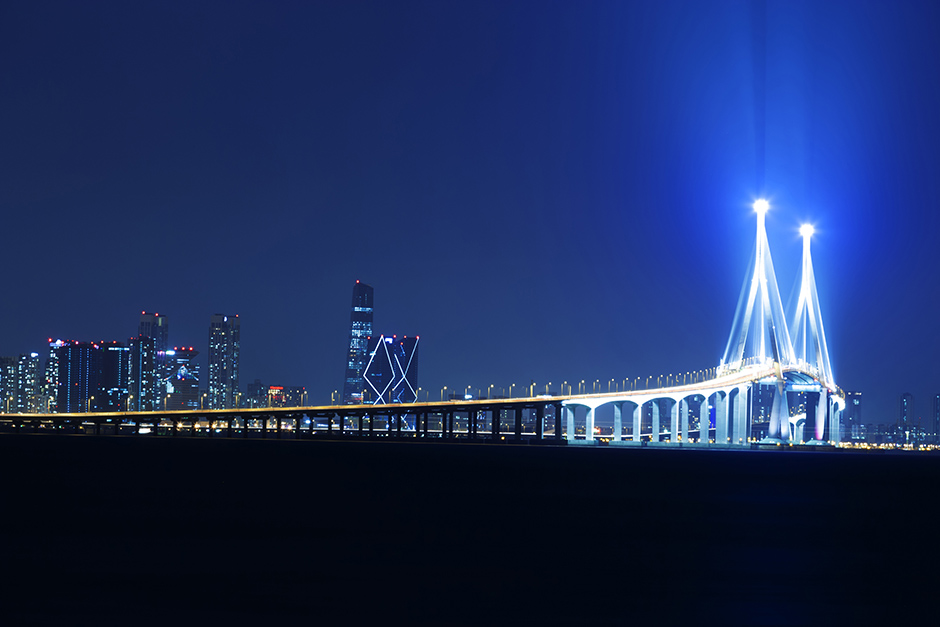 Also over Korea’s West Sea, Incheon Bridge connects the south of Yeongjong Island to the Korean mainland. The total span of the bridge is 21.4 km, making it the longest bridge in Korea. Construction by Samsung C&T E&C took 52 months, from July 2005 to October 2009, less than the time it took to build the shorter Yeongjong Bridge. The main section of the bridge is cable-stayed, which means that unlike a suspension bridge the cables that handle the load of the deck are attached directly to one or more towers. Those of Incheon Bridge are like two giant upside-down letter Ys connected to the deck by 208 cables in a semi-fan-shaped arrangement. The deck is high enough for even large ships to pass underneath, making the bridge a welcoming gateway to the port of Incheon.

Moving away from South Korea there is the Hong Kong-Zhuhai-Macau Bridge. Connecting Hong Kong and Macau to Zhuhai on the Chinese mainland, it stretches for a full 55 km and consists of three main sections: a 29.6 km Main Bridge section flanked on its west and east sides by the 13.4 km Zhuhai Link Road and its 12 km Hong Kong Link Road counterpart. The new construction opened on Oct. 24, 2018, after nine years. The project was a massive undertaking involving a complex structure that includes three cable-stayed bridges and an undersea tunnel. Depending on whether or not bridges connected to undersea tunnels can count as one continuous structure, it may or may not be the longest sea bridge, but it is definitely the longest sea crossing in the world.

The longest bridge in Southeast Asia is the Temburong Bridge in Brunei, which opened on March 17, 2020. It is a 30 km dual carriageway that crosses Brunei Bay and connects two otherwise separated parts of the country. Temburong has both box girder and cable-stayed sections: Two 50m-long 870-tonne precast concrete bridge girders (long, hollow concrete boxes) hold up one span, while a total of three A-framed concrete towers hold up two other spans by steel cables arranged in semi-fans. Upon completion, a trip that usually took 3-4 hours by road and 1-2 more hours by sea became a quick 20-minute drive.

In India there lies another impressive sea bridge, the Bandra-Worli Sea Link, which crosses Mahim Bay and connects the western suburbs of Mumbai to Southern Mumbai. When it was opened in 2009 after ten years of construction, it became the first cable-stayed bridge over open seas in India. In fact, it includes two cable-stayed spans, one of 600 m – the longest in India supporting one of the world’s longest single concrete decks – and another of 250 m. The longer span has a unique diamond-shaped 128 m tall main tower, while the other has a visually attractive 55 m A-frame tower. They are connected to their respective decks by a total of 424 steel cables, the combined length of which is said to equal the circumference of the Earth.

An additional long sea bridge, the Sheikh Jaber Al-Ahmad Al-Sabah Causeway, is in Kuwait. Opened in May 2019, it consists of two sections, one connecting Kuwait City with Silk City the other reaching Kuwait Entertainment City. Together the two spans measure 48.5 km and its 36.1 km-long Main Link (or Subiyah Link) is the 4th longest bridge in the world. The signature element of the causeway is its main cable-stayed span of 200 m. The single pylon that stands roughly 150 m tall resembles a billowing sail and is connected to the concrete deck by 8 pairs of stay cables. The bridge decreases traveling time from 90 minutes by car to less than 30. 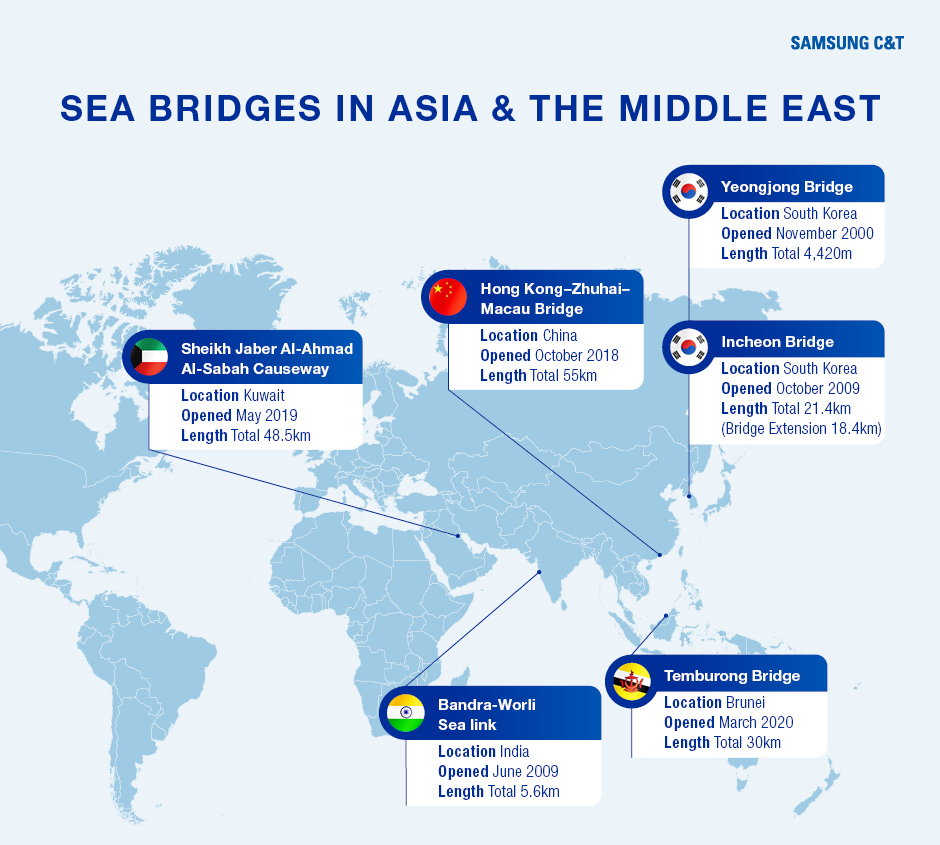 How to stay ‘cool’ in one-mile wear this summer