As the new year begins, Samsung C&T reflects back on some of the accomplishments it made in 2016.

With approximately120 branches in 50 countries, Samsung C&T has been a part of several projects with global influence throughout the past few decades. Here, we will explore noteworthy highlights that made 2016 a particularly eventful year for Samsung C&T. 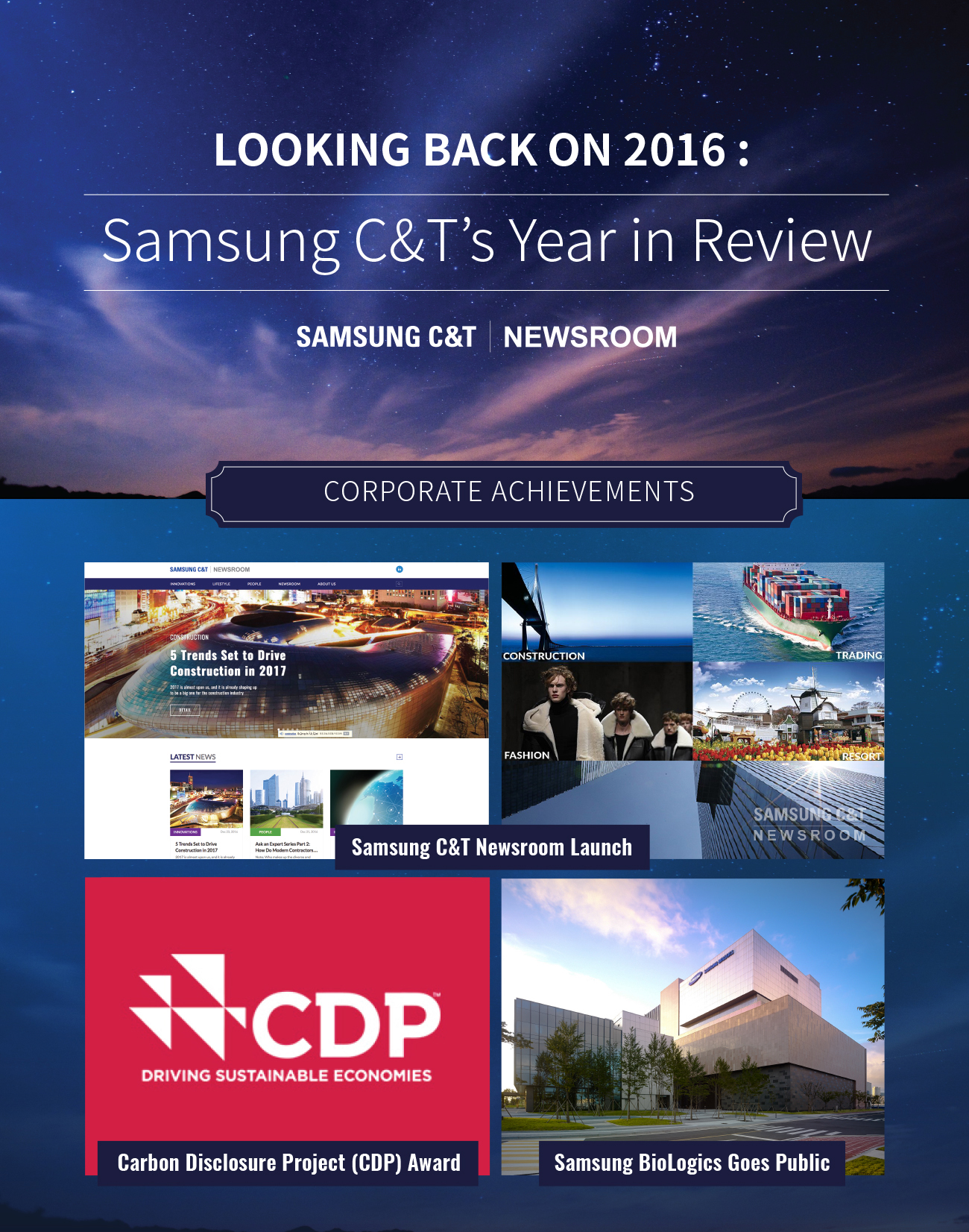 Last spring, Samsung C&T launched its first-ever group-wide newsroom, featuring updates and in-depth stories related to the entire Samsung C&T Corporation. With topics ranging from the use of virtual reality in construction to the arrival of Panda World at Everland, the site serves as an evolving platform for industry insiders and curious readers interested in learning more about the innovative work of the company.

C&T became the third Korean company in history to be entered into the CDP’s carbon management Hall of Fame last November. The company scored top marks for being a leader in climate change response for five years in a row, and along with only five other corporations, also gained admission into the CDP’s Carbon Management Honors club in 2016.

The biotech drug manufacturing subsidiary of Samsung C&T, Samsung BioLogics, raised nearly US$2 billion in its initial public offering in the fall of 2016 – becoming Korea’s third-largest IPO to date. 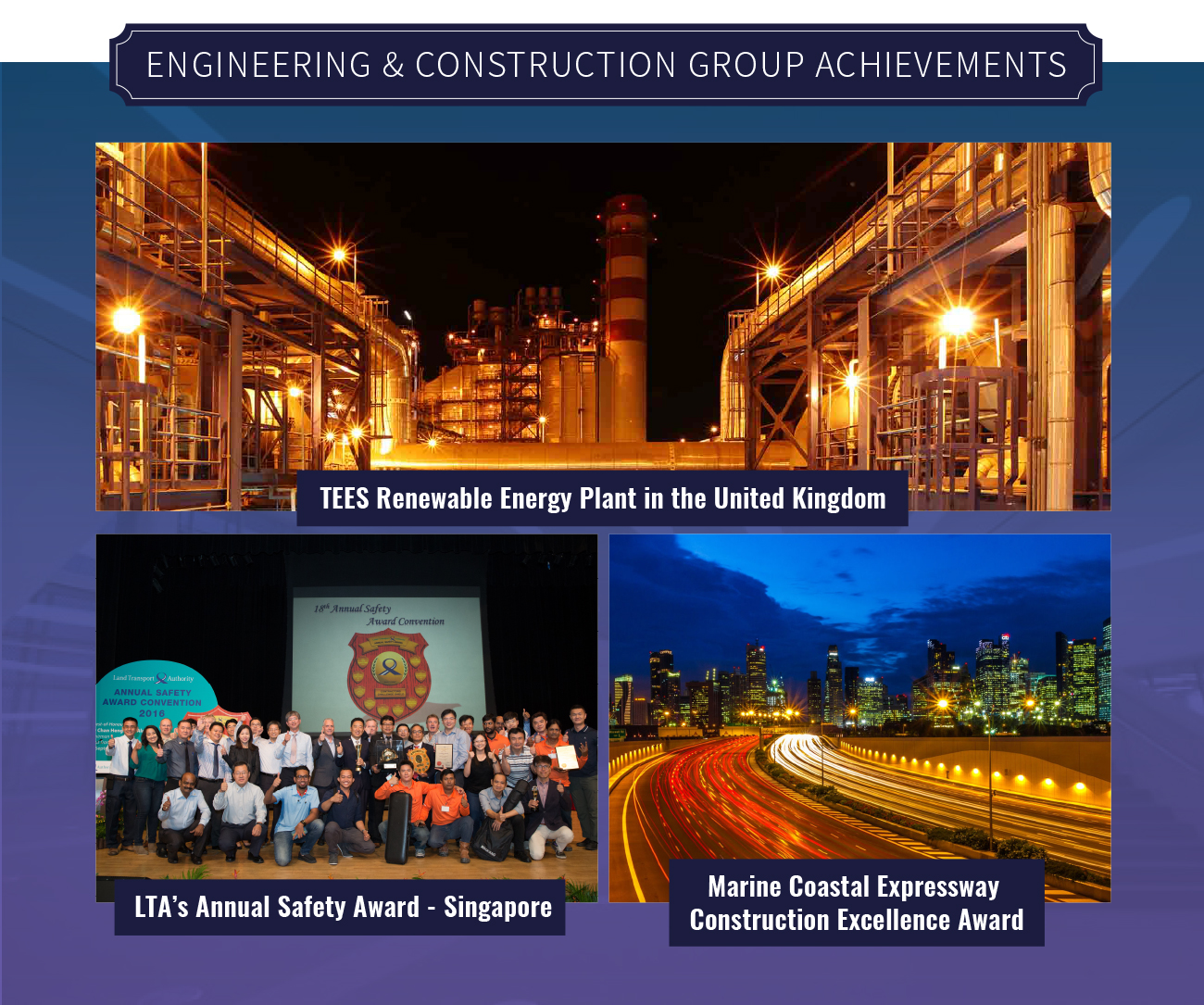 C&T was part of a joint venture that was awarded an engineering, procurement and construction (EPC) contract to build a 299MW biomass power plant in the Port of Teeside, located north of London. The plant is expected to supply electricity to approximately 600,000 homes, and will be fueled by wood pellets and chips, which will allow for a significant reduction in carbon emissions.

Constructed by C&T and opened in December 2013, the Marine Coastal Expressway (MCE) connects existing highways in East and West Singapore to the new downtown in Marina Bay. Considered a feat in construction, the 5.1-kilometer long expressway, which runs 60 meters below sea level, won the prestigious “Construction Excellence Award” at the Building Construction Authority (BCA) ceremony in Singapore in May 2016. 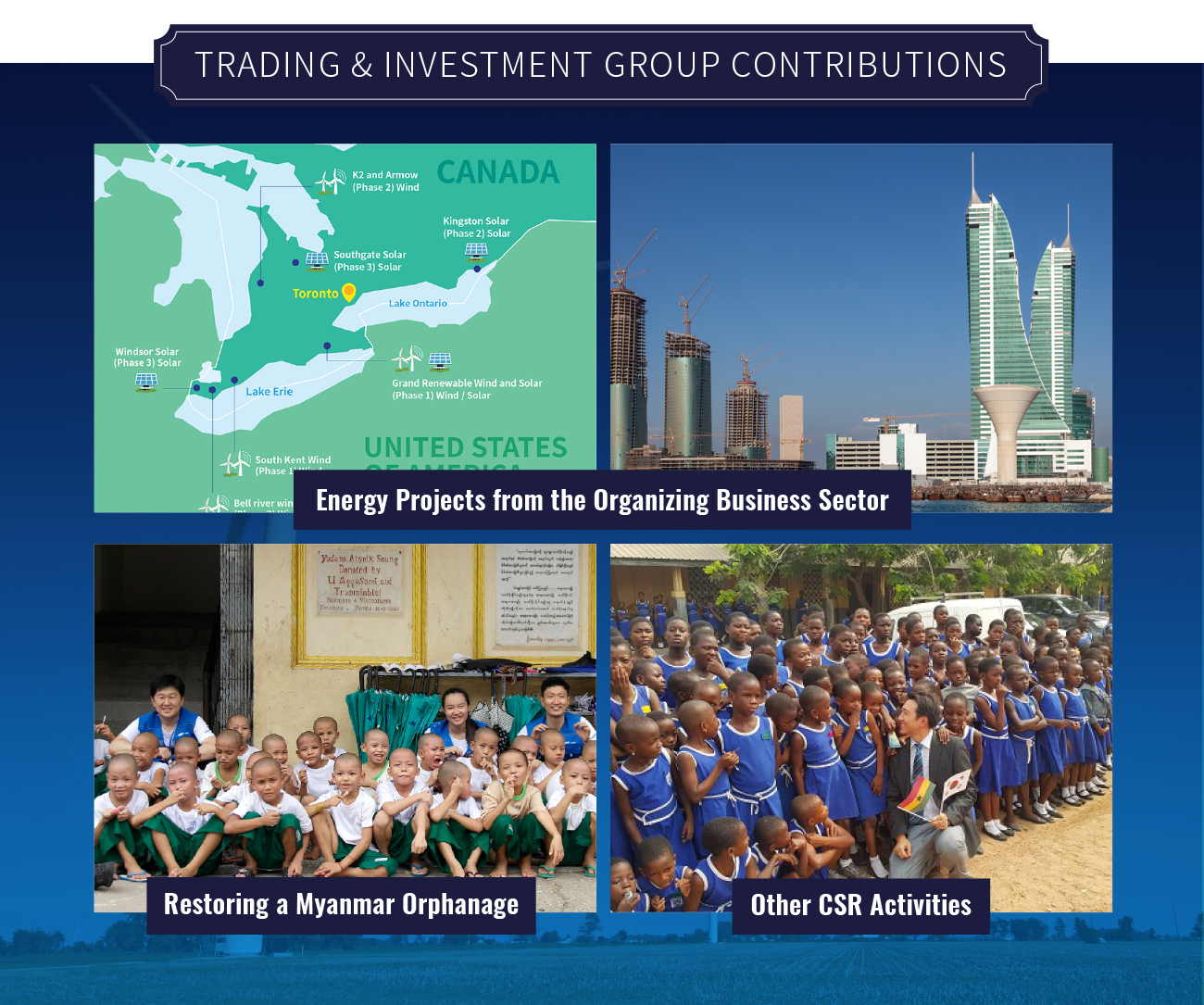 The Trading & Investment Group carried out various overseas projects at some 80 offices worldwide over the past year. In the organizing field, the company became a shareholder of Bahrain LNG WLL, the developer and owner of the joint-venture Liquefied Natural Gas (LNG) Import Terminal project near Bahrain’s Hidd Industrial Area. Samsung C&T joined a consortium that is expected to own and operate the project for 20 years, and has plans to develop the offshore LNG import terminal under a Build-Own-Operate-Transfer (BOOT) basis in Bahrain.

The organizing business was also active in the renewable energy sector, most notably for its large-scale wind and solar energy project in Ontario, Canada. All three stages of the Ontario project are currently underway, and the project’s locally-made energy facilities have led to the creation of hundreds of jobs for the surrounding community.

The company successfully entered the fertilizer market in Ethiopia, supplying fertilizers to the country’s Agricultural Inputs Supply Enterprise (AISE). The deal signaled a turning point for the group’s business interests in the African fertilizer market.

In addition, the company signed a long-term contract with new partners in the U.S. to diversify sourcing locations for single-source copper concentrates. Based on this sourcing contract, it developed a new business model for mixed copper concentrates and established a regional differentiation strategy through expanding its sales to China.

Almost four decades ago, the Trading & Investment Group opened an office in Yangon, Myanmar. The Group has since maintained close ties with the Yangon community, and in August of 2016, a team of employees traveled to Yatanabon Yeiknyein to update an orphanage’s facilities for the 130 boys it provides for. The volunteers were able to connect and bond with the children through engaging in various cultural activities.

Throughout 2016, the company organized and ran the Go Together campaign for multicultural families. Samsung C&T’s Korean employees took part in a cultural exchange with the participating families, allowing them to learn more about the history of their new home, Korea.

During the previous year, the company also joined forces with NGOs to rebuild schools in New Delhi, held blood drives and donated sleeping bags to the homeless in Los Angeles and contributed to establishing libraries in underprivileged communities in Ghana. Employees have shared their support to communities around the world, warmly representing the company as a whole. 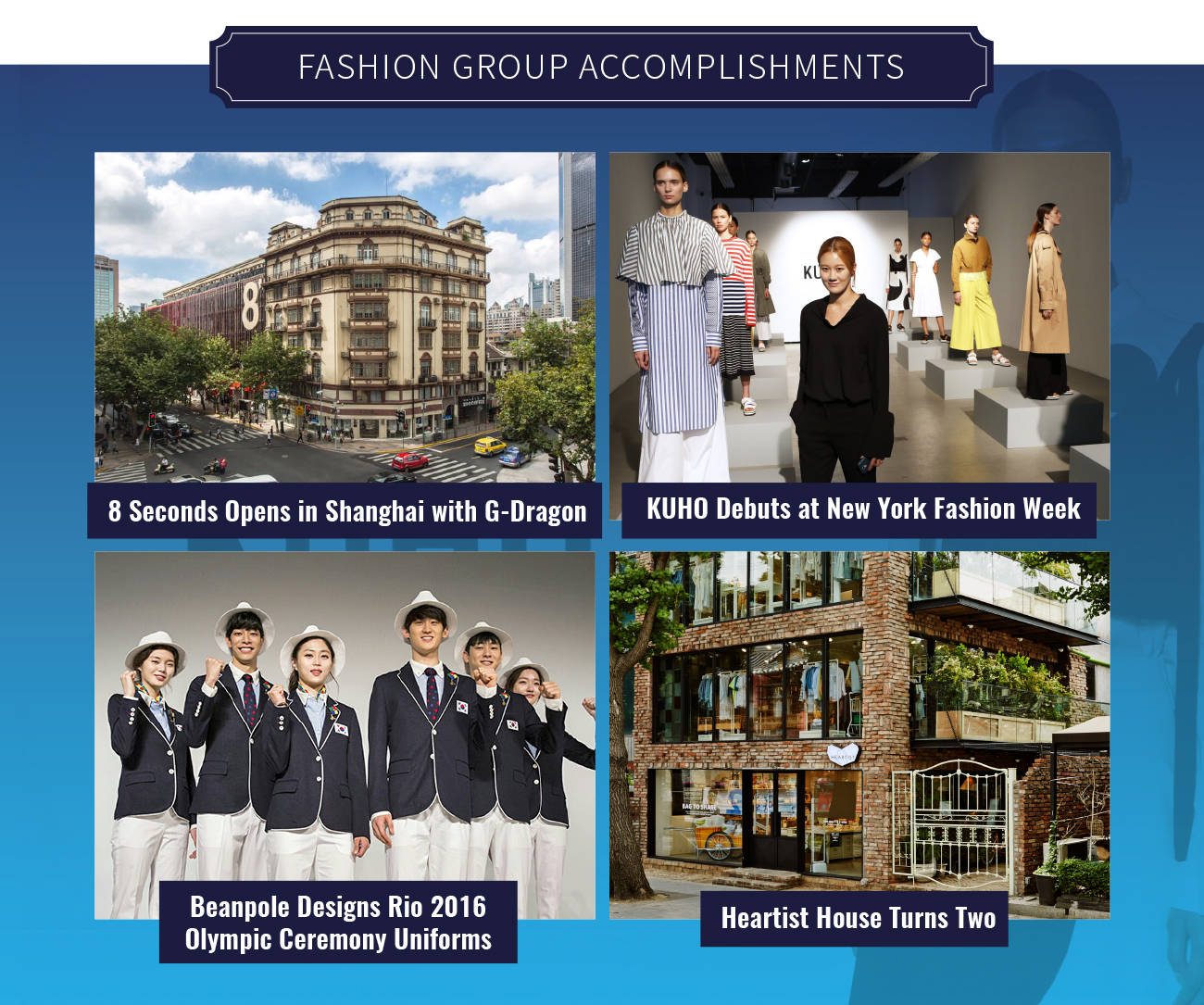 8 Seconds Opens in Shanghai with G-Dragon

Following the successful launch of 8 Seconds’ collaboration collection with K-pop star G-Dragon, the SPA label opened its first offline store in China last fall – also the brand’s first foray outside of its home market. The massive 8 Seconds flagship store in Shanghai represents the company’s efforts in pursuing a place in the Chinese market. A major factor in the store’s grand opening the launch of G-Dragon’s collection, which garnered long lines of local fans and shoppers.

During New York Fashion Week in September 2016, KUHO presented its 2017 Spring/Summer collection for the first time in New York. The contemporary Korean fashion line of the Fashion Group also opened a temporary showroom in New York during this time, with plans to expand its overseas operations in the future.

Beanpole, another label of the Fashion Group, designed the official uniforms for Team Korea at the Olympic Games in Rio. Inspired by traditional Korean clothing known as hanbok, the Olympic uniforms juxtaposed straight and curved lines with three-dimensional silhouettes, and utilized a color scheme that resembled Korea’s national flag.

Heartist House celebrated its second anniversary in 2016 with shoppers, designers and volunteers by hosting a series of socially conscious events. Samsung C&T’s Fashion Group’s goodwill store launched engaging activities for all supporters, including decorating nearby trees with coverings, DIY craft sessions and creative fundraisers to raise money for charities. 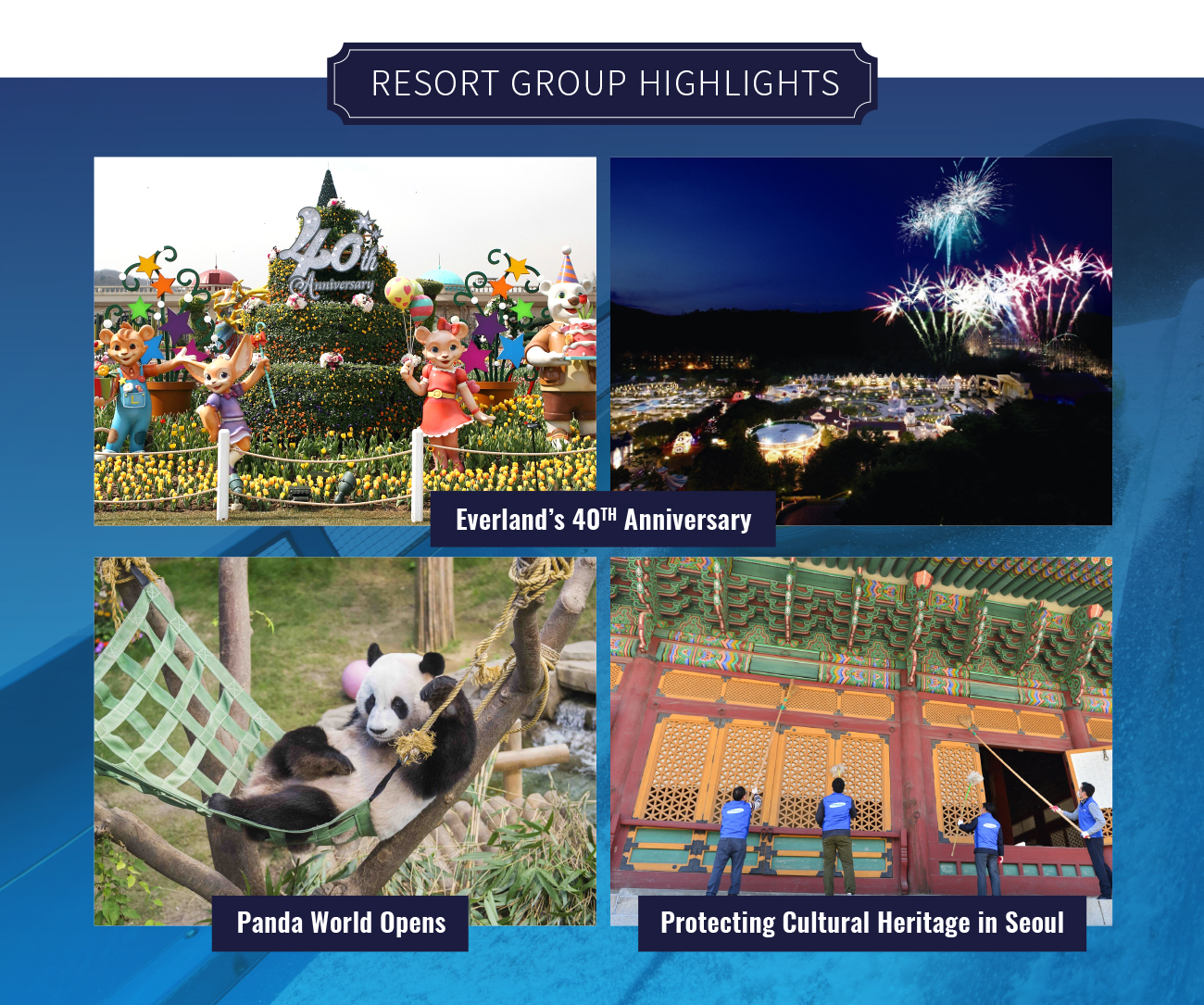 Last year marked the 40th birthday of Everland, Korea’s largest amusement park, accompanied by the milestone of reaching 4 million followers on Facebook. After first opening its doors in the 1970s, the park, which is run by Samsung C&T’s Resort Group, has evolved into a thrilling destination for visitors from around the world. Some of Everland’s unique and exciting attractions include the T-Express, Zootopia and Caribbean Bay.

Two giant pandas, Ai-Bao and Le-Bao, settled into Everland last spring, fast becoming the park’s most cherished visitors. Their home, Panda World, has been one of the top attractions since its launch, and is always bustling with curious panda fans.

Since 2012, Samsung C&T’s Resort Group has donated thousands of charcoal briquettes to disadvantaged households as part of “Love Coal”, a collaborative campaign with the Coal Briquettes for Neighbors in Korea organization. Each time viewers engaged with the event posting on Everland’s official social media channels, the interaction would equate to a partial donation of a briquette. With 5.6 million reactions, the Resort Group was able to donate roughly 100,000 briquettes to 350 families in 2016.

From winning major contracts to organizing numerous community-building CSR activities, Samsung C&T wished to reflect back upon a memorable 2016 for all of its readers. Each of Samsung C&T’s four groups earned several achievements throughout the previous year, and the highlights above merely begin to scratch the surface of the company’s accomplishments overall.

Samsung C&T is looking forward to 2017, preparing for another year filled with innovation and collaboration from all corners of the world.