Over half a decade has passed since Merseybeat pop act Gerry and the Pacemakers tugged at the world’s heartstrings with the hit “Ferry ’Cross the Mersey.” In fact, for centuries, ferries were the only way to cross the River Mersey, the waterway that separates Liverpool and its satellite cities from the Wirral Peninsula.

At around the same time as Gerry and the Pacemakers were topping the music charts, Halton, to the southeast of Liverpool, welcomed its first road crossing – the Silver Jubilee Bridge (SJB).

The towns of Runcorn and Widnes are located on either side of the Mersey. Ironically, although they are part of the same borough (Halton), the overworked and ageing SJB is currently the only road crossing that links the two settlements. This situation has led to major congestion issues in the area.

With Runcorn and Widnes both growing fast, decision-makers have realized the need to act. The British central government has collaborated with the local council in Halton and private enterprises to devise a solution: a 1km-long, six-lane cable-stayed bridge called the Mersey Gateway. 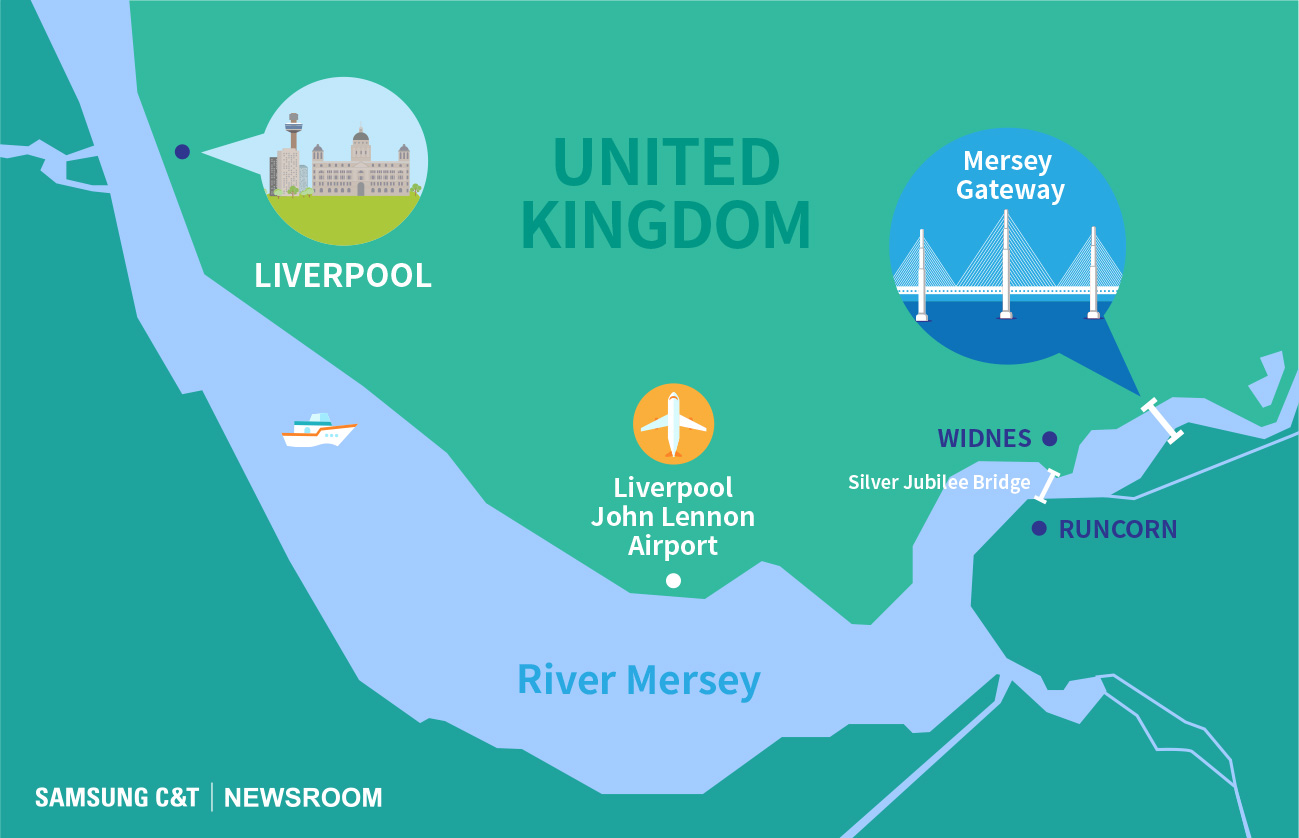 As well as the bridge itself, the Mersey Gateway will also comprise some 9.2km of roads that are set to link Northwest England’s main motorway networks.

The project is one of the UK’s biggest recent public infrastructure initiatives, and was named as a “Top 40 Priority Project” in the government’s 2014 National Infrastructure Plan. The Mersey Gateway has also won global attention from auditor KPMG, which named the bridge as one of its top 100 international infrastructure projects.

For a project of this scale, Halton Borough Council realized that it would need to find contractors with expertise in the field of bridge-building. In came Samsung C&T, as part of a joint venture with Britain’s Kier Construction and Spain’s FCC Construcción.

In 2014, Samsung C&T CEO Chi Hun Choi said, “We are honored to be involved in the Mersey Gateway project. It is one of the biggest civil engineering projects in the UK. Samsung C&T has a wealth of global experience in civil infrastructure, and a strong record of safety and quality. We look forward to working on the project to stimulate economic growth in the region.”

The bridge will feature 146 stay cables, each consisting of up to 91 individual steel strands, as well as three pylons, the tallest of which is 125m.

Contractors have also decided to make the bridge as visually impressive as possible. Instead of making the Mersey Gateway’s central pylon its highest, it will in fact be the shortest at 80m, making for an eye-catching design. Its cables will be a distinctive light green, intended to match the colors of the SJB.

The new bridge is slated to open in fall this year, but has already galvanized the area. Local newspaper the Liverpool Echo last year described the structure as “iconic.” Meanwhile, Halton council leader Rob Polhill said, “The landscape of Halton is changing, and I would encourage everyone to catch a glimpse of the exciting progress.”

Project director Gareth Stuart added, “The stay cables will make the structure one of the most recognizable bridges in the UK.”

Construction on the bridge has led to new job opportunities, both for seasonal and full-time posts. The project is running an apprentice program in conjunction with Halton Borough Council. In some cases, locally hired apprentices have even gone on to find full-time posts with the project.

Polhill explained, “The Mersey Gateway has aimed right from the beginning to create employment and training opportunities for local people.”

Along with the new Mersey Gateway Environmental Trust, developers have pledged to make the project green. The trust will be charged with environmental conservation in a 1,600ha section of the Mersey Estuary that stretches eastward from the new bridge. It will also take charge of a new 29ha nature reserve next to the bridge. These conservation efforts, say developers, are unique for a major British construction project.

Liverpool River Mersey – Dusk by Bernard Rose is licensed under CC BY 2.0

Locals have been looking forward to welcoming the completed bridge ever since ground was broken back in 2014.

Now, with only a few months to go until the first cars cross the new bridge, the construction has entered its most exciting stage. Residents can now look out at the river and see the stay cables being connected to the expanding bridge deck. It is a scene that changes week by week, building anticipation for the new roadway.

Thanks to Samsung C&T’s experience in cable-stayed bridge construction, this final crucial stage of construction is going to plan. It seems tourists in the region will soon have a brand-new landmark to take in.