The most important challenge for industry professionals is making what they do appear vibrant, interesting and dynamic to recent graduates. When young people join a trade, they want to believe that it will lead them to bigger and better things – to adventures, excitement and career fulfillment.

Construction is no different from other industries in this regard. That is why, in an effort to nurture the brightest young talent, many companies are now taking an innovative approach to training new hires. Instead of forcing recent recruits to undergo often-dull office apprenticeships, they are offering exciting onsite learning.

The Samsung C&T Engineering and Construction Group’s On-The-Job Training (OJT) program is one such initiative. With a range of construction projects underway all over the world, the program offers rookie engineers valuable on-site experience in a range of international settings.

Samsung C&T Newsroom caught up with Sang Hyuk Lee (26) and Seung Gyu Ahn (25), junior associates in the Civil Business Unit, and recent OJT “graduates.” As part of their training, Lee and Ahn spent six months in Merseyside, in Northwest England, working on the Mersey Gateway, a cable-stayed bridge and road network that the British media is already calling “iconic.”

Samsung C&T Newsroom: What does the Samsung C&T OJT program involve and how does it work?

Sang Hyuk Lee: Every new hire goes on a six-month OJT program – before they are even allocated to a business unit. The HR department assesses recruits on their ability, language skills and OJT preferences. It then decides whether they would be better suited to a domestic program, in Korea, or to an international assignment.

Seung Gyu Ahn: Typically, one to three OJT trainees get to work on a project at any one time. In our case, we were both selected to go out to the Mersey Gateway project at the same time, although the roles we ended up performing there were quite different.

C&T NEWSROOM: Did you specifically request to work on the Mersey Gateway?

AHN: I must confess that I didn’t know much about the project beforehand, but I was overjoyed to have the chance to take part. It’s such an exciting project – one that is going to transform the entire Merseyside region. It was amazing to cut my teeth on a job of this scale.

LEE: I actually volunteered for the Mersey Gateway. I have always been fascinated by bridges – I used to build model bridges as a child, and have long dreamed of becoming a bridge engineer. I was thrilled to be selected.

C&T NEWSROOM: What kind of project is the Mersey Gateway?

AHN: It’s a joint venture project involving Samsung C&T, Spain’s FCC Construcción and Britain’s Kier Construction to build a new bridge crossing across the River Mersey, near Liverpool, as well as a network of roads. Samsung C&T’s role involves building the bridge itself, as well as the approach viaduct, the road that connects to the bridge. It’s a major project that the UK government is actively supporting – so, understandably, there was a lot of activity going on.

C&T NEWSROOM: What was the site like when you first arrived?

LEE: I think we were quite lucky, in a way. The OJT trainees who were at the site before us worked on the initial stages of the construction, which mainly involved a lot of digging. We didn’t realize beforehand, but we were arriving at a very crucial point indeed – when the pylons were being installed, and when we were about to begin laying the bridge’s deck. That’s the point where you can see real, visible progress happening every day, and the bridge really taking shape.

C&T NEWSROOM: What kind of work did you do?

AHN: I was involved in the design process for the cable-stayed bridge. That involved conducting surveys, checking plans for potential errors and gauging the tightness of the bridge’s cables. I was working in collaboration with other Samsung C&T staff, as well as members of the FCC team.

LEE: I was part of the operations team, which takes charge of site management. Working at the site itself involves checking everything is being done according to plan and on schedule.

C&T NEWSROOM: What did you learn?

LEE: Construction is becoming increasingly multicultural nowadays, and working on an international joint venture like this was an eye-opener. In addition to our (mostly Korean) workforce, there were Spanish workers from FCC, Portuguese subcontractors and local British workers. Merseysiders are known for their distinctive Scouse accents, and even some fellow Brits have a hard time understanding them! But the longer you spend on a site like this, the more you get to understand the way other people communicate with one another. I even learned a few words in Portuguese and Spanish, as well as a few handy Scouse expressions!

AHN: As well as the language, you also get to learn a lot about the way different cultures work. And people from around the world prefer working according to different timetables. There are even very big differences between the way that Portuguese and British people work, subtle differences that nobody really knows about until they start working onsite together. 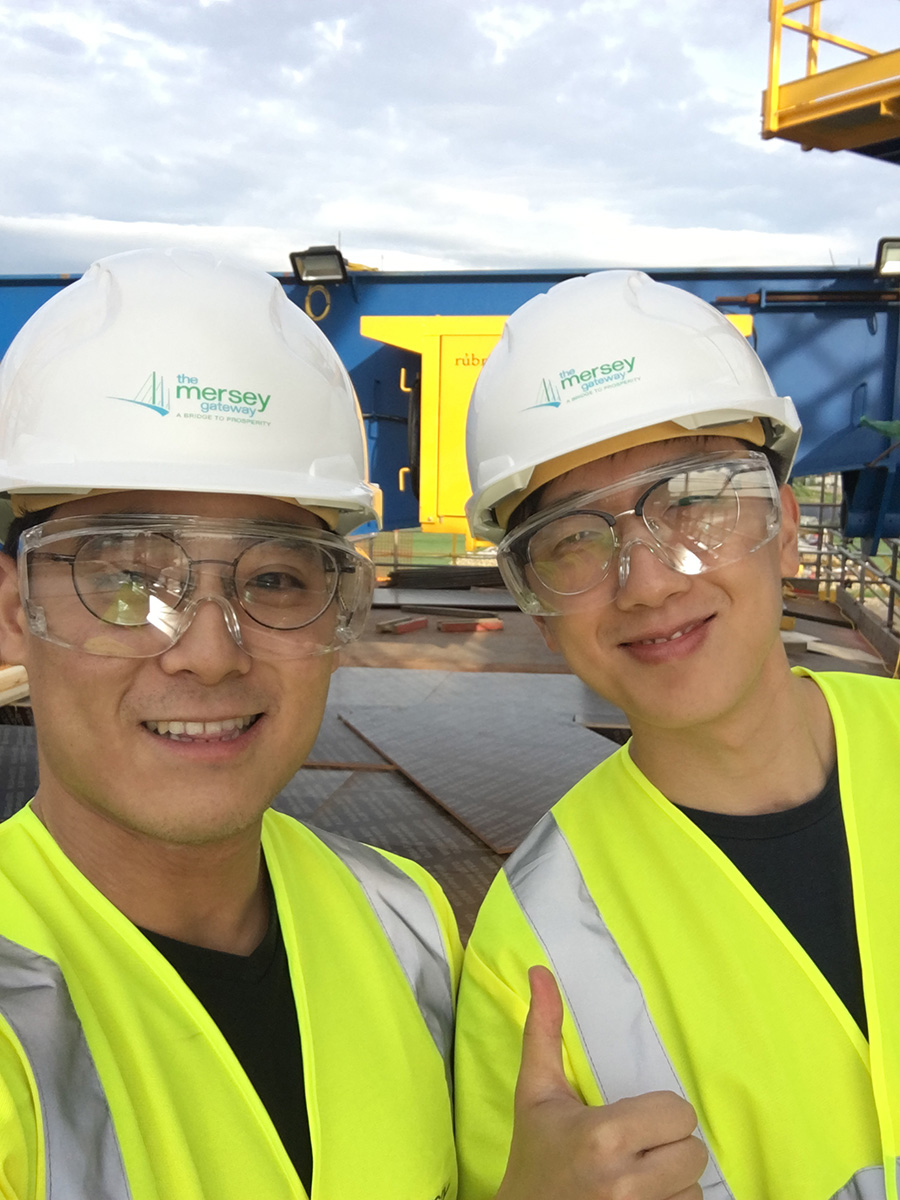 C&T NEWSROOM: How do you think you will use your experience in the future?

LEE: Some things in construction are universal. Learning how to work with concrete and fix a cable are transferable skills that you can take with you anywhere, for example. But working on a multicultural site like this, in a country far from home – that’s invaluable. It teaches you a lot about the construction business. It also teaches you to be open-minded and receptive in everything you do.

AHN: It has really taught me a lot, and made me fall in love with bridge construction. I’d like to get involved with more bridge projects in the future – and perhaps one day build the Ahn Bridge!

The Construction Crane Transitions into the Digital Age

The Physics Behind the Thrill – Energy Matters on the T-Express