A Miracle for 12 Million

Earlier this year, Seoul city rolled out special buses for commuters in a few key locations across the city. Instead of covering a full route, they operate during busy morning hours in addition to existing buses, shuttling people back and forth between high-demand areas.

This is a simple example of how the city responds to demand from its 12 million users of public transportation. Nine subway lines connect the city through an intricate web underground, while an endless stream of buses crisscross town through designated bus lanes above ground

Seoul’s mass transit system was not built overnight. Over the years, the metropolitan government has made continual improvements and incorporated smart technology to make every ride more efficient and a little bit more pleasant. It’s no surprise Seoul has landed on numerous lists for having the best public transportation, the most sustainable mass transit, and a chart-topping metro. 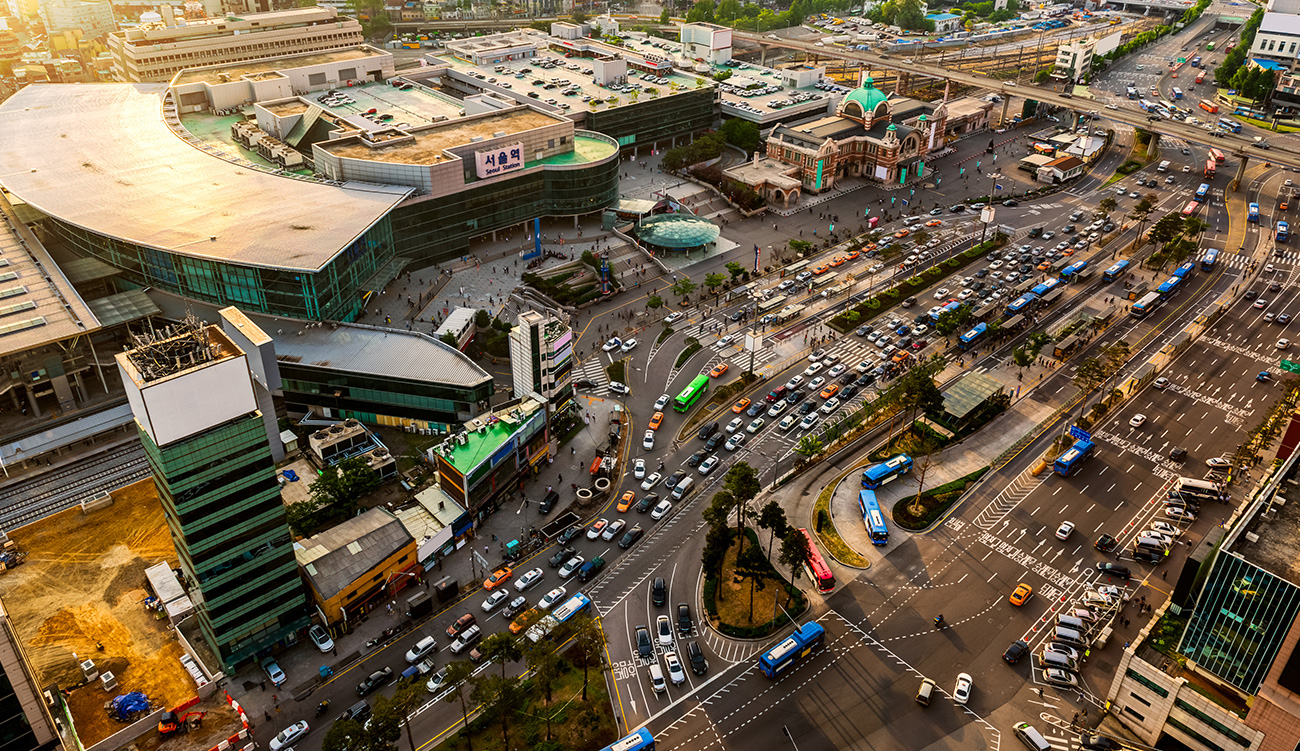 In a lot of cities, if you’re in a rush, the first instinct is to jump in your car or hail a cab. But in Seoul, most opt for the subway.

Seoul’s subways have long been recognized for being fast, clean, and communication-friendly, equipped with mobile services and Wi-Fi. This is despite servicing an estimated 7 million passengers on a daily basis and shouldering the bulk of public demand. As of 2014, subways accounted for nearly 40 percent of all means of transportation, followed by buses and cars, according to data provided by the city government. 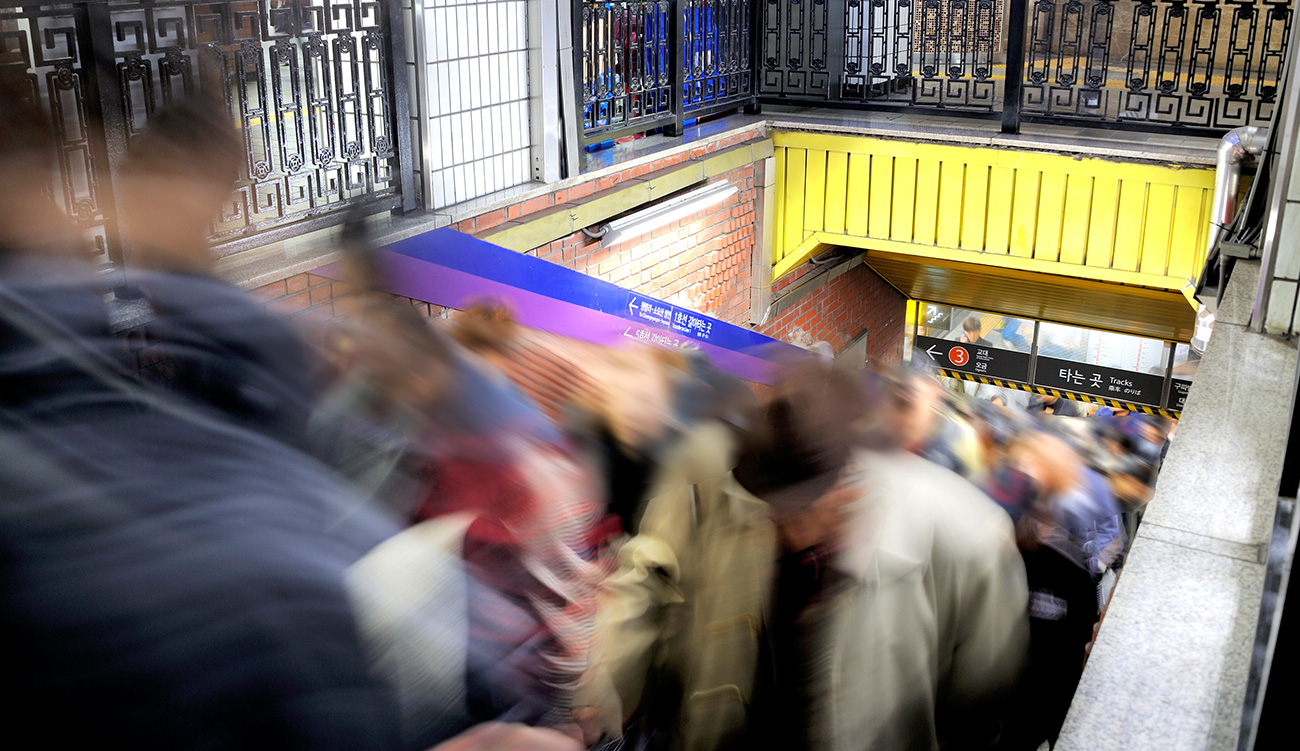 Sure, the trains get crowded during peak hours, but the metro’s reliability and affordability make it so popular that it’s commonly referred to as “the feet of Seoul’s citizens.”

But it’s not just the subway’s solid infrastructure and built-in convenience that makes it so attractive. Operators have been going the extra mile to make sure they’re responsive to the needs of their passengers. To ensure all riders have a way to directly communicate any issues that may arise on the subway, operators offer text messaging services (there are also apps from Seoul Metro and the transport ministry for this) for everything from raising or lowering the air-conditioning or heating in each car, reporting disturbances and criminal activities, and filing complaints. All Seoulites have to do is find the car ID number displayed above the doors and send a text to the listed number. 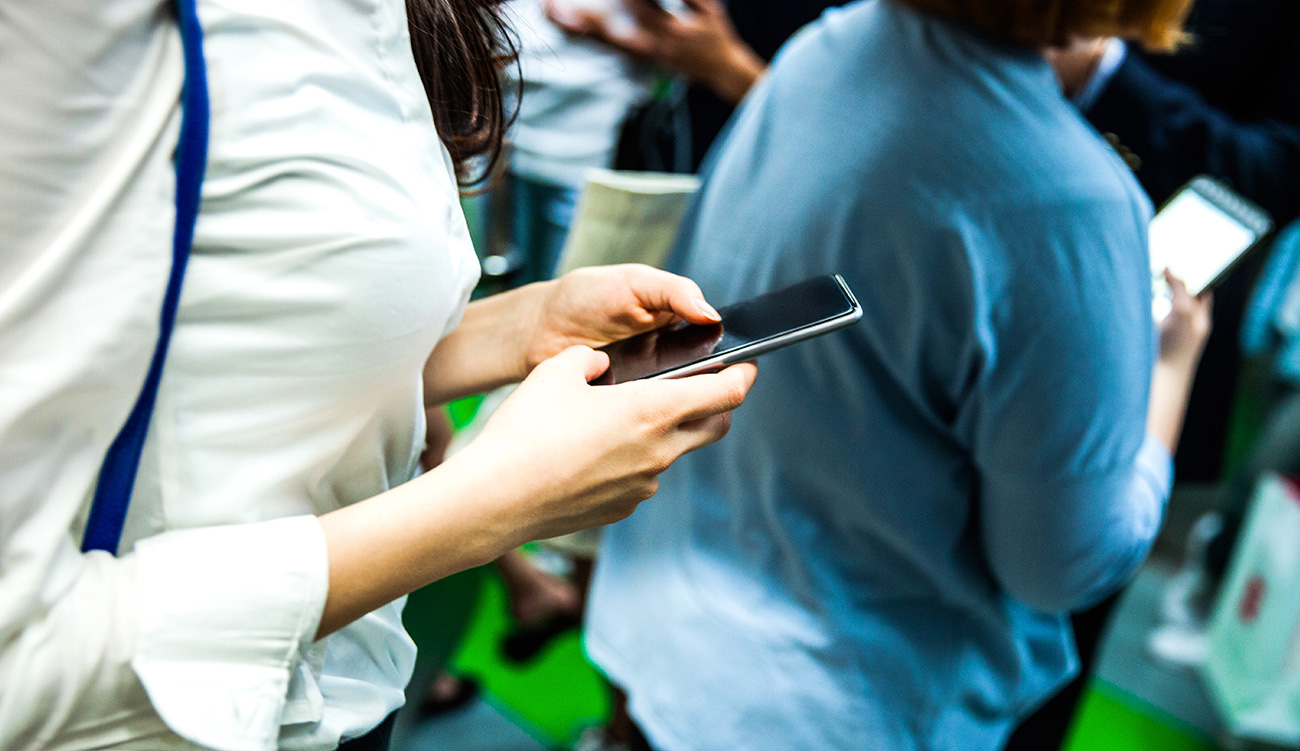 It also provides maps for other metro systems in Korea, including a version for people with color blindness.

You can also monitor train arrivals and departures in real-time and look up other information, such as the best transfer stops and which subway car lets you off closest to your transit point. 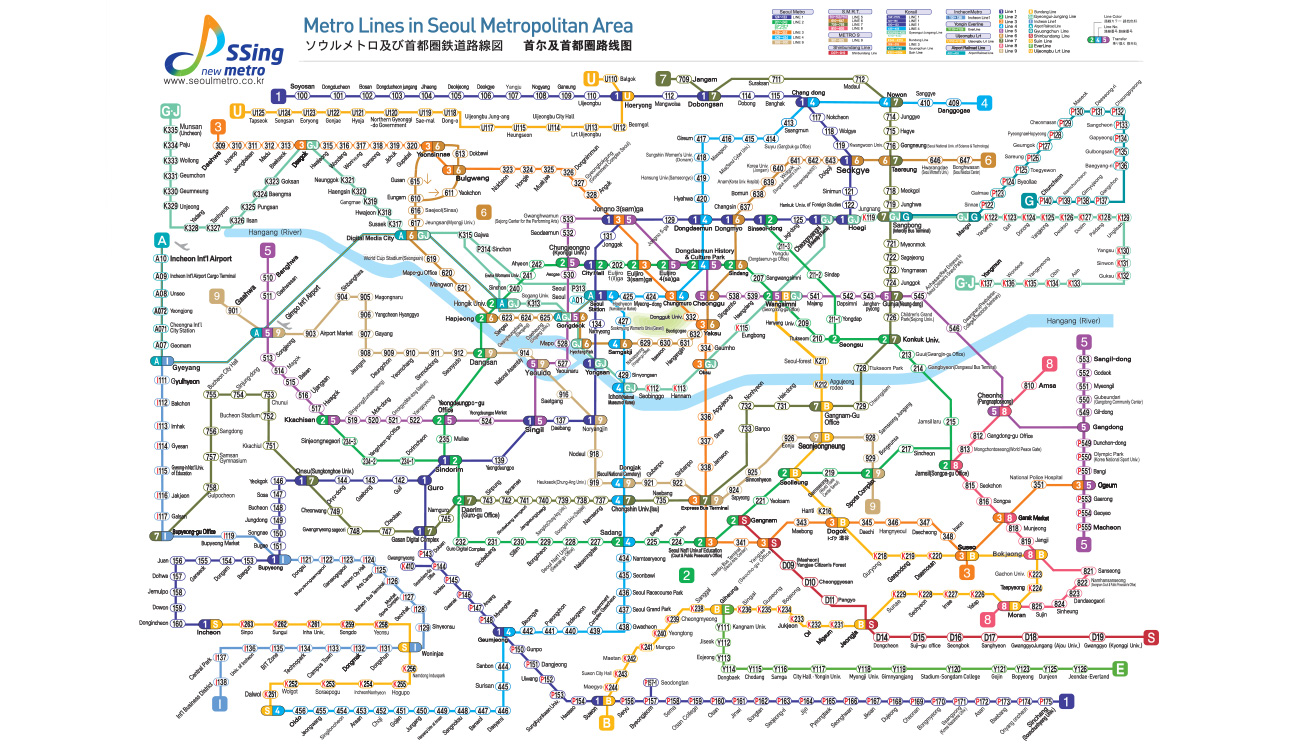 This is a comprehensive map of trains running through Seoul city.

While the Seoul Metropolitan Government oversees the operation of Line 1 to 9, some sections are managed by other entities.

You Think Buses Are Slow?

Despite all these joys that come with riding the subway, there are always people who prefer to take the bus for myriad reasons: you can enjoy the scenery, you don’t have to go down flights of stairs, and bus routes cover parts of town that are farther away from subway stations.

But what do you do when you get stuck in unbearable traffic? If cars aren’t moving, that usually means buses aren’t either. Not in Seoul. Take a closer look at the roads, and you’ll notice little islands in the middle, connecting people to buses that pass through the dedicated lanes.

The project to create these bus-only lanes began in 2004, and by 2012, most parts of the city were set up with bus lanes coated with brick-colored asphalt. Free from the sputtering flow of general traffic, buses are able to travel much more efficiently. City data show that at peak hours these lanes have helped increase travel speed by an average 28 percent. 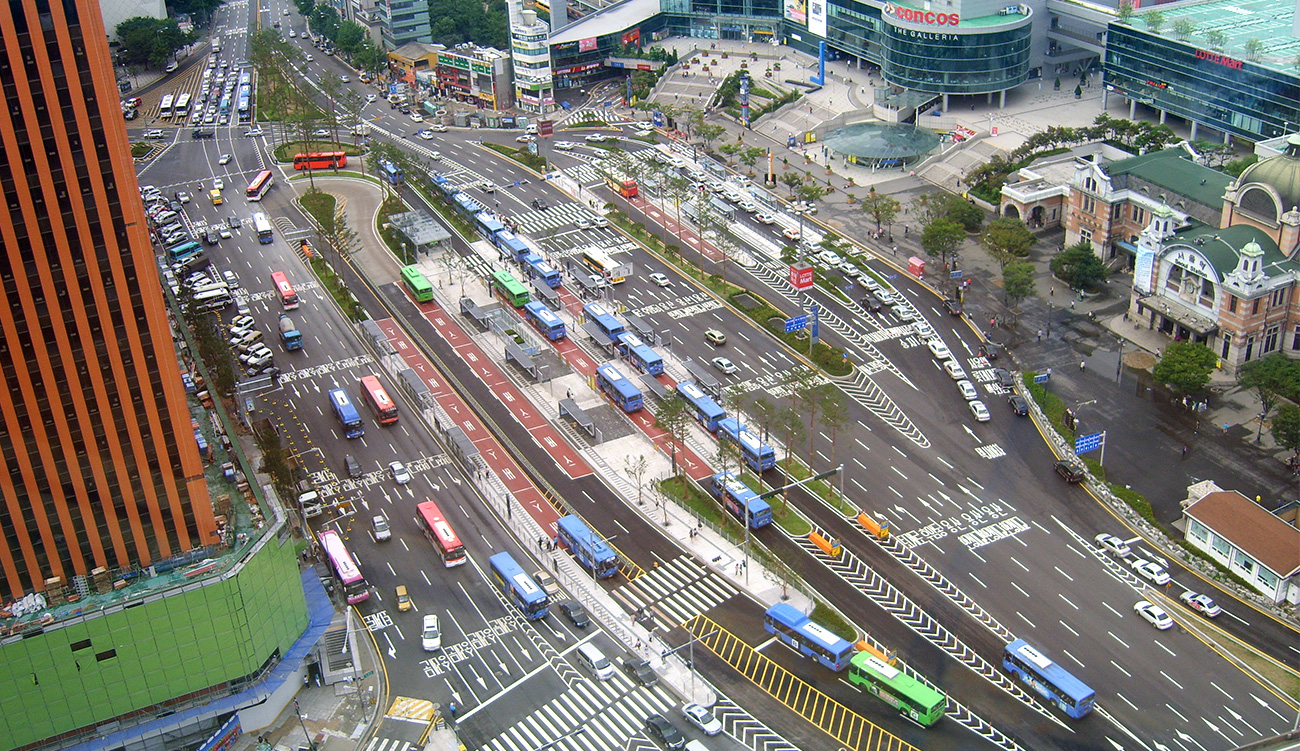 A birds-eye view of one of the busiest transit centers in Seoul, Seoul Station.

This effort toward efficiency is also seen in the evolution of payment methods for mass transit. Seoul is considered one of the frontrunners when it comes to introducing smart transportation cards, which is why you’ll rarely see anyone fumble around for change when using public transit.

Contactless smart cards are now seen in many cities around the world. Think of the Oyster in London, EZ-Link in Singapore, or the Pasmo and Suica cards in Tokyo. But one of the best things about Seoul’s payment system is that it’s now integrated into debit and credit cards from major card companies and banks.

Instead of having to carry around a separate card and top it up all the time, people can pay for their bus, subway, and taxi fares all with one card and settle the bill once a month. 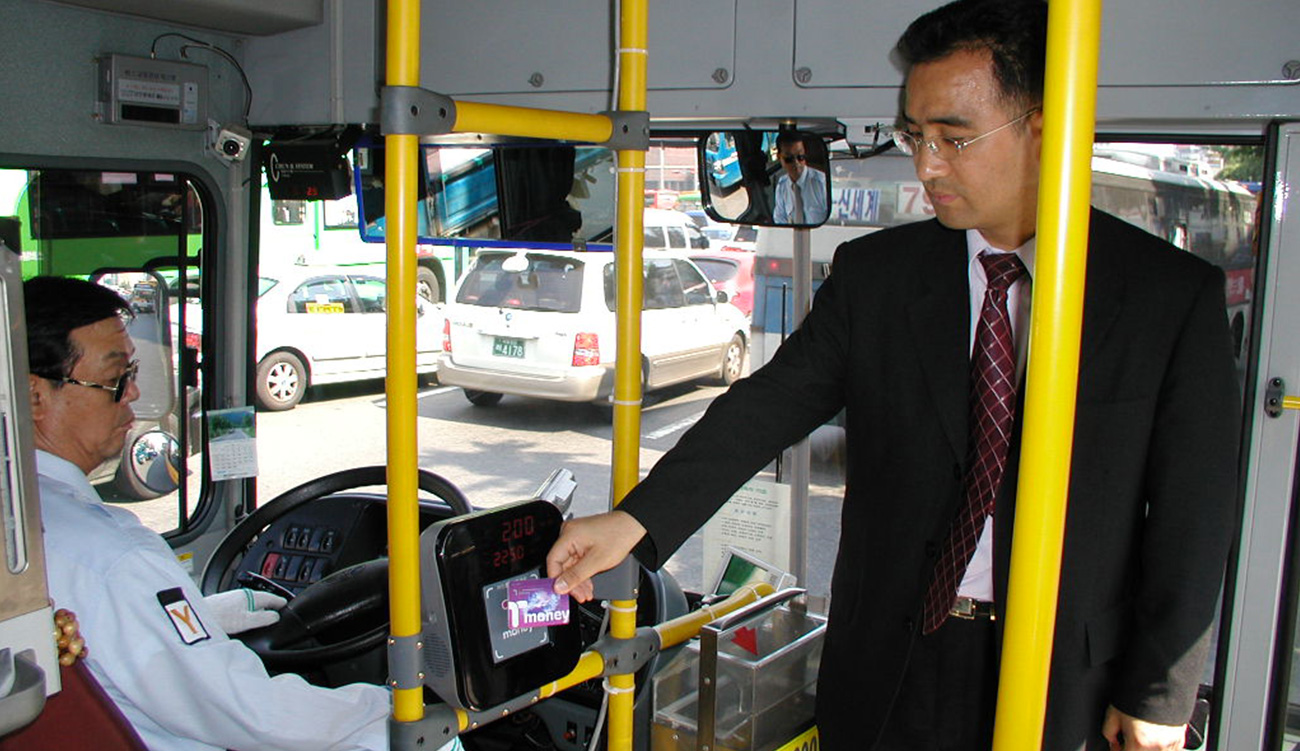 Simply tap your multi-platform public transit card when you get on and off your ride.

One of the most frustrating things about public transport is missing your ride. Anyone who has run for the subway or after a bus only to miss it by a few seconds understands how infuriating this can be.

If only you could tell where your ride was ahead of time. That option is actually available for most Seoulites. Anyone who has a smartphone can either use official apps from the metropolitan government, or private apps that use the same open source data provided by the city. All this information is also projected on digital screens installed at subway stations and virtually all bus stops, telling passengers exactly how many minutes they need to wait to catch their rides. In the case of buses, they can even see whether the next ride will be crowded, normal, or have plenty of room.

Each bus station is equipped with a Bus Information System (BIS), telling people which buses arrive next and when.

People can also look up their travel routes to get an estimated time of arrival, bus times, and more via mobile apps provided by Seoul City.

What makes all of this possible is Seoul’s Transport Operation and Information Service (TOPIS), which is considered the nerve center of the city’s public transit system.

It was established in 1998 and operates from a central control room under city hall. TOPIS has evolved over the years, drawing from big data collected by GPS devices attached to buses and taxis, more than 830 CCTVs, and over 1,100 video detection systems. A huge chunk of data also comes from the passengers. With 99 percent of people on public transportation using smart cards, TOPIS can gather data on their travel patterns at specific times and locations so the city can adjust bus routes and train schedules accordingly.

Never will you miss another ride in Seoul.

As the hub of South Korea’s political, economic, and cultural scene, Seoul has seen consistent demand for fast and efficient public transportation. Getting major builders like Samsung C&T to take part in constructing subway Line 9, the city’s first with an express train service, shows just how continual the evolution has been. By utilizing smart technology, the city has managed to create a means of transport with great adaptability – small wonder that many other cities looking to modernize or improve their public transportation systems have turned to Seoul for help.

As the city undergoes numerous transformations, it will likely see new demand in public transport in the years to come, but with a system built on the principle of adaptability, Seoul is expected to keep pace with the evolving landscape that lies ahead.