Business success depends on local communities’ support – that’s one of the most important lessons Samsung C&T has learned from 80 years of building businesses around the world. Without their help and encouragement, it would not be possible for the company to grow from a small shop in Daegu to the multinational entity that stands today.

Recognizing their contributions, Samsung C&T construction group is committed to sharing the fruits of its labor with community stakeholders. Guided by the values of building relationships and strengthening communities, the group has been giving back to diverse societal groups via different CSR activities throughout the years.

A Day in the Gardens

With the third-highest life expectancy in the world, Singapore is facing the challenges of a rapidly aging population. Like many other parts of the world, ensuring the wellbeing of its elderly population tops the agenda of the Southeast Asian city-state.

Decreasing mobility and shrinking social circle can often cause elderly people to become socially isolated, which can not only affect their psychological wellbeing but also physical health. 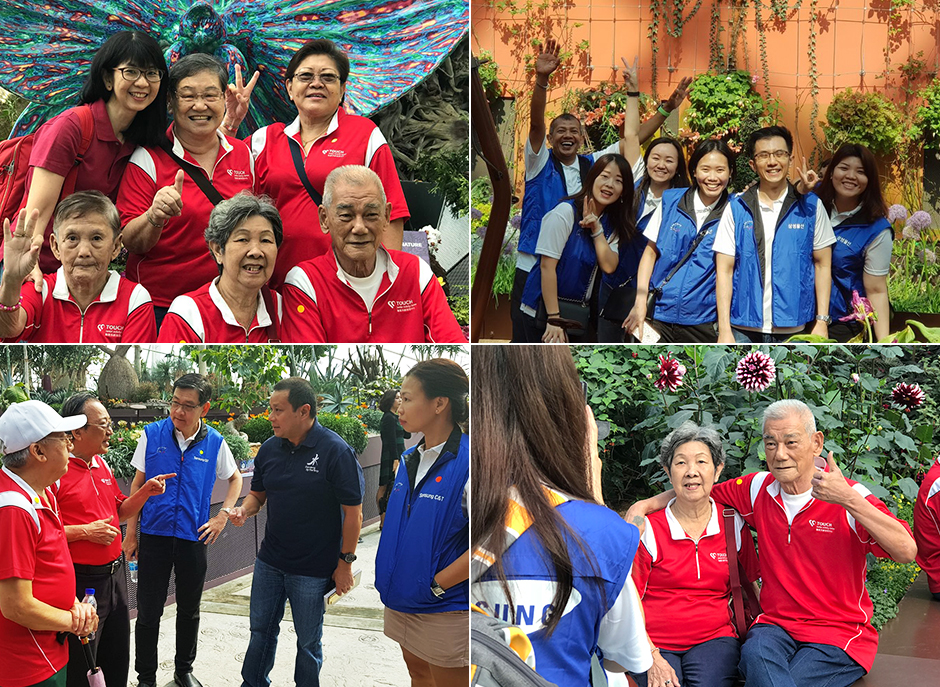 Recognizing the importance of social activities for elderly people, employees of the construction group’s Singapore office organized a one-day tour to the world-renowned Gardens by the Bay for dozens of elderlies from TOUCH’s Senior Activity Centers (TSAC). The office has been collaborating with TOUCH, one of the largest non-profit organizations in Singapore, since 2015. The one-day tour on May 11 marks the fifth collaboration between the two organizations.

During the one-day tour at the gardens, elderly participants and volunteers soaked in magnificent sceneries, creating treasured memories along the way.

“My wife and I really enjoyed the trip and had a lot of memories captured in photos with the help of the volunteers,” says participant Mohamed Bin Mohamed Salleh.

Another participant Ng Gim-meoy says her experience of reaching the top of the Cloud Forest, one of the most iconic attractions in the gardens, was good as volunteers patiently assisted her to the top.

But it’s not only the participants who gained from the one-day trip. Many volunteers from Samsung C&T say they also gained a lot.

“It was rewarding to give back to the community,” says Executive Vice President John Chang. “I met some friends who are now chatting with me online as they felt they have met a new friend. It was good to see all of them smiling all day long.”

Through decades of planning and executing construction projects around the world, Samsung C&T is committed to providing safe homes and comfortable learning environments for communities to prosper.

As part of the Samsung Village project, employees of the engineering and construction group helped build three villages from scratch and renovated schools in Vietnam and India. In Indonesia, volunteers from the group helped install sanitation facilities and water supply infrastructure for the Pasir Halang village.

The transformations brought about by these projects were immediately felt by the local community. As the principal of one of the refurbished schools in India notes, the number of dropouts declined significantly following a 14-month renovation project. Residents in Pasir Halang, meanwhile, were grateful for having clean water all year round.

As Jae-boon Shim, a CSR representative of the company stresses, the Samsung C&T Village Project is special as it highlights the value of people-centered construction.

“Each project is distinguished by the demands and needs of local residents but are tied together with the common aim to build a better future for those living in disadvantaged areas,” she adds.