the Year’s End with Warm Hearts

For Samsung C&T, the end of the year is a special time to reconnect with the community.

After an eventful year filled with groundbreaking projects, new collaborations and numerous awards, Samsung C&T came together to make valuable contributions to local communities, ensuring plenty of hope and support to ring in the new year.  As in past years, the company organized several heartwarming events in December to reach out to those in need and offer its thanks.

Since 1995, Samsung C&T has participated in the company-wide “Holiday Neighborly Love” campaign to thoughtfully show its gratitude for the past year. It is a chance for Samsung employees to connect with community members and share holiday cheer, and is one of the biggest corporate social responsibility (CSR) events the company gets involved with.

Company employees visited the Joseph Clinic, a hospital for those with limited access to proper medical care, in the Yeongdeungpo district in Seoul. Volunteers donated hundreds of care boxes, each carefully filled with Korean food staples: rice, instant noodles and various canned goods.

Several Samsung C&T employees joined the event to unload care boxes and give out winter supplies to patrons of the Joseph Clinic. Employees from several Samsung affiliates visited 6,400 homeless and emergency shelters across the nation to deliver care boxes to people living in shelters.

Other activities of the “Holiday Neighborly Love” campaign included a fundraiser for children with terminal illnesses and baking cakes and delivering daily necessities for the disabled.

Another charitable activity that Samsung C&T hosts at the end of the year is a community bazaar, featuring items donated by employees and small auctions for various goods.

The proceeds of the bazaar go towards helping low-income households, and shoppers are able to bring back home thoughtful gifts, such as clothing, cosmetics and household goods.

By having a marketplace for people to interact with each other and be able to enjoy the shopping experience, Samsung C&T created a cheerful and pleasant environment for giving and sharing.

Heartist House, a store that intertwines art and community, partnered up with Little Sun this season to celebrate the gift of light for communities that need clean and affordable energy.

Started by artist Olafur Eliasson and engineer Frederik Ottesen, Little Sun consists of a collection of solar-powered products that can provide reliable energy to the 1.1 billion people worldwide living without access to the electrical grid. 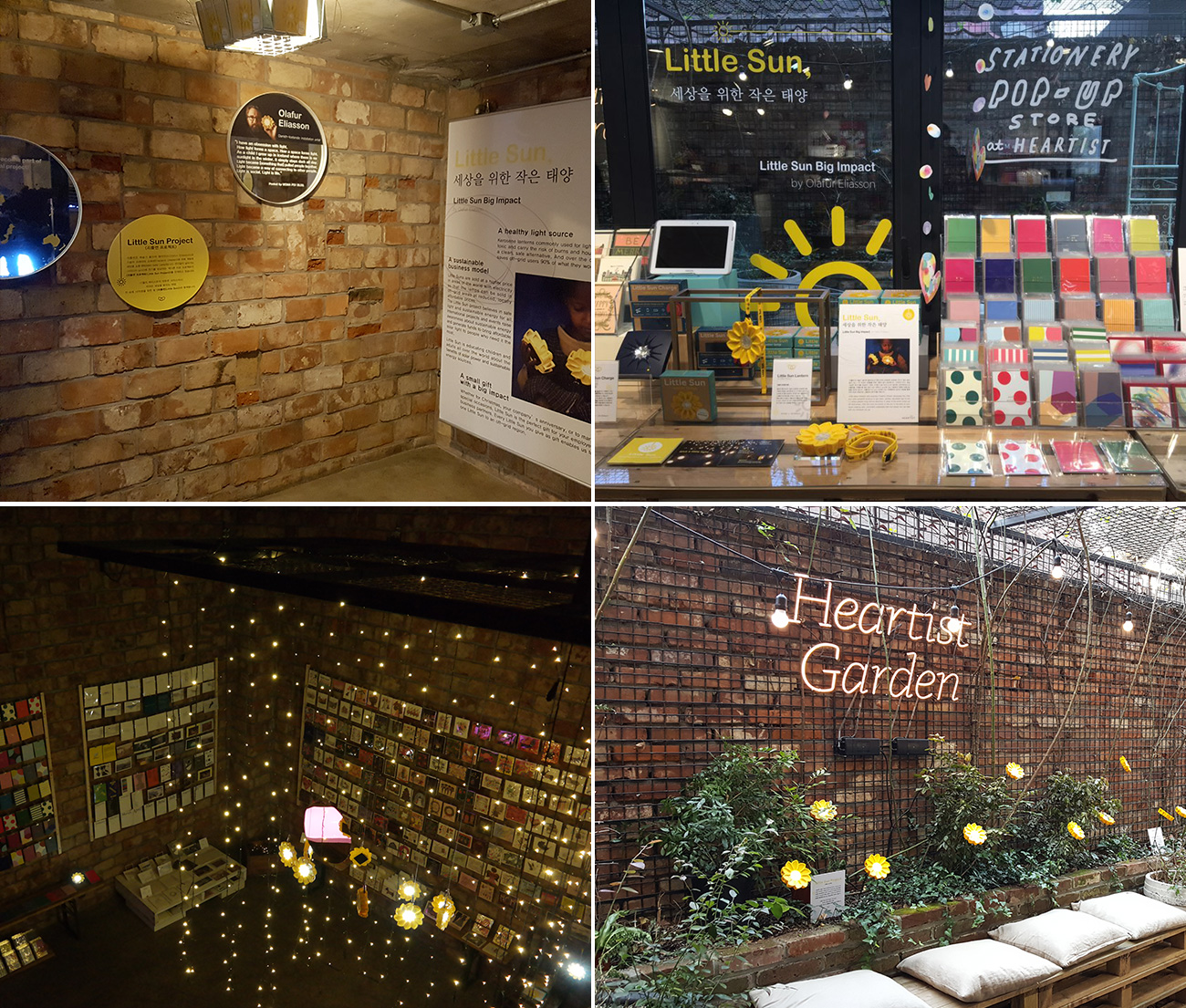 Heartist House organized a series of programs tied to Little Sun in December: a hands-on media exhibition, an intimate healing garden and a meaningful gallery filled with art from disadvantaged children.

Each project allowed visitors to learn more about clean energy, while also creatively engaging with the communities the cause supports.

For some, heat is a luxury during the winter months. With this thought in mind, Samsung C&T organized the “Love Coal” campaign in 2012 with Coal Briquettes for Neighbors in Korea, an organization dedicated to providing coal briquettes to disadvantaged families in Korea.

The social media-driven campaign has donated a total of approximately 500,000 coal briquettes to families in need of warmth since its establishment, and its efforts have continued into 2016.

This year, “Love Coal” garnered support from 5.6 million online visitors in a matter of just six days. In sharing the event on social media channels, over100,000 briquettes were distributed directly by Samsung C&T employees to 350 locations selected by the Coal Briquettes for Neighbors in Korea organization.

At the end of 2016, Samsung C&T’s Asia-Pacific Regional Office (APRO) in Singapore held a fundraising drive for senior citizens with TOUCH, a non-profit organization based in Singapore. The office has collaborated with TOUCH in the past for other CSR events, including a charity run last August to raise money for future support programs.

The drive raised almost 9 thousand USD (12,888 SGD) to aid some of TOUCH’s 2600 homebound senior citizens, and was awarded to the charity at APRO’s Employee Appreciation Night in December 2016. The donation will go towards providing the elderly with ongoing medical and nursing care, home rehabilitation services and other assistance to improve their living conditions.

Blessings for the New Year

While Samsung C&T participates in many community-bonding events throughout the year, it planned some of its best acts of giving for last. Through its holiday CSR activities, the company planned the warmest way to offer its thanks.

Here is to anticipating a great 2017, and to remembering the special moments that took place in 2016.