Samsung C&T has been listed in the Dow Jones Sustainability Indices (DJSI) World for the third consecutive year. The DJSI are a global standard for sustainability assessment and investment, evaluating a company’s economic performance as well as environmental and social aspects. Only those who are highly evaluated in each category are included in the respective indices.

The company received a commemorative certificate from the DJSI at an awards ceremony that took place on Oct. 22 at Shilla Hotel, Seoul, held jointly by the Korea Productivity Center (KPC), S&P Dow Jones, and RobecoSAM. The KPC is the DJSI’s local partner in Korea.

The 2019 World index is the DJSI’s main global index and lists just 318 firms, which were selected from the top 2,526 companies in the world. Samsung C&T was among only 19 Korea-based firms that made the cut.

Launched in 1999, the DJSI made up the first international benchmark for sustainability. Measuring Environmental, Social and Governance (ESG) factors, the indices are recognized for their global credibility in both the fields of investment and assessment. They assess the 2,500 largest global companies in terms of market capitalization and an additional 3,500 companies around the world including in the Asia-Pacific region, Korea and beyond.

The main assessment criteria of the DJSI are economic (business), social and environmental areas. For the economic part, there are nine factors including corporate governance, risk & crisis management and codes of business conduct. The indices also look over seven social areas such as human rights, talent attraction & retention and corporate citizenship & philanthropy, in addition to five environmental factors including the disclosure of environmental reporting, climate strategy and product stewardship. Other considerations are media and stakeholder analysis, assessing a corporation’s PR issues depicted by traditional and social media platforms.

As well as being listed in this year’s DJSI World index featuring the top 10 percent of companies, Samsung C&T was included in the subset Asia Pacific and Korea indices. The DJSI Asia Pacific index lists the region’s top 20 percent of 612 firms, while the Korea index features the country’s top 30 percent among 204 firms.

Samsung C&T has set a three-year blueprint for governance improvement.

In 2018, the company separated the CEO and chairman in terms of its board positions. To ensure the independence of its subcommittees, the company has recruited independent executives with diverse and professional backgrounds, including Phillippe Cochet, who previously served as chief productivity officer at General Electric. In 2019, the company has developed an assessment model for the board and subcommittees in an aim to improve the efficiency of the board of directors.

In order to enhance shareholder value, the company has also appointed shareholder advocates among the Governance Committee members and set shareholder dividends for three years between 2017-2019.

Samsung C&T has been reinforcing corporate social responsibility in business and striving to create social value by making the most of the company’s business characteristics.

The company has established a management system that adheres to the global standard, which includes a labor/human rights-related risk review, monitoring the improvements and more. The system has been adjusted to all four of its business groups – Engineering & Construction, Trading & Investment, Fashion, and Resort – as well as their subcontractors. The results of the reviews are disclosed on the annual CSR Report and more.

Since 2017, the company has been running Junior C&T Academy, a job experience and career development program for middle school students in rural areas.

“Heartist” is a fashion brand for disabled people, allowing them to have more choice in daily fashion.

Samsung C&T has been dedicated to minimizing the negative impacts of the company’s business activities on the environment.

The company has set an emission reduction goal by 2020, and has been monitoring its delivery on a quarterly basis. In 2018, the company managed to surpass its goal by 10.5%.

Moreover, the E&C Group has adopted a real-time noise and dust monitoring system using its state-of-the-art Internet of Things technology. The T&I Group has been expanding its renewable energy business in the North American market. 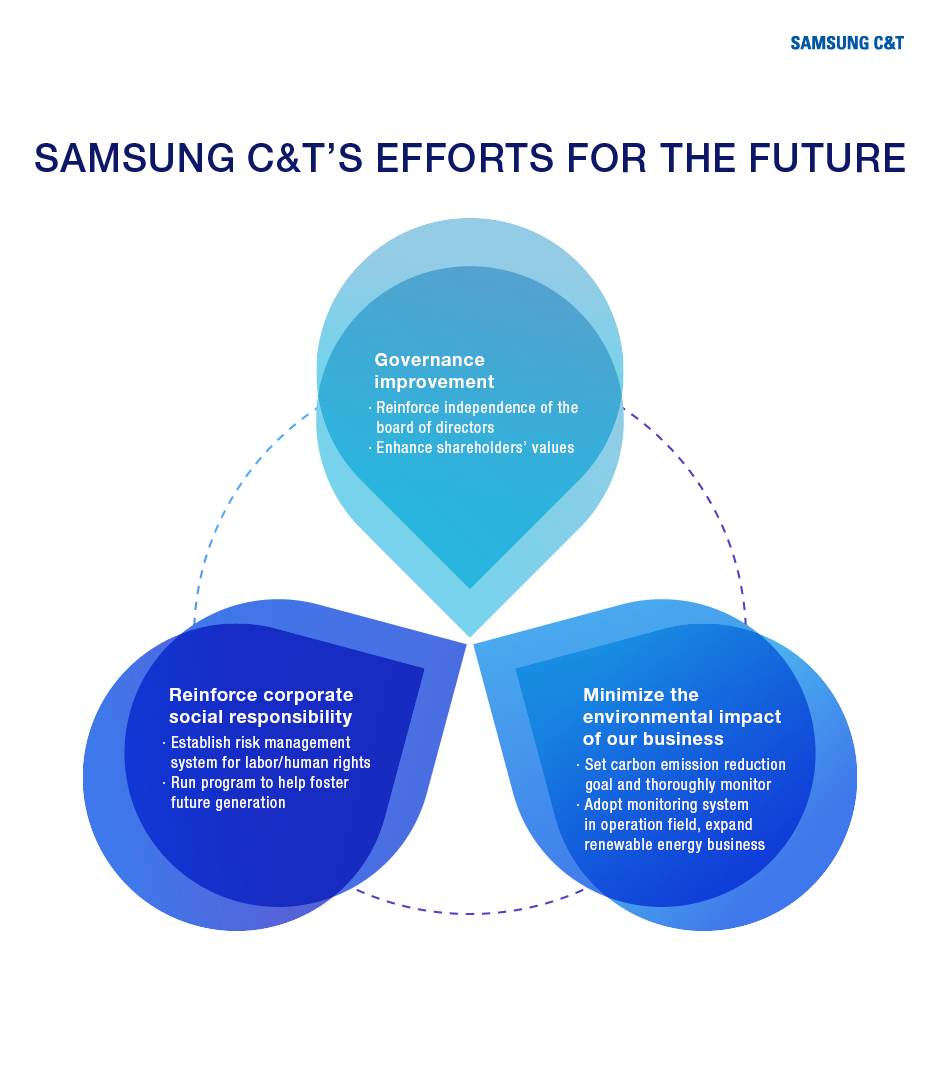 Interest in sustainable management is being further driven by the trend towards ESG investing supported by a growing number of analysts and data sets. For example, Bank of America Merrill Lynch forecast that there will be “over $20 trillion of asset growth in ESG funds over the next two decades.” The Financial Times also reported that 34 percent of sustainable European funds made it into the top quartile of their category during the first half of this year, and nearly two-thirds of them performed above average.

Along with its DJSI recognition, Samsung C&T’s ESG profile has been further boosted with its inclusion in the top 100 firms comprising the 2019 Diversity & Inclusion Index presented by Refinitiv, a renowned data provider part-owned by Thomson Reuters.

Passion & Expertise: The project manager leading through dedication and knowhow