Samsung C&T has joined the world’s largest companies on the 2018 Fortune Global 500 list for the second consecutive year. With annual revenues of $25.9 billion, reflecting a 7% growth rate, the company came in at #458 on the list.

The prestigious ranking cements Samsung C&T as a global business leader and lifestyle innovator through the Engineering and Construction, Trading and Investment, Fashion, and Resort groups that make up its business portfolio. But just what does being a Fortune Global 500 company mean?

Compiled and maintained by Fortune magazine, the 2018 Fortune Global 500 2018 was released in July, ranking both private and public companies by the revenue of their most recent fiscal year.

Samsung C&T is listed on the Fortune Global 500 with two other Samsung affiliates: Samsung Electronics (#12) and Samsung Life Insurance (#421). Along with its compatriots, Samsung C&T shares the list with some of the world’s best-known brands in its business sectors including Nike, Mitsubishi, and Vinci.

Samsung C&T has steadily increased its earnings ratio and is continuing to run profitable businesses, making them attractive for investors. Last year, it saw a 511.8% annual profit increase, generating $566 million in operating profit.

Samsung C&T’s place on the Fortune Global 500 is owed to a successful 2017 fiscal year, a trend that has continued in 2018 with a strong showing in its most recent earnings report.

On July 25 the company posted a record-high KRW 378 billion in operating profit for its second quarter report, marking a highly successful first half of 2018. Consolidated revenue marked an 8% year-on-year growth, while operating profits improved 51% during the same period and led to a net profit of KRW 343 billion, up 212% from 2Q 2017. 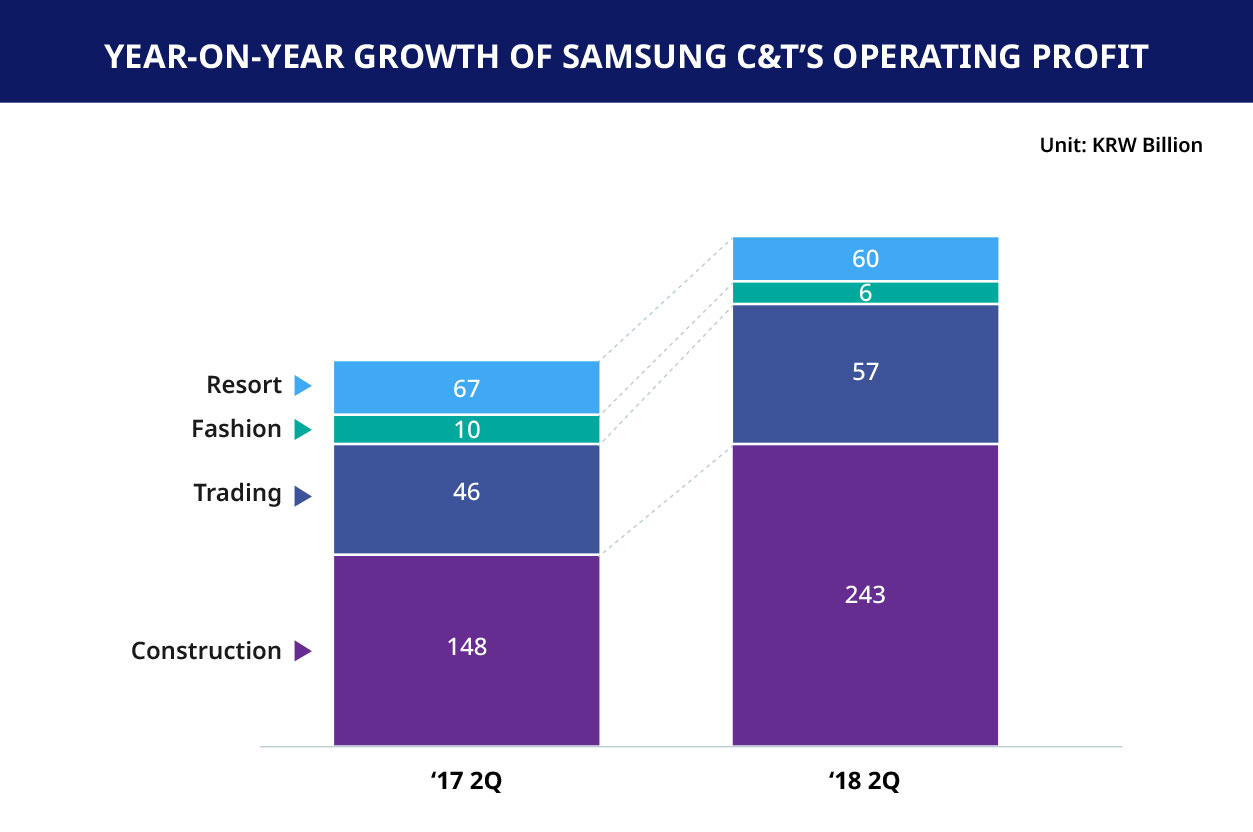 This growth trend has continued in large part due to improved profitability in the construction businesses, both domestically and abroad, as well as an increase in trade volumes and increased commodity prices.

Samsung C&T has come a long way since its foundation in 1938. With KRW 49.05 trillion in assets and 9,422 employees across its global network, continued growth and enhancing relationships are major targets for the company’s future.

In its letter to shareholders at the beginning of 2018, the company announced that it would spend the year focusing on generating stable profit while solidifying their basis for growth. Supported by its record-breaking second quarter performance, Samsung C&T is well on its way to accomplishing those goals and believes the company will see continued success.

The growth comes at a particularly beneficial period for shareholders as earlier this year the company announced a three year forward dividend policy through 2019 that increased dividends per share to KRW 2,000, up from KRW 550, to enhance shareholder value.

Meet the Heroes: A Day in the Life of a Caribbean Bay Lifeguard

Local Fashion, International Scale: What Does It Mean To Win sfdf?