Part 1: Going Beyond the Horizon

Note: What makes Samsung C&T so successful? A diverse team of talented people. In the first of a three part series, we look at the dedicated individuals behind some of our most promising projects.

Every great company knows it can only be as great as the people it employs. That’s why every year Samsung C&T’s Trading & Investment Group holds the New Culture Awards to take time out to recognize outstanding employees that have gone above and beyond to contribute to the company.

The awards have been a tradition since 2006 to highlight Samsung’s exemplary employee culture. Staff members, along with a Human Resources Committee, nominate and select the winners. Categories include customer satisfaction, creativity and innovation, challenge and pioneering, and love and cooperation. 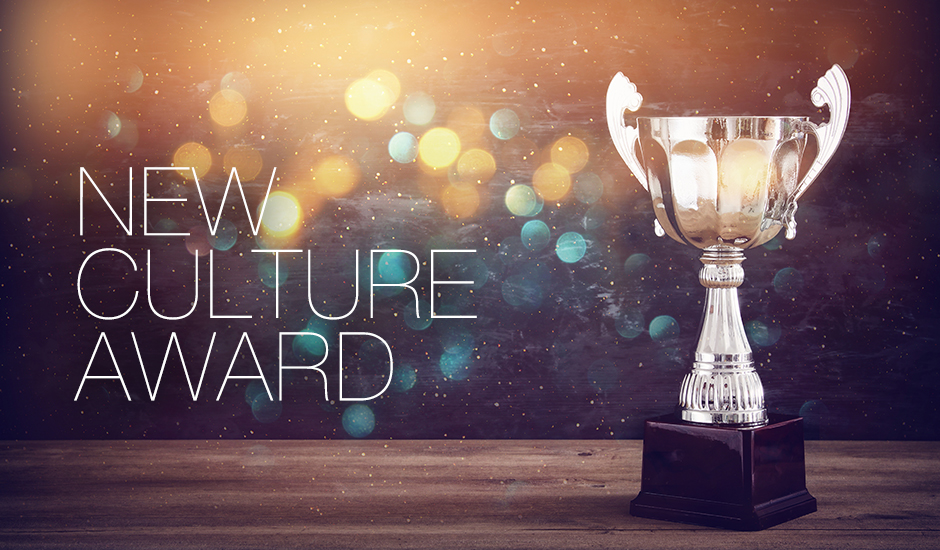 Determined to Close the Deal 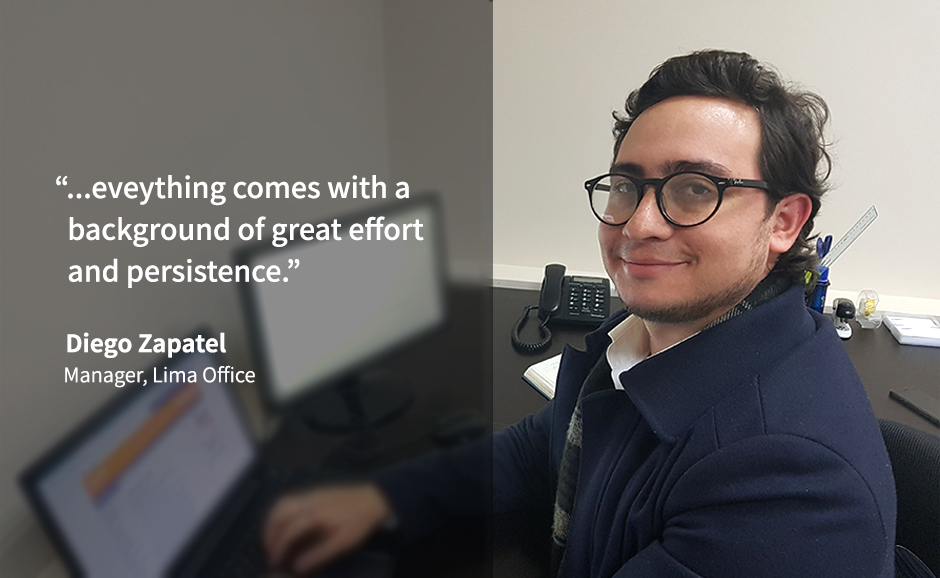 Humble in his approach, Diego Zapatel has earned a reputation as one of the most competitive salesmen in the company. Based out of Lima, Peru, Zapatel is at the heart of a team whose efforts in the Peruvian steel industry led to an incredible increase in market share in 2017.

He said the key to achieving that success is to stay honest. “I try my best to keep my word, I’m open and honest with both customers and colleagues and I think this goes through, builds trust and helps create healthy relationships,” said Zapatel. “There is no secret technique or formula, just doing right by the people that support you is all it takes to create long-standing partners.”

It’s precisely that honest approach, coupled with long-term vision and determination to deliver results that helped Zapatel’s team overcome a rough 2015 when the Lima office struggled to meet its sales goals. Rather than stressing out over shortcomings, Zapatel explains that it was important to see the forest for the trees and focus on building a solid foundation for the years to come. Staying determined to achieve his goals over time is what leads to his success.

“I cannot point out a single achievement that stands out – it has been a continuous process of incremental achievements thanks to a great team effort, support, and hard work,” he said. “Nothing was gained suddenly, and everything achieved comes with a background of great effort and persistence.”

Dedication is in the Details 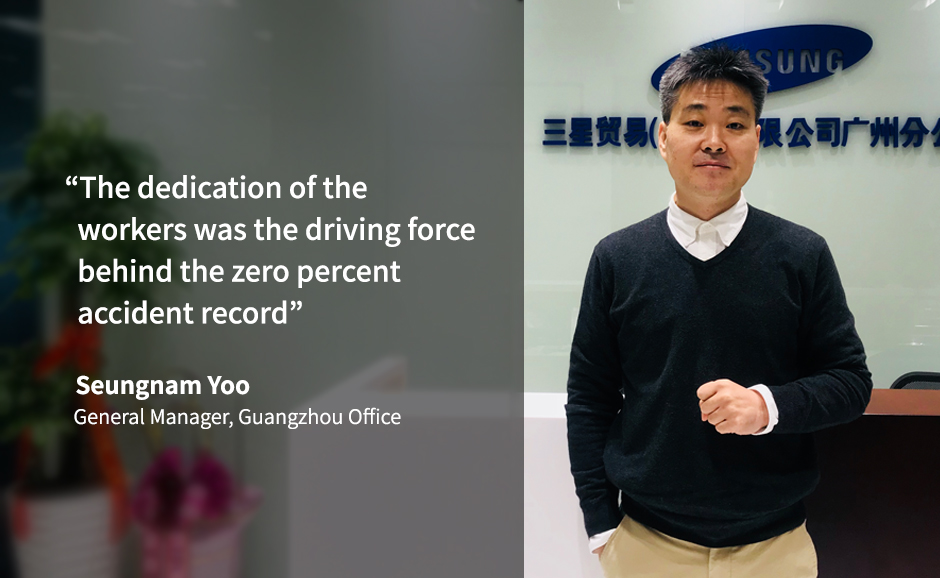 Another winner of the New Culture Award is Seungnam Yoo, who has been with Samsung C&T since 2007 where he joined to Guangzhou Office in China to expand the company’s LED trading business. As a Korean who moved to China for work, he never imagined staying there for more than a decade, but his ability to seize new opportunities has made him an invaluable asset as he spearheaded Samsung C&T’s mobile recycling business in the region.

As a brand-new business, mobile recycling was a difficult endeavor. Yoo managed to establish local processing plants by securing facilities and creating waste disposal plans in a very short time.  With no case studies or benchmarking to reference, Yoo had to grind through trial and error with only instinct and personal experience to guide him.

“Maintaining security is important and one of the difficulties was managing people and making sure we caught our errors, so we could correct them,” says Yoo. “For example, one day a new worker accidentally dropped the wrong part into a waste box during the night shift. Nobody noticed, and if the waste box went outside, it could have stopped the entire operation until we found that one small part. Thankfully security personnel caught the mistake during their inspection of the waste box.”

That dedication to procedure and security also earned Yoo a record of zero safety issues or security breaches. That record took attention to detail and forward thinking to achieve. From installing security sensors to ensuring that workers followed guidelines to reduce errors, Yoo made sure to think of all the possibilities. Still, he credits his workers with his success. “The dedication of the workers, the managers and the security personnel were the driving force behind the zero percent accident record,” he said. 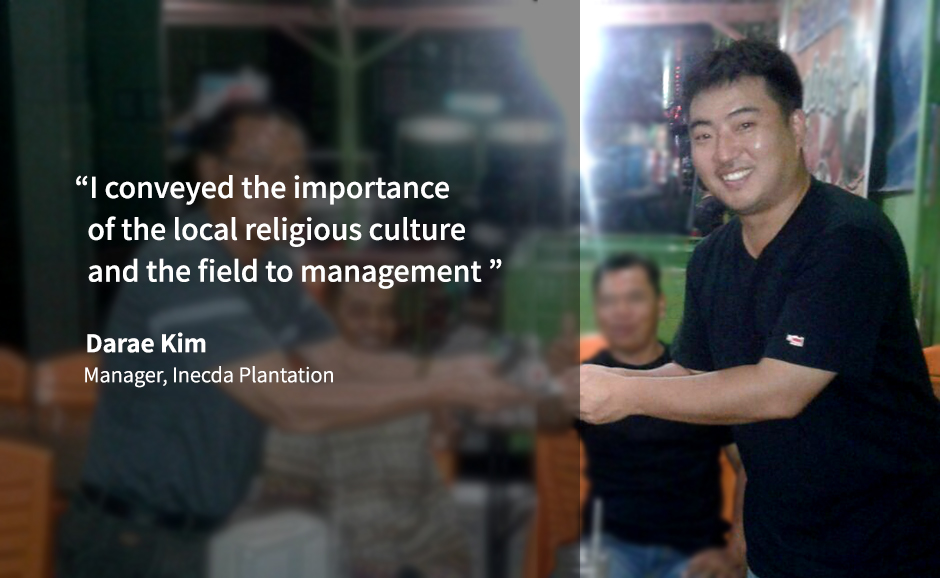 Darae Kim, based out of Sumatra, Indonesia, is the Estate Manager of the Inecda plantation operated by SNG, a subsidiary of Samsung C&T. Kim’s unique upbringing makes him a perfect fit for the position. When he was just six months old, his father was a logging manager in the Indonesian jungle and he grew up watching the area develop.

“Since I have such experience, I know the difficulties of the field, and I don’t feel any difficulties in daily life,” he said.

The plantation he manages now constitutes 45.36km2 with 498 employees that harvest crude palm oil. The biggest challenge he faces is making sure the lines of communication between the workers and management are open and clear.

“Without a basic knowledge of the field, it is difficult to convey the problems or requirements to the management correctly,” said Kim.” It took a long time to give training to the workers in the field in accordance with Korean standards of business, and at the same time, I conveyed the importance of the local religious culture and the field to management.”

His integrity of communication has earned him high praise from both the field workers and management and allowed him to increase the efficiency of the plantation. When he first became field manager, there were no fruit management systems in place in the plantation. Thanks to his keen eye for detail, and coordination of the field workers, he helped implement a quality control system and reduced the frequency of failures to meet export standards.

As Samsung C&T celebrates the New Culture Awards, Zapatel, Yoo, and Kim are reminder of the important of communication, ingenuity, and integrity in dealing with both  clients and fellow employees. These characteristics are important both at home and abroad as Samsung C&T strives to promote a global community with its members around the world.