When virtual reality gaming first launched with the Oculus Rift, many people thought that the giant goggles and hand waving were a gimmick destined for failure. But while first generation VR technology hardware has yet to reach mainstream popularity, high-tech gaming is stronger than ever. The number of VR users on Valve’s game platform Steam, for example, are at their highest point in the company’s history.

Samsung C&T is embracing that trend by bringing cutting-edge technology to the Everland theme park. The latest addition is Shooting Ghost, an all-new 3D shooting game that is creating a buzz among visitors to the park.

Shooting up in Popularity 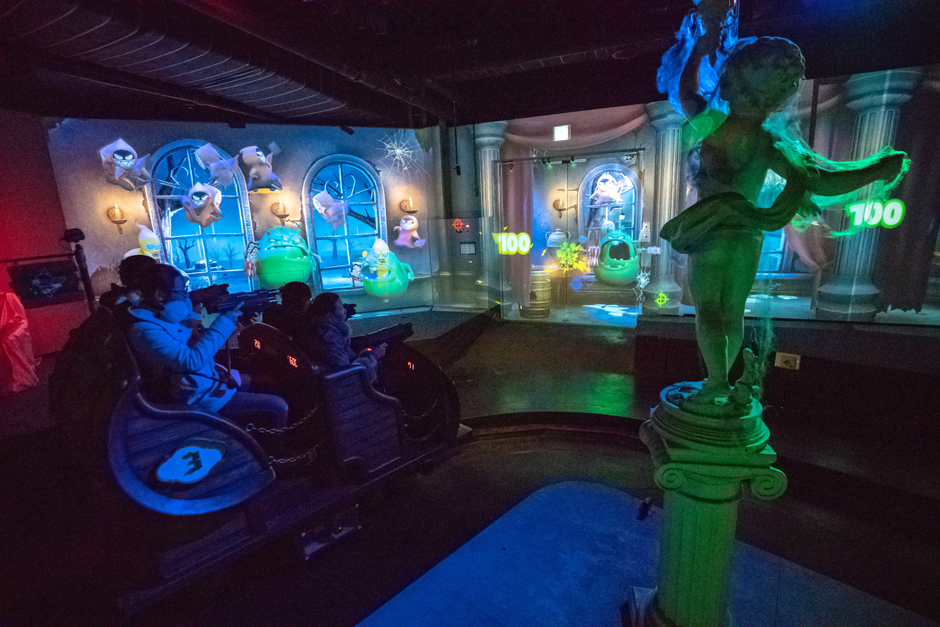 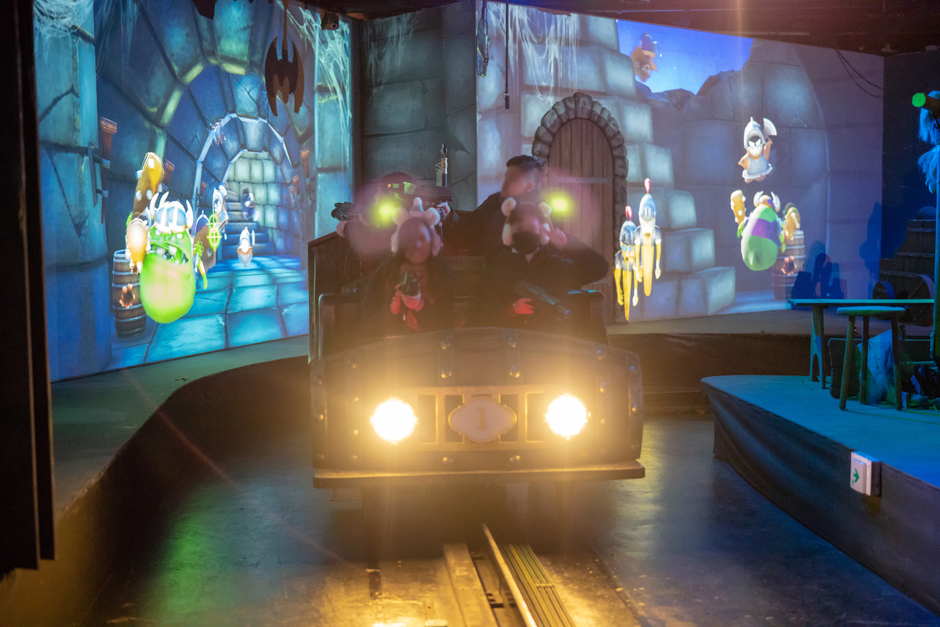 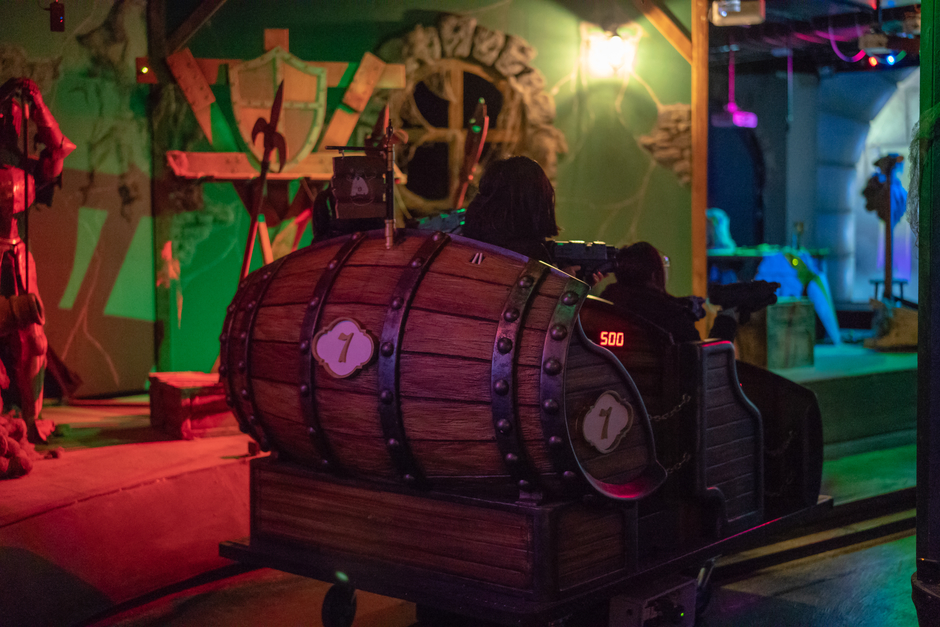 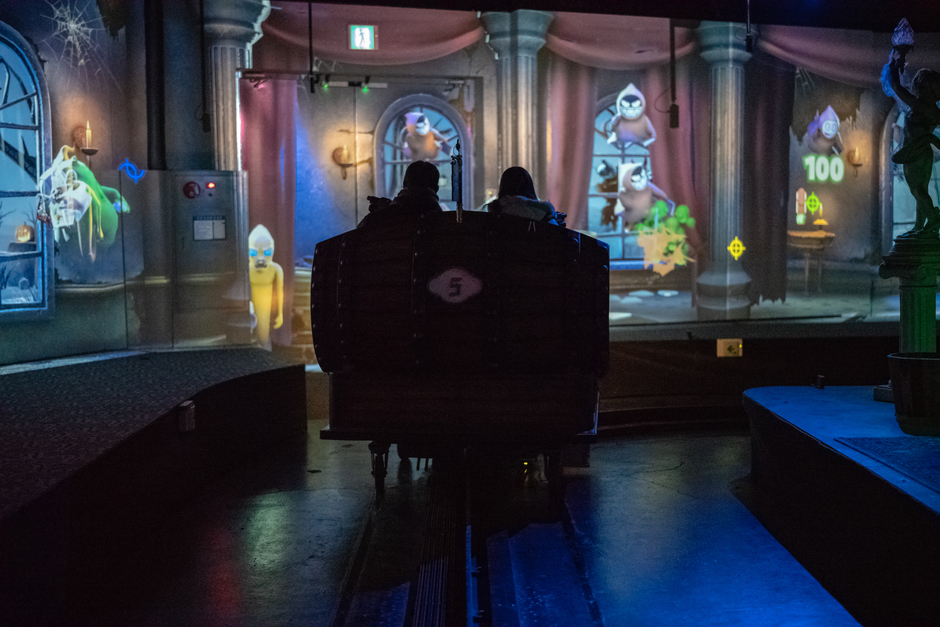 Shooting Ghost arms visitors with a toy gun as they board a four-passenger car that travels through a virtual haunted castle. When ghosts appear on the screens throughout the ride, they take aim and shoot them, scoring points for each ghost they are able to neutralize.

The ride is particularly popular among families visiting with children as they can track and compare scores in real time. A growing number of visitors coming to experience the popular ride, driving its satisfaction scores to 91/100, almost on par with Everland’s most famous ride, the T-Express roller coaster.

The new game came to Everland as park planners were looking to revamp the Mystery Mansion ride into something more modern.

“The idea of the park planning team was to create a 3D shooting game utilizing virtual or augmented reality,” said Tae-hyun Park, head of the park planning team at Samsung C&T’s Resort Division. “But they had a hard time finding technology that allowed multiple people to experience VR games at the same time. We visited multiple theme parks all over the world as well as prestigious VR companies, but we consistently found problems. VR games that allowed many people to play were less accurate, and those with high precision could only be played by a 1 or 2 people at a time.” 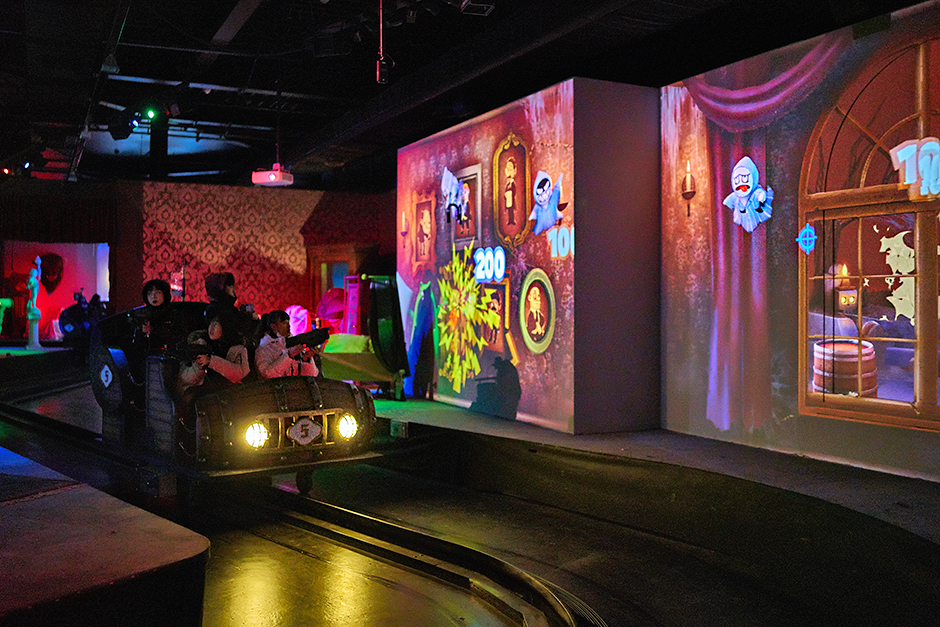 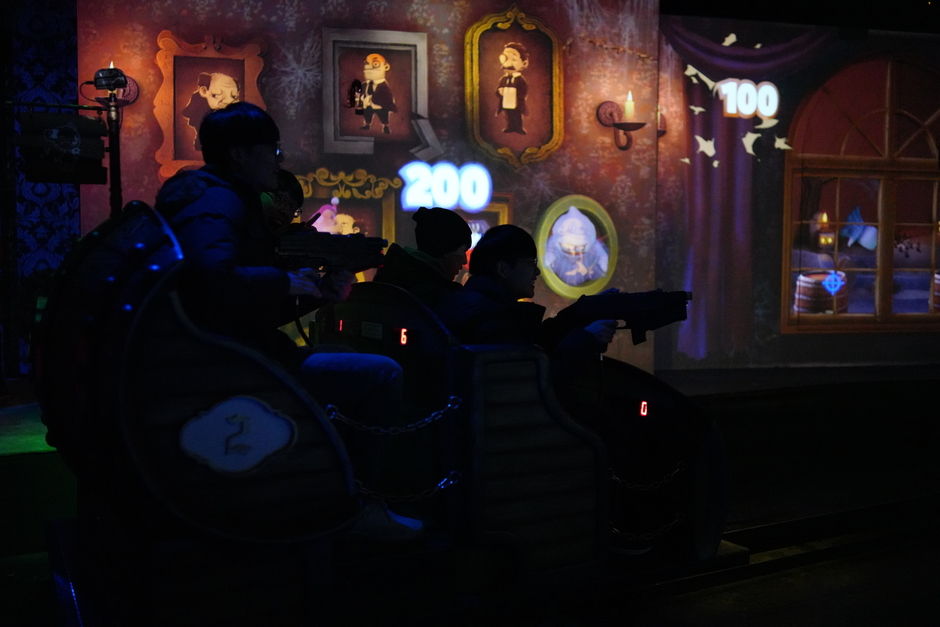 With no solution in sight, the park planning team was almost ready to give up. Then they came across EntoSoft, a domestic technology company working on a high-tech dream of their own.

A Match Made in Virtual Reality

EntoSoft and Everland were an unlikely marriage. Originally, the technology company was working on creating a method of controlling computers with hand gestures, much like the sci-fi technology seen in the movie ‘The Minority Report’.

Little did they know the location tracking technology they were developing for a holographic computer was the perfect foundation for Everland’s 3D shooting game. When the park planners saw what EntoSoft’s technology could do, they immediately pitched their 3D shooting game to the CEO and development was soon underway.

To accurately measure the location of multiple game players at once, EntoSoft developed a new type of algorithm that measures distance using intermittent radio waves.

“It’s possible to trace more than 100 objects at the same time from 100 meters away within a 1cm margin of error,” said Park Young-bong, CEO of EntoSoft. 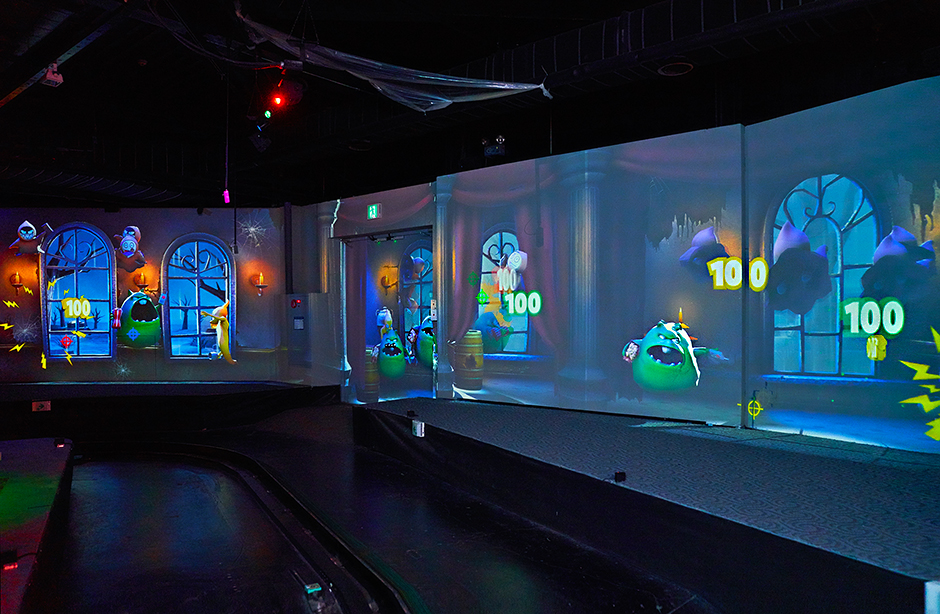 Samsung C&T then contracted Sanghwa, a Korean VR technology firm, to design the ghosts and background images for the ride. Shooting Ghost made its debut on July 19th, 2018. Thanks to the partnerships, Samsung C&T reduced the ride development costs by 75%. The VR technology of Shooting Ghost will be patented, and the company is looking for opportunities to export it to theme parks all over the world.

But Shooting Ghost isn’t the only ride leveraging VR technology at Everland.

Shooting Ghost is just the most recent in a string of high-tech theme park rides opened in partnership with Sanghwa at Everland in the last two years. 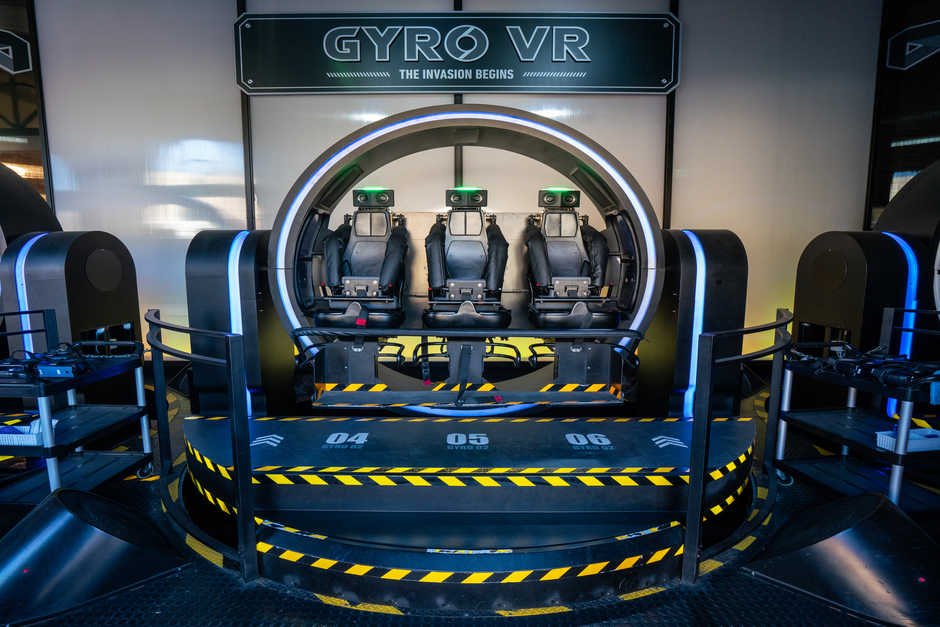 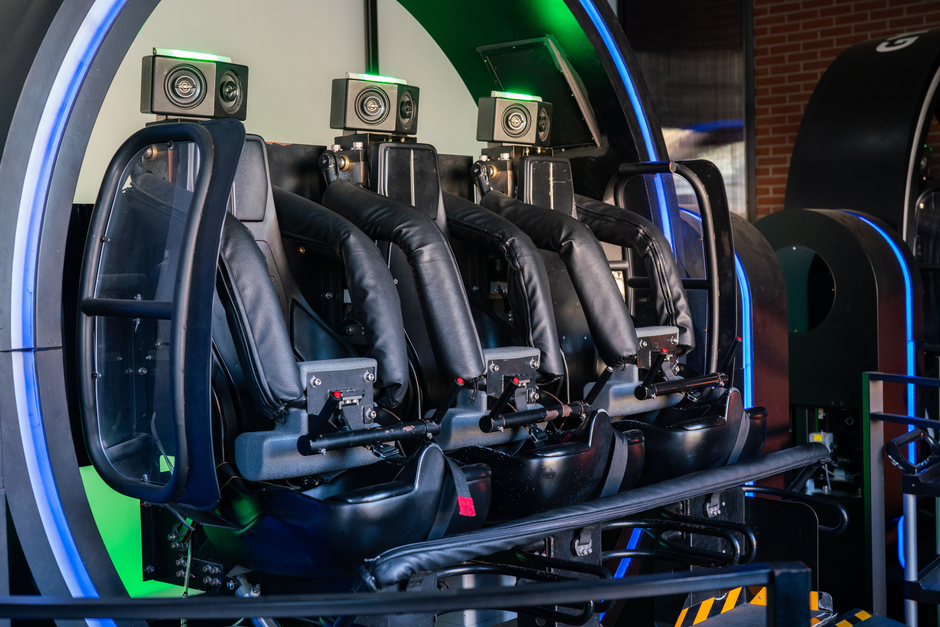 Gyro VR is one such innovation opened at the park, combining the power of the Samsung Gear VR headset with a 360-degree spinning rig. The ride puts passengers into the role of space pilots in a battle against aliens. As they dip through narrow valleys and dodge giant spaceships, the rig spins to follow the action creating an immersive VR experience. The ride gained worldwide recognition when it launched, cementing Everland as a leader of theme park entertainment. 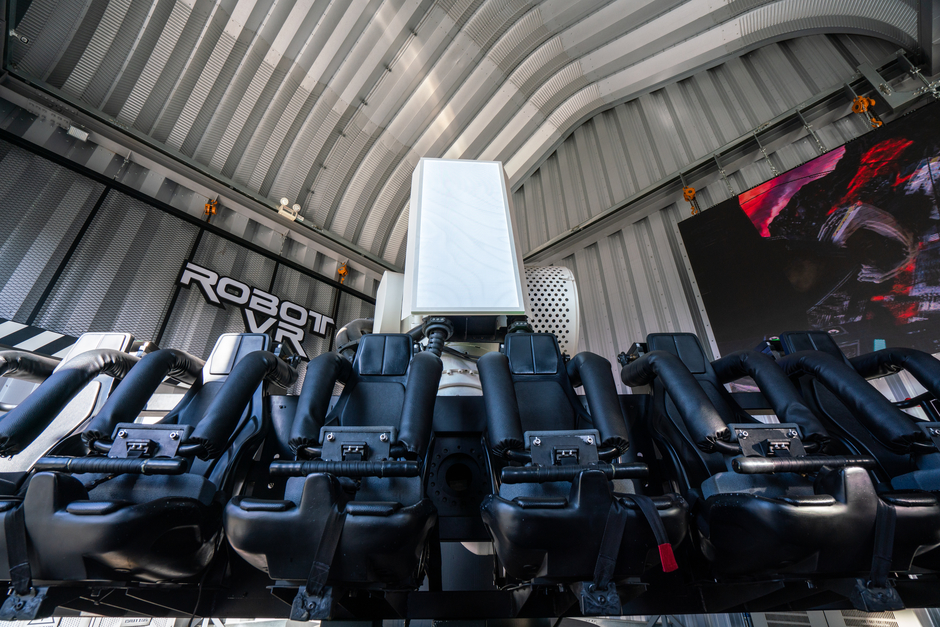 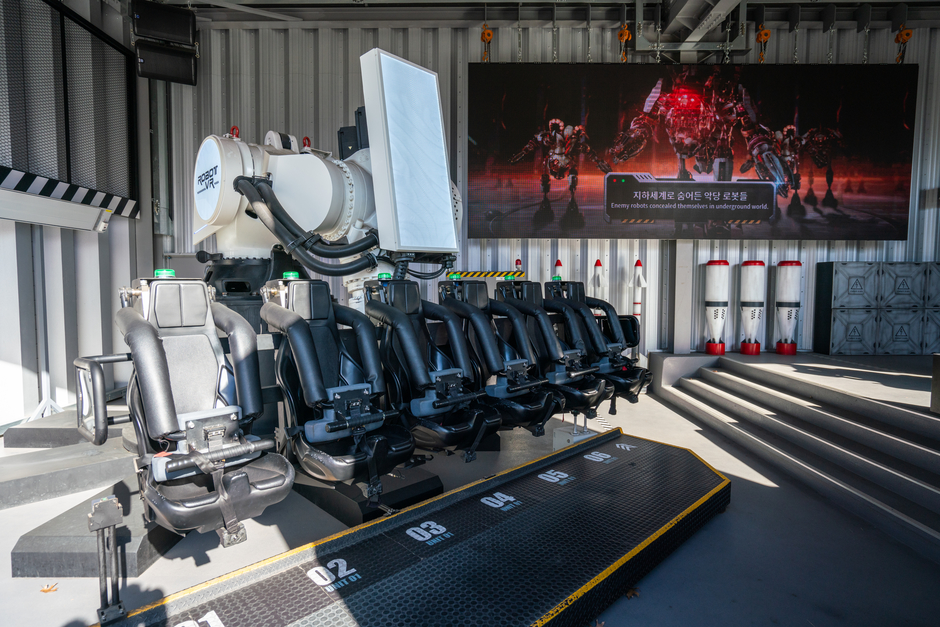 Opened in early 2017, Robot VR is another of Everland’s cutting-edge rides. Visitors are strapped into a mechanical arm and are transported into a futuristic world as pilots of a giant robot that they must guide through various obstacles. The ride saw over 100,000 visitors in the first six months of opening.

With successes like these, and the high satisfaction ratings of Shooting Ghost, VR and technology-infused rides have opened new potential for Everland. As Samsung C&T looks to invest further into VR and AR-related innovations, and export rides to global audiences, the possibilities for even more advanced theme park experiences is endless.

Stars on the Rise: Looking Back at a year in Fashion for Two SFDF Winners