The Technology Behind Seoul’s Landmark

In downtown Seoul, few structures demand the respect and admiration that the Samsung C&T built Dongdaemun Design Plaza (DDP) does. The groundbreaking design by famed architect Zaha Hadid – the first woman to win the Pritzker Architecture Prize – together with the imagination of Samsung C&T, helped transform an old baseball diamond into a modern fashion hub and international tourist destination.

The building itself, which opened on March 21, 2014, sports an unusual ‘UFO’ shape with a futuristic curvature, yet easily manages to pull off the look with elegance and grace. However, taking the vision of the prominent architect and turning that vision into reality was especially difficult in the case of the DDP, as the company was asked to do something that had never been done before.

Let’s take a closer look at how this design was brought to life.

Designing in 3D with BIM

The use of computer software to aid modern construction is evolving rapidly, and Samsung C&T is on board. But at the time of the DDP’s construction, Building Information Modeling, or BIM, was not as ubiquitous as it is today. For Korea, the DDP was the first case where BIM was used throughout the entire building process, from excavation and construction to finishing the interior and putting the final touches on the landscape. Simply put, the amorphous design of the DDP was impossible with traditional 2D approaches to construction.

The efficient 3D design process utilizing BIM enabled the construction of the DDP to finish in record time, taking just over 4 and one-half years to reach completion. However, it was not only the BIM modeling that enabled this torrid construction pace – the Construction group invented its own panel construction technique, which shaved an approximate 16 years off the construction period. Let’s take a closer look.

Where Design and Construction Meet Innovation

The DDP’s amorphous exterior panel design is the world’s largest of its kind, featuring some 45,133 aluminum panels, all in different shapes, sizes and various degrees of curvature. With the technology that existed at the time, making these 45,000 panels would have taken up to 20 years!

Samsung C&T travelled the world to meet with leading panel manufacturing companies to find a solution, but came up empty. The company decided that the only way to move forward and meet their aggressive timeline, was to develop an entirely new building method themselves.

Unexpectedly, the company stumbled across the solution while visiting a research institute in China, which was experimenting with a press machine to produce the rounded parts of a ship’s bow. After negotiating with the Chinese research team to secure the necessary transfers of technology, it was time to custom-build its own multi-point molding press machine, or MPSF, which was used to craft the curvaceous panels.

First, the exact shape of each panel was designed in 3D with BIM, and based on these calculations, the MPSF forged the panels as per spec. This machine allowed for the manufacturing of all 45,000 panels to be finished in just 1 year and 8 months.

Second, after the machine pressed the panels, the company still had to develop yet another new method for the secondary refinements of punching and cutting the panels. To solve this, the company introduced a multi-joint robot with a laser cutter, similar to those used in automobile manufacturing, to get the job done.

Finally, the process was completed after fixing each panel in place to prevent it from springing back to its original shape because of its natural elasticity. Each panel received a unique serial number to ensure they got attached in the correct position according to the BIM design. It took approximately 19 months to attach the 45,000 plus panels of the DDP structure.

By combining BIM, inventing a new MPSF machine, and employing a multi-joint robot with a laser cutting, Samsung C&T overcame a seemingly impossible task to get the job done in record time.

In order to create the unique atmosphere of the DDP, various shapes of exposed amorphous concrete were introduced both internally and externally. Hadid’s bold designs made constructing ‘simple’ molds a difficult task in and of itself.

To meet the demands of the design, round-shaped molds that looks like ribs were implemented with plywood and steel bars. The molds came to be known as the “rib mold”. This technique was what enabled the DDP’s exterior to take its unique form of exposed, curved concrete.

The Beauty of it All

The results of Hadid’s visionary design and Samsung C&T’s ingenuity are undeniable. The completed façade utilizes a field of pixilation and perforation patterns that creates stunning visual results. The exterior of the building also transforms according to the lighting around it. The building will take on different characteristics as the external conditions around it change – at times, it appears to stand alone; sometimes it blends into its surroundings; and at night, the DDP’s shell gracefully reflects the LED glow of surrounding buildings to truly embrace its urban home.

The 4 green spaces constructed on the roof of the building also provide a new green space within Seoul’s dense urban jungle, while at the same time improve the building’s insulation.

The DDP is an amalgamation of a visionary design matched only by the determination of a company to make the impossible happen. Continuously abuzz with visitors from all corners of the globe, including large international exhibitions, futuristic retail stores, and even restored parts of Seoul’s ancient fortress walls, the DDP serves as a vital link between Seoul’s modernity and its storied history. 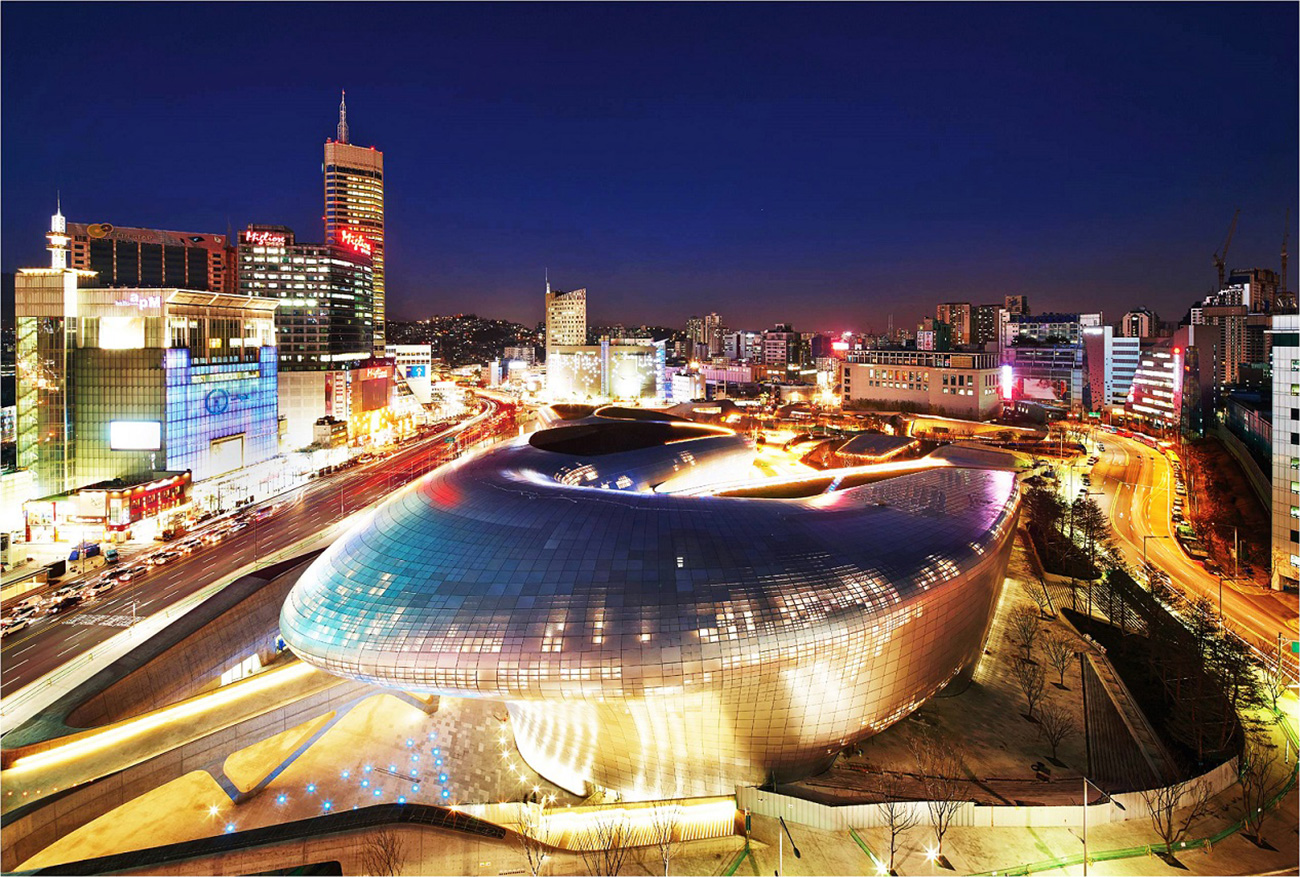 A Behind the Scenes Look at Life in International Sales