A Guide to Korea’s Halloween Haunts

It’s the time of year for ghouls, ghosts, and goblins to adorn storefronts as excitement for Halloween winds up. Though not a holiday traditionally celebrated in Korea, in recent years Halloween has become more popular for both kids and adults as they celebrate fall.

In fact, a 2015 study by online retailers showed that 72% of Koreans were interested in going to a Halloween party. Unfortunately, the same study showed that 69% of respondents had never been able to celebrate.

That’s changing now as more companies across the peninsula are embracing the spooky spirit and offering new ways to join in the fun. If you’ve got the party bug this season, here are three ways to celebrate Halloween in Korea.

Everland has been a pioneer of Halloween celebrations in Korea, going to great lengths to create a scary and exciting experience for guests every year at their annual festival. This year Everland is keeping the thrills alive with Blood City 2, the terrifying sequel to last year’s zombie festival.

Bringing you 73 days of straight horror, the festival runs from August 31st through November 11th and is set in a post-apocalyptic world 10 years into the future in an abandoned city ravaged by a zombie virus. The immersive experience spans 100,000m2 of the theme park, covering the Alpine region, Safari World, and the Amazon Express. 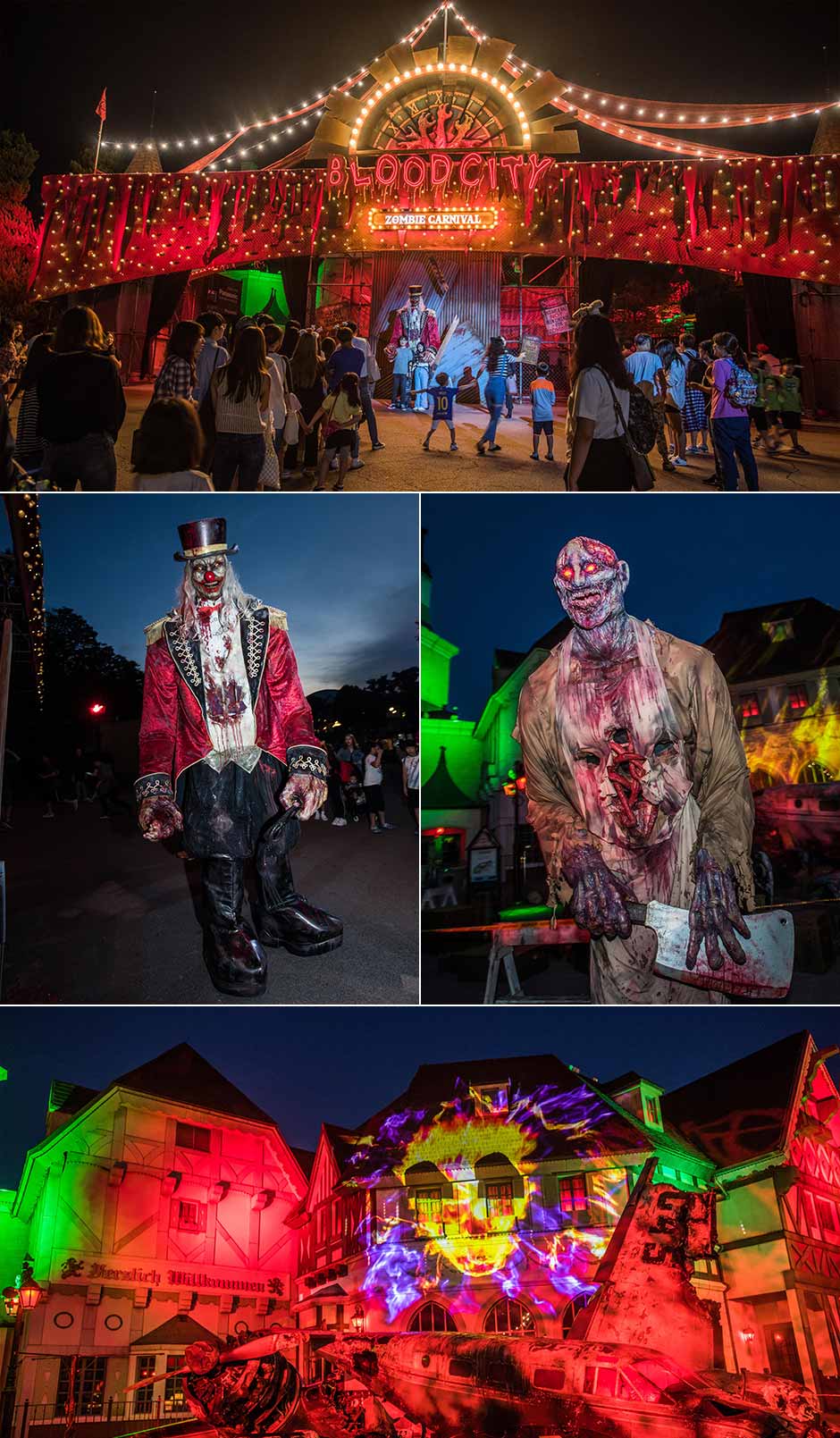 During the festivities, Everland’s most popular rides will transform into a horror show. On the Horror T Express, for example, guests will narrowly escape zombies as they board on the platform, while on the Horror Amazon Express, a large video screen has a scary surprise for guests as they travel along the waterway. Even Safari World gets the horror treatment as it transforms into a zombie-filled nightmare every night.

In addition to scary rides, there are different performances to enjoy. Starting September 7th, Crazy Zombie Hunt 2 will be held every night as dozens of zombies descend on Blood City to strike fear into visitors. The Blood City Alpine Stage will also host performances by the Devil’s Rock band four to five times a day. Guests that want to join undead can visit the Zombie Make-up Salon and become one of the walking dead themselves. ­ 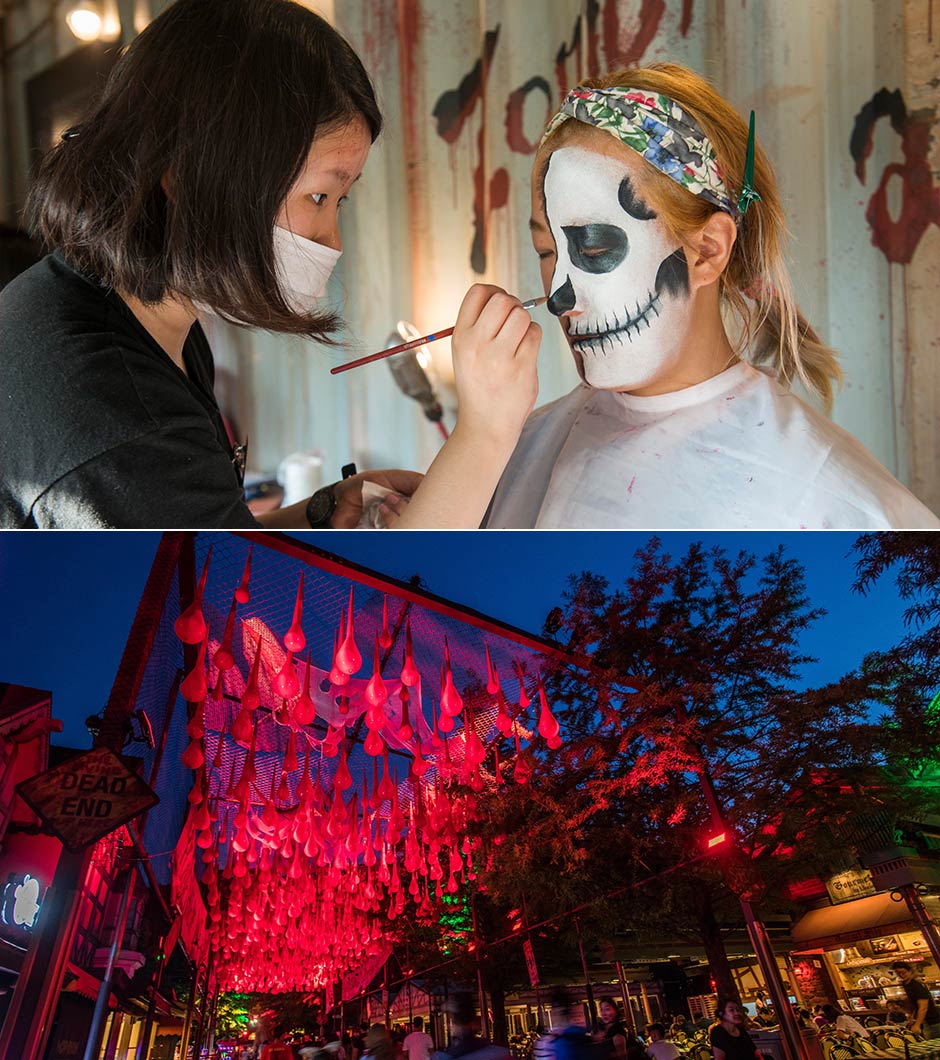 For visitors that don’t want too big of a scare, Everland has created plenty of family-friendly entertainment. Traditional Halloween characters like Dracula, witches, and ghosts, will perform the Happy Halloween Party dance every day on Parade Road and Carnival Square. To satisfy that sweet tooth, kids can get candy during the Trick or Treat performance or at the Mystery Cart event when they successfully complete missions in various games.

2. Party in the City

Seoul is well known for its vibrant nightlife, and in recent years it has fully embraced the Halloween spirit. Across the city, the most popular bars and clubs in Gangnam, Hongdae, and Itaewon celebrate the Halloween weekend with a variety of costume parties and drink specials.

Itaewon, known for being a hub for the international community in Seoul, is perhaps the busiest area to head out to at night, with party-goers often spilling into the side streets as the bars reach full capacity. Hongdae tends to cater to the younger university crowd while Gangnam’s posh clubs go all out with more upscale parties and steeper ticket prices.

Major hotels are also known to gear up for the holiday, offering Halloween pool parties, singing contests, and special Halloween buffets with themed desserts. To get more information on what parties are happening around the city, it’s best to check the websites of local bars and hotels a week or two before the Halloween weekend.

Nothing says Halloween quite like a running for your life as zombies chase you through an obstacle course. That’s the theme of the Zombie Run, a 3km race where participants must collect vaccines as they run away from a herd of the undead.

Each runner gets 3 “lives”, represented by flags attached to a belt, and they must make it to the end of the course with at least one life intact as they deliver the vaccines at the finish line. Those that make it are rewarded with a survivor’s medal. After the run, participants take photos with the zombies and then hit the club to dance the night away. The Zombie Run operates all year round in different cities across the peninsula and has garnered 100,000 runners since opening in 2013. To find out their Halloween schedule, visit their website for more information.

For a more tech-infused event, CNET Korea is hosting a Halloween edition of its Wearable Run. Located in Yeouido, runners can choose from a 5km or 10km marathon course where their progress and health information is tracked on a wearable device. Participants will also be treated to contests and lucky draws. The event takes place on November 3rd, with registration closing on October 24th. For more information you can visit the Wearable Run website.