Who is the true king

One of Everland’s most interesting attractions is Zootopia, which is a full zoo that about 300 animals of 30 species call home. Aside from the lions, tigers, and bears that live there, there are giraffes, elephants, penguins, monkeys, and even a giant tortoise! Zootopia makes up about one fifth of the park’s entire land area, which is hard to miss. But among these animals, who is the best fit to be king? They all have different strengths, so the answers may surprise you.

Who is the best fighter?

One way to be king is to be the best fighter. Lots of animals are good at defending themselves, but only some are also good at fighting with other animals. Among these true predators, two can definitely vie for the prize-fighting championship – the lion and the tiger. But between the two, who would win? After all, there can be only one king. 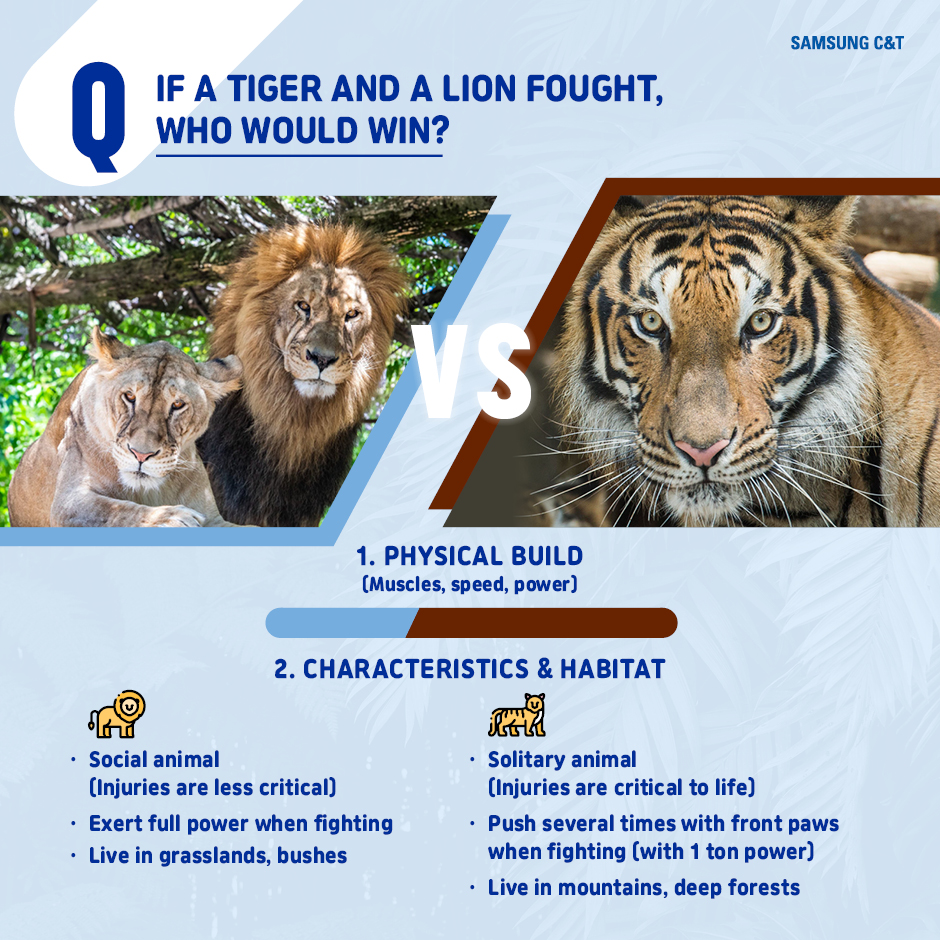 In the end, it probably depends on where they would fight. A tiger would probably win in close quarters in an area with a lot of obstacles, while a lion would probably win on flatter, wider terrain. But, since their habitats differ so greatly, it is rare that they ever meet at all in the wild. So it seems as though each tiger and lion can rule in their own separate habitats. They can both be kings after all!

Large and in charge

But there is another way to become king of the animals without relying on attack power. It is to weigh so much more than anybody else that every other animal just leaves you alone. This is the standard elephant strategy, and Koshik in Zootopia follows this strategy closely.

Koshik loves bananas, and also apples and carrots. But he also loves to eat hay and leaves. The adorable elephant likes to eat pretty much every kind of plant he can get his trunk on. The question then becomes – if Koshik only eats plants, how much can he weigh?

But Koshik has another talent besides being massively kingly – he can also speak Korean! Elephants usually communicate with very deep, low sounds at under 20Hz, which most people can’t even hear, or at very high trumpeting sounds through their trunk. They can’t usually make sounds in the tones that humans do, because they lack any way to articulate those sounds. But clever Koshik has learned to imitate human language by putting his trunk into his mouth and using that to make human-style language sounds. He has a respectable Korean-language vocabulary of words such as “yes,” “no,” “good,” “sit,” and “lie down.”

Older than the place it lives in

Another way one could become king, which is to still be alive after everyone else is dead. Tortoises have always been a symbol of longevity, and there is one currently living in Zootopia. If you could talk to Jangsoo the Aldabra giant tortoise, he could tell you what it was like before Everland ever existed, because he was born 9 years before the park even opened! At 53 years old, Jangsoo has seen more of life than most of the people that come to see him. But since Aldabra giant tortoises live about 120 years on average, he hasn’t even reached middle age yet!

Shaking hands has a long tradition among many cultures, and when they do it, many people test the strength of each other’s grip. A strong grip is an indication of decisiveness and leadership for many people, so a king should have a strong handshake. If that is what it takes to be king, apes are a strong contender!

Chimpanzees and orangutans have one of humans’ greatest strengths – opposable thumbs. They have larger fingertip pads, which help them out when grabbing things. But a big difference between apes and humans is the strength of their grip. With 3-4 times the gripping force that humans can exert, chimpanzees and orangutans can easily grab tree branches, vines and ropes and support their entire body weight for a long time.

Kings need a lot of things to be successful, and one of them is great teeth. A strong smile can go a long way in charming subjects and rivals alike. In the animal world, teeth are also essential, but for a different reason – biting force.

Teeth are critical to almost every single aspect of an animal’s life. Without teeth, animals can’t even eat. They also need them to defend themselves. Most animals use their mouth first when they need to carry something, so teeth are even used for simple tasks.

Out of all the toothed animals at Everland, three stand out as having the strongest biting force. Hyenas, tigers and brown bears are known to have jaws of death, and a hyena’s biting power has been measured to be even stronger than a tiger’s, even though a tiger is an apex predator. Hyenas can bite strong enough to crush bones. So when it comes to biting, or smiling, the hyena may actually be the king of the zoo.

Sometimes life presents unexpected obstacles and ordeals, and in a situation like that every animal needs a herd it can trust. Who better to trust than family? A big family brings stability, and kings need to be stable to be good kings. That’s probably the way that Jangdari and Jangsoon think, a pair of giraffes at Everland’s Zootopia, because they have had more children than any other animals there! 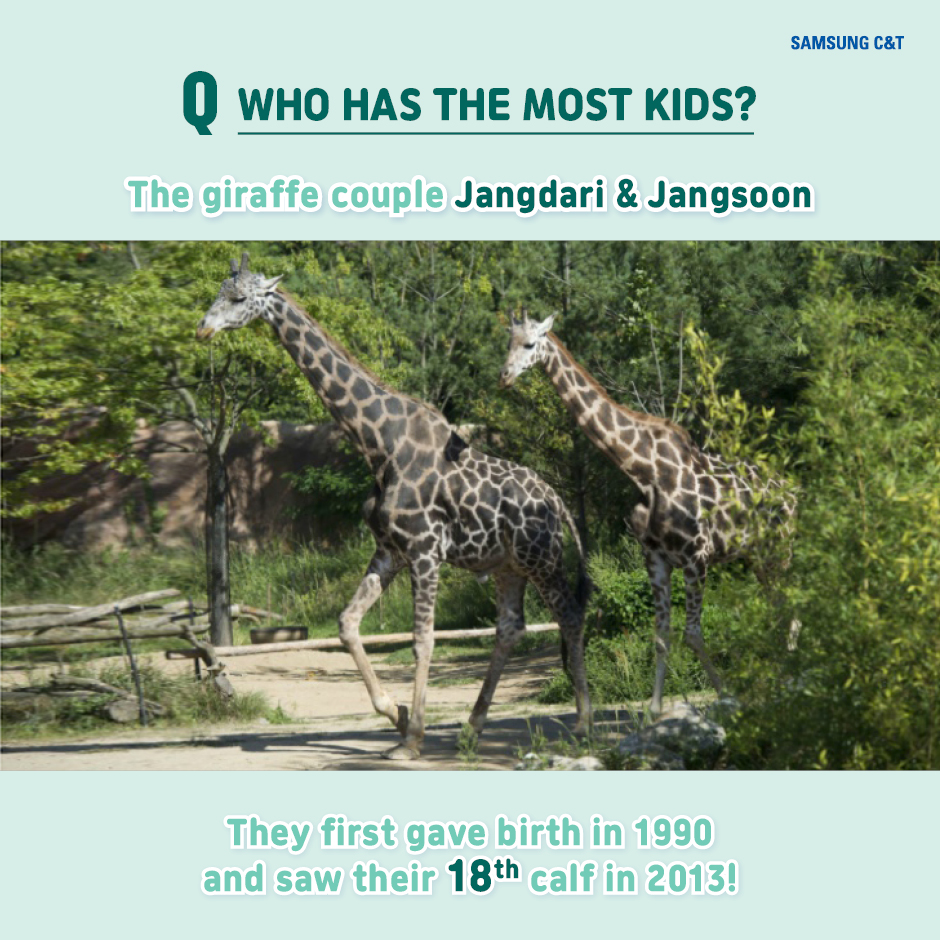 Both members of the loving couple were born in 1986, so they are perfectly matched. They started a family, having their first calf on Sept. 17, 1990. Twenty-five years later, their love still going strong, they celebrated their silver wedding anniversary on the exact same day, complete with a silver wedding ceremony. During their long, steady relationship they have had a total of 18 calves. Jangsoon is a record-breaking giraffe not just at Everland, but also in the entire world, as she has given birth to more children than any other giraffe ever recorded. She is officially registered in the International Species information System as the queen matron of the largest giraffe family ever. Maybe she is the queen of all animals?

While different animals have different traits in common with people, almost all of them share a trait that humans lack – a tail! Having a tail is a definitive trait of what it means to be an animal. So, perhaps having the best tail is the trait of the most kingly animal?

At Zootopia, the two animals with the largest, most magnificent tails are Koshik and Jangsoon. Their tails alone are as tall as a person! Both of the animals use their tails mostly to swat annoying flies and other insects that bother the animals. And if you would determine the royalty of an animal by the size of its tail, you wouldn’t be able to find a more kingly animal than Koshik, or a better queen than Jangsoon!

Engineers, the leaders of construction sites

Out of the woods: Turning waste into energy