Why Water Management Is

Water is one of the most important resources on Earth. In some areas, its availability is a cause of concern, particularly as the world’s population continues to rise.

According to the International Commission on Large Dams, global water demand is expected to increase by 2-3 percent per year in the future. That is why dams are so important in the modern world, as a means of providing the world with clean, well-managed supplies of water.

Harnessing the Value of Water

Dams have been around for centuries, and have evolved over the years. Engineers have gradually found ways to use them to fight the challenges of climate change and help protect communities from potentially devastating floods and other climactic catastrophes.

In modern times, so-called multi-purpose dams have become increasingly common – allowing communities to not only manage their water resources, but also to protect against floods and even generate electricity.

As an expert in construction, Samsung C&T has developed the capacity to build large, multi-functional dams, such as the Youngju Dam in southwest Korea.

The dam was primarily designed to provide clean water to the cities of Youngju, Sangju and Yecheon. In addition, the surrounding area had been prone to flooding from the Nakdong river and Naeseong stream, so the dam was also intended to reduce the risk of flood damage.

What is more, the dam also has power-generating capacities, and has an impressive energy output of 5MW.

Joonhyun Kim, Deputy General Manager of the Civil Sales Team at Samsung C&T’s Engineering and Construction Group, explains that forward-thinking technology was used in the dam’s construction to reduce costs and enhance safety. “We implemented earthworks-related innovations, using rock materials excavated from an area adjacent to the site. That helped us save on construction costs,” says Kim. “We used a GPS-based compaction management system to prevent uneven compaction and reduce the risk of settlement during the construction process.”

Youngju Dam was also one of the first dams in the world to be constructed using Building Information (BIM) software, allowing builders to predict and correct faults prior to construction. In addition, it marked the first time that sediment reduction devices were incorporated into a Korean dam.

Multi-purpose dams can even be built with cultural functions in mind. Youngju Dam was built near the famous 16th-century Sosu Seowon Confucian Academy, and some of its architectural themes reflect aspects of Confucian thinking. The dam features a Space for Cultural Experiences, in collaboration with Sosu Seowon, adding value to the area’s rich cultural worth.

Kim explains, “With multi-purpose dams, you can get a whole range of diverse benefits. Of course these include practical functions like flood control, domestic and industrial water supply and more. But you can also develop dams to incorporate cultural attractions, and even explore ways to make them work as tourist attractions.”

Samsung C&T has been involved in a range of other water management projects, a fact that has helped it accrue the expertise required to create multi-purpose dams.

These projects include wastewater treatment plants and deep sewer tunnels. Notably, the company has worked on a 7.3km deep sewer tunnel project for the Public Utilities Board of Singapore, unveiled in 2005, as well as a 16.1km tunnel completed in Abu Dhabi last year.

Late last year, a Samsung C&T-led joint venture secured a contract from BC Hydro to construct the largest components of the Site C Dam in British Columbia, Canada. This will also be a multi-purpose dam, boasting a hydroelectric power capacity of 1,100 kW.

Meanwhile, Samsung C&T is currently working on an extensive rehabilitation project for the Ddookdo water treatment plant in Seoul. 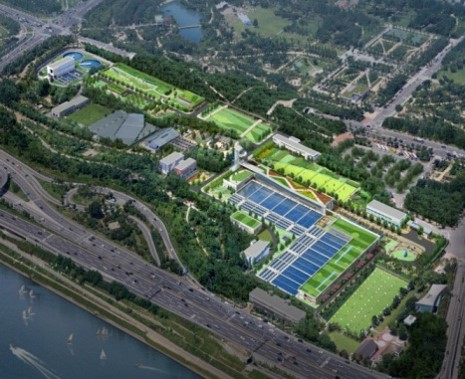 “We also have performed an enormous variety of water projects over the last 30 years,” notes Kim. “In the course of that time we have accumulated a high level of technical expertise and construction knowhow.”

Water management is vital for all urban and rural populations. Without effective infrastructure planning, rapid development is almost unthinkable. In China, for example, before 1949 the country had only 22 large dams. Today it has a staggering 22,000, close to half of the world’s total.

People are now starting to expect dams and other water management infrastructures to incorporate more functionality, such as power generation. That is why companies like Samsung C&T are looking to the future when building important structures like dams – bearing in mind that few things are currently more important than effective water management.