Out of the woods:

As the world continues to seek sustainable energy solutions, some of the answers have been lying around us all the time – like wood pellets!

Wood pellets are a source of bioenergy, natural waste that has been broken down and reprocessed into pellets typically between 1-3 cm in length.

In this article, we will explore why they are considered an important part of the global energy picture, what drives their demand, and how the global market is looking going forward as Samsung C&T is one of the key players in the Asia-Pacific region.

What are wood pellets and why are they important for global energy?

The story of wood pellets goes back to the 1930s, when pelletizing technology was invented in the United States. By the 1950s, bark was being pelleted in the U.S. to reduce waste in the sawmill industry. European countries like Sweden joined the trend, and recent decades have seen more parts of the world use wood pellets for heating and energy applications in the residential, commercial, and industrial sectors. They have even been gaining popularity for use on farms and in stables as animal bedding.

While wood pellets are traditionally made from wood residues – a process we explained here – increasingly, pellets are also produced using agricultural byproducts such as straw. Whatever their ingredients, it is important that they are dry and dense so that they burn consistently and efficiently. Consider that the moisture content of wood pellets can be reduced to as little as 4 percent, compared to 20 to 60 percent for raw biomass. The final product should be uniform and high in energy content.

These properties mean wood pellets offer numerous advantages aside from making good use of waste that might otherwise fill landfills. Firstly, they are convenient. Due to all that energy being packed into pellets of the same size and shape, they are relatively cheap to transport, store, and handle. Their properties mean they also combust consistently and efficiently, providing a comparatively clean source of heat and power – wood pellets release a fraction of the particulate matter emitted by raw biomass when burned.

This all makes wood pellets an important option because almost half of all energy consumption is in the form of heat, and biomass has a 96 percent share in the renewable heat market globally. 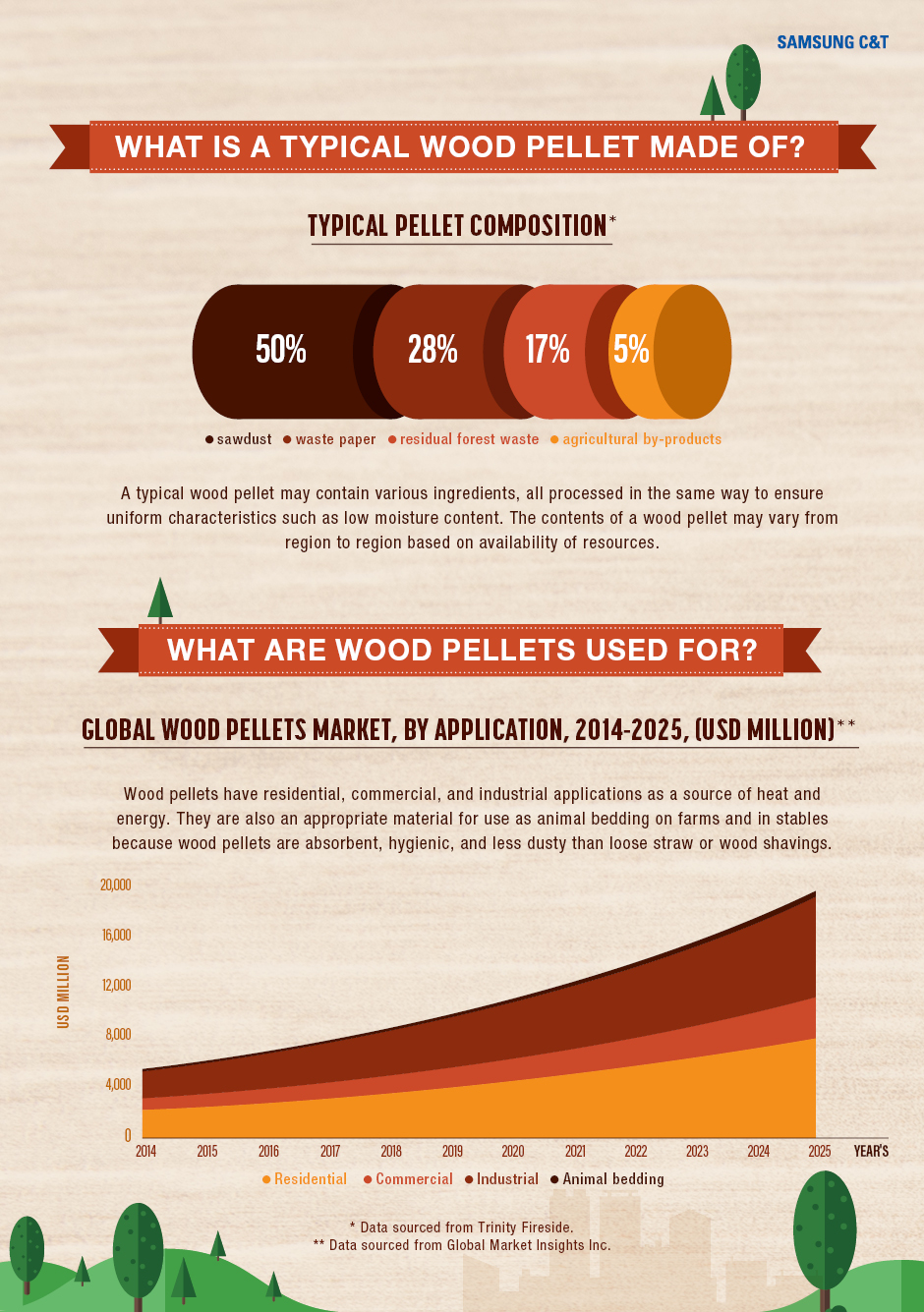 How is the market doing?

In terms of demand, Europe leads the way, but the Asia-Pacific region is rising. In 2018, Europe consumed 75 percent of the world’s wood pellets, with Asia-Pacific accounting for 18 percent as imports rose by 51 percent. Rising demand stems significantly from government efforts to seek alternatives to burning fossil fuels like coal. Across the European Union, for example, wood pellets have been subsidized to the tune of around USD 7 billion per year. Asia’s interest is also particularly worth noting because soaring imports in countries like South Korea, which witnessed the biggest increase in consumption from 2014 to 2018, have also been pushing up wood pellet production in places like Vietnam, Malaysia, Indonesia, and Thailand.

Going forward, the market outlook is also generally positive, with an expected expansion at a CAGR of between 6.12 percent to 9.4 percent up until 2027. And while industries throughout the world have been rattled this year, there is hope that wood pellets will not be too badly affected by the time heating demand spikes in key wood pellet markets next winter.

Samsung C&T’s position has expanded given its role in importing wood pellets to South Korea, which lacks natural energy resources. The country’s increasing demand for pellets is also part of a wider trend due to favorable government policies in South Korea as well as in Japan and China.

Looking a little closer at the situation in South Korea, the country imported 122,000 tons of wood pellets in 2012 – and that number rose to more than 2.2 million tons in 2018, before reaching another high the following year. Currently, Samsung C&T Trading & Investment Group is providing wood pellets to power plants in South Korea. As the international market grows, the company is also aiming to secure a foothold in the international wood pellet supply market by cooperating with rising producers in nations such as Vietnam.

“Keeping pace with the worldwide trend of wood pellets getting attention as an alternative energy source, we hope to perform our roles in the international market,” said Senior Professional Ted Kim from T&I Group.

The good news is that the outlook is particularly positive for Asia-Pacific, which is expected to set the global pace with the fastest CAGR of 14.4 percent from 2020 to 2027. It seems it is true what they say – one person’s waste is another’s treasure.

Who is the true king of Everland’s Zootopia?

What were Korean fashion and lifestyle like in the 1950s and 60s? Wearing Korean heritage